Hydroponics in Homewood: Pitt students at the farm next door 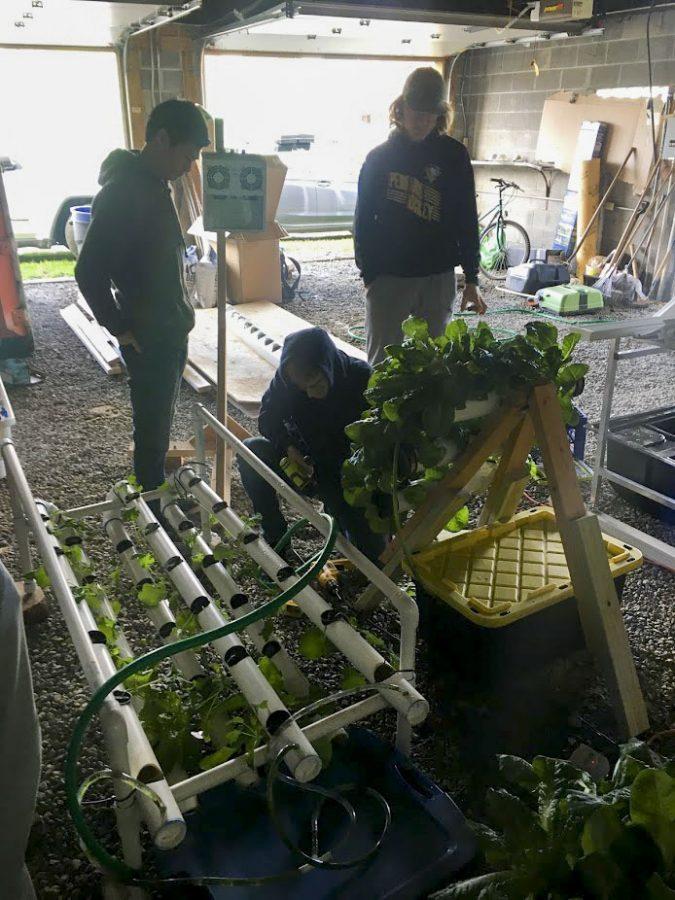 Photo courtesy of Will Sauerland

By Priya Ray, For The Pitt News

Besides numerous health benefits, produce such as kale, lettuce and parsley all share one thing in common — Pitt Hydroponics club has already farmed enough of these vegetables to overflow local food pantries.

Inside a 900-square-foot church garage in Homewood, Pitt students work to construct and maintain PVC-pipe hydroponic systems capable of producing 20-50 plants in a single growth cycle. These systems shuttle nutrient-rich water through pods containing plants encased in growth medium made of corn husks, an alternative to soil.

Club members recently used the staggered vertical growth system — a space-efficient farming system where crops are grown in vertical “stacks,” as opposed to horizontal “beds” on the floor of the greenhouse.

This system has so far yielded 300 heads of lettuce — an unexpected surplus. Currently, they are working on building an additional vertical system funded by a grant from the Pitt Green Fund.

William Sauerland, the club president and a sophomore computer science major, has been with the club since his first year. Sauerland has long been passionate about hydroponics, and stressed the club’s physical presence in Homewood.

“Homewood is considered a food desert,” Sauerland said. “We work with the Oasis Project within the Bible Center Church in Homewood. Their mission is to give the Homewood citizens a place to get fresh produce.”

According to Allegheny County Analytics, Homewood has more than double the eligibility for food stamps than the rest of Pittsburgh.

Luke Persin, a senior biology major and former club president, also believes that outreach is critical in promoting club visibility. Like Sauerland, he has also been with the club since his first year.

“The main idea behind our mission is education and outreach. We do different things around campus, like building minisystems,” Persin said. “This teaches our members a lot about trial and error. Our [adviser] is really into problem-based learning.”

In its intent to help the community around Pitt, the club wants to increase student visibility and engagement both on and off campus. Part of the club’s educational outreach includes hosting a sustainability class at Community Day School in Squirrel Hill, where members are helping to build a brand-new hydroponics system. Sauerland hopes to get students talking about using science to affect change in the community.

“As of right now, we are a lesser-known club,” Sauerland said. “One of the things we are trying to do is get one of our more efficient systems onto campus and educate others about hydroponics and the Mascaro Center.”

Pitt Hydroponics first sprouted in 2015 from the Mascaro Center for Sustainable Innovation, its primary financial backer. The Center’s collaboration with the club is centered on addressing the food shortage in lower-income Pittsburgh areas, especially in colder weather. At one point, the club was able to donate 25 pounds of lettuce to the Pitt Pantry.

David Sanchez, assistant director of the Mascaro Center and the club’s faculty adviser, has been around since the initial student founding. He said he takes a relatively hands-off approach to the club in order to keep Hydroponics a student-run program.

“I want the students to have freedom and creativity. One of the things I provide is resources and technical guidance. We triangulate between me, the community and the students,” Sanchez said. “There is a very deep educational component to it. The students have a lot of responsibility and oversight. I act as a filter to help question and probe.”

Sanchez’s research into water quality and bioremediation — the practice of stimulating the growth of microorganisms in an environment to combat pollutants —  ties into larger applications of the club’s hydroponic systems, which could have positive effects on environmental health.

“Water covers everything from energy to food to landscapes,” Sanchez said. “Looking at the water quality that goes into hydroponics allowed us to take a deeper exploration into more meaningful problems.”

Water quality in Pittsburgh’s three rivers and surrounding basins has long been a source of controversy, especially with the amount of runoff and toxicity from coal mines and fracking in rural areas. A 2016 article from The Guardian reported that nearly 22 parts per billion of lead had contaminated Pittsburgh drinking water, and a 2019 article from StateImpact Pennsylvania reported that widespread coal ash contamination has increased arsenic amounts in local groundwater by 372 times past the safe consumable limit.

According to Sauerland, Sanchez’s research is helping the club conduct its own tests.

“His research is with water quality testing within local rivers. He wants to merge that with our data and collect real-time information on pH and other growing conditions,” Sauerland said. “This will also help with growing efficiency.”

Persin said Pittsburgh’s climate is one of several obstacles the club faces in managing its hydroponics systems.

“We work in a garage without heating, so we can only grow during certain months of the year,” Persin said. “During the winter we grow kale, as that is a colder weather plant.”

Sauerland added that one key issue is maintaining the systems the club currently has in place. The setup is very technical, and more experienced club leaders have to attempt to pass on their knowledge to newer members.

“Designing systems and building them is give and take. It’s not an exact science — you grow a crop, you look at yield. It’s a lot of trial and error,” Sauerland said. “Most people don’t know a lot about hydroponics. It’s a lot of teaching.”

Despite its limitations, Sauerland believes hydroponics represents the future of farming due to its advantages in energy efficiency, retained nutritional value and space.

“You use less water and get a better product,” Sauerland said. “We were able to grow a lot of lettuce in very little space. If you blow up that scale, that’s ridiculous compared to what traditional agriculture can do.”