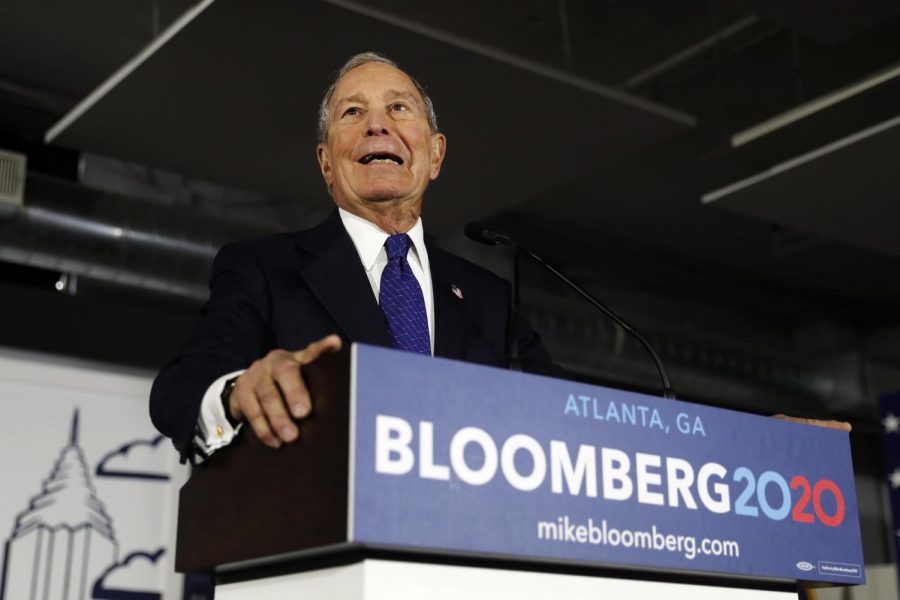 Typically, my favorite way to respond to the mayhem that has become synonymous with the Democratic primary debates is with satire.

I make a joke about former Vice President Joe Biden’s surprise victory in forming coherent, occasionally sensical, sentences. I laugh to myself as I compare Pete Buttigieg, the former mayor of South Bend, Indiana, to a stale pita chip — rather tasteless but surprisingly appealing. Sen. Amy Klobuchar, D-Minn., has the raw grit and determination of a baby pit bull whose teeth haven’t quite grown in yet but who has made headway in gnawing through a chew toy anyway. Sen. Bernie Sanders, D-Vt., truly out-Bernies himself. Sen. Elizabeth Warren, D-Mass., is a shark in a sea of goldfish.

The candidate I struggle to joke about, however, is former New York City Mayor Michael Bloomberg. His obscene personal wealth, deeply troubling political record and corrupt campaign strategy make him one of the largest threats to the integrity of the Democratic Party.

Despite not being on the ballot in some early states, he is working to align himself with several key party leaders and has received some public statements of support, such as from actor Clint Eastwood. Instead of allowing Bloomberg to bulldoze his way through the election, it’s time Democrats stop entertaining the idea of electing a candidate who undermines the ideals we are desperately trying to salvage.

Perhaps the most obvious concern with Bloomberg is his monstrous wealth. In a party that chastises Trump’s exorbitant wealth and business ties, it’s absurdly hypocritical to cut Bloomberg a break on the same issues. The former Republican, turned independent, turned Democrat is pledging his campaign not on his political athleticism, but on his bank account and completely unfounded promises of his electability. With a net worth of $61.9 billion as of Feb. 22, he is ranked as the eighth-wealthiest person in the United States on the 2019 Forbes 400 List. For reference, President Donald Trump is listed as number 275.

His personal wealth should be of particular concern during this time of transition toward grassroots movements. The Democratic Party is undergoing an electoral revolution, most candidates are not accepting donations from fossil fuel companies, corporate PACs, super PACs or federal lobbyists — although the exact breakdown of what someone is or is not accepting varies based on the candidate.

Bloomberg is falsely promoting the same strategy, claiming he will not accept political donations or a presidential salary if elected. The absolute absurdity in this statement, however, is that Bloomberg himself funds Independence USA, a Super PAC, almost entirely. Super PACs are not inherently evil. In fact, a large portion of the $2 million Bloomberg invested in October 2018 alone was in support of seven women running for seats in the House of Representatives who hoped to unseat Republican incumbents. But many key Democrats have criticized PACs for allowing the extremely wealthy, such as Bloomberg, to assert greater influence than ordinary citizens.

Bloomberg’s refusal to accept donations is as gimmicky as it is deceptive. Someone who is wealthier than the bottom 125 million Americans combined should not be praised for refusing donations from the same organizations he funds himself. Whether explicitly from a PAC or not, the money is coming from the same place — his own wallet.

Beyond his personal wealth, Bloomberg contradicts the principles of the modern Democratic Party by boasting an incredibly controversial and troubling political record. In his time as mayor of New York City, Bloomberg implemented stop-and-frisk, a policing strategy that was deemed unconstitutional for blatantly targeting communities of color. In early February, CNN released an audio clip from 2015 that shows Bloomberg defending the highly controversial policy.

“We put all the cops in minority neighborhoods,” Bloomberg said. “Yes, that’s true. Why do we do it? Because that’s where all the crime is. And the way you get guns out of the kids’ hands is to throw them up against the wall and frisk them.”

He also came under fire in the Nevada debate for several non-disclosure agreements with his company. ABC News reported that according to several lawsuits, as CEO, Bloomberg recurrently made sexist remarks that created a misogynistic and degrading culture throughout the company.

“If women wanted to be appreciated for their brains, they’d go to the library instead of to Bloomingdale’s,” he allegedly remarked.

Bloomberg’s professional and political experience should hardly fall in the category of qualifications.

What is perhaps the most troubling facet of the Bloomberg campaign is his campaign strategy itself, which relies on his ability to purchase ads and, as a result, support from the public rather than woo voters in debates. After much speculation, he announced his run for president on Nov. 24, 2019. He finally made his debate debut in Nevada and was met with harsh criticism from the other candidates, particularly Warren and Sanders. He was simply unable to defend himself against some of the most pointed, direct attacks we have seen thus far in the primary race.

My fear, however, is that this may be just as, if not more, effective. Roughly 20 million viewers saw Bloomberg get outperformed and, frankly, embarrassed on the debate stage. However, according to the Guardian, Mike Bloomberg accounts for 69% of political ad impressions on Facebook, nearly six times the amount for President Trump and almost 10 times that for Bernie Sanders. He has spent more than $250 million on television ads, over $40 million on Google and Youtube and $45 million on Facebook in modes of digital campaigning that are not monitored by the transparency tools enacted by Facebook and Google in the aftermath of the disaster of the 2016 election.

He is openly attempting to buy our support. Bloomberg is one of the most terrifying candidates I can remember in modern politics — I started voting during the Trump era. It is imperative that the Democratic Party stand united against the Bloomberg campaign or we, too, may fall victim to the same deceit as the party we are fighting against.

Julia writes mostly about social issues and politics. Write to Julia at jrk142@pitt.edu.