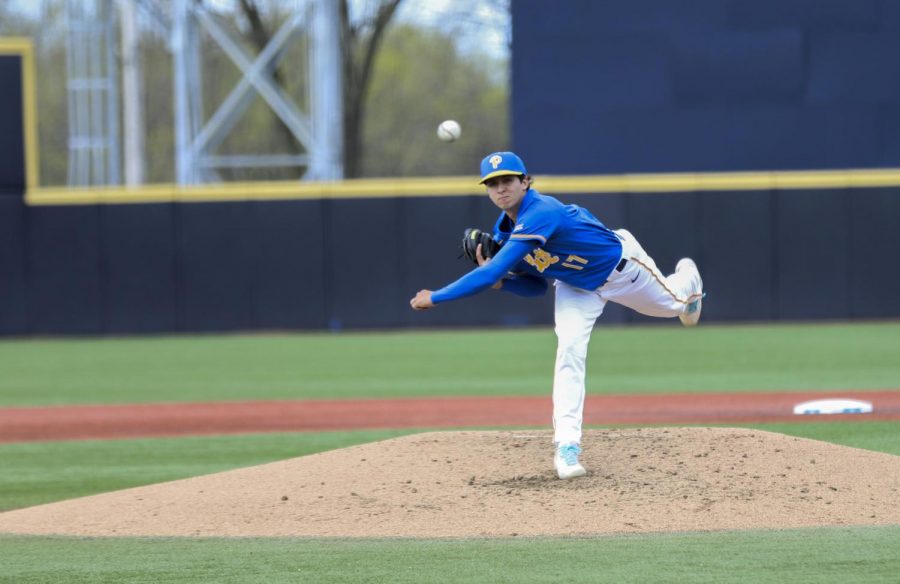 Pitt baseball played its first three-game series of 2020 over the weekend, sweeping Eastern Michigan in Sanford, Florida, and improving to 6-1 on the season.

Pitt baseball played its first three-game series of 2020 over the weekend, sweeping Eastern Michigan in Sanford, Florida, to improve to 6-1 on the season.

On offense, the Panthers picked up right where they left off last weekend, scoring a first-inning run for the fifth time in their five-game old season. Following a two-out single from redshirt senior David Yanni, reigning Office Depot Student-Athlete of the Week Ron Washington, Jr. stayed scorching hot with a double off the wall to give Pitt an early 1-0 lead. Yanni added an RBI of his own in the third inning, scoring senior Nico Popa on a single up the middle. Pitt used some small ball to add to the lead in the fourth, as Popa scored junior Riley Wash on an RBI groundout.

Pitt’s offense seemed poised for another outburst after taking a 3-0 lead through four innings, but the bats were silenced from that point forward, managing only two hits the rest of the way. Eastern Michigan cut the deficit to one in its half of the sixth, before Pitt summoned its bullpen for the final nine outs to secure a win.

Pitt offense took center stage in Saturday’s win, highlighted by a seven-run sixth inning en route to a convincing 10-4 win. After being held scoreless in the first inning for the first time this season, Pitt jumped out to a 1-0 lead in the second on an RBI single from sophomore Sky Duff, and a Yanni two-run home run added to the difference in the fifth. Eastern Michigan tacked on two runs in the top of the sixth before the Panthers put the game out of reach in their half.

Consecutive walks drawn by junior Jordan Anderson and Popa brought in the frame’s first run, before Yanni busted things open with a bases-clearing double. Washington, Jr. followed with a two-bagger of his own before back-to-back singles from sophomore Kyle Hess and junior Samuel Frontino capped off the seven-run inning.

On the mound, junior Pitt starter Mitch Myers lasted 5.2 innings while striking out seven to record his first win as a Panther. After giving up a leadoff single in the first, Myers retired 16 consecutive batters. Redshirt junior Grant Powell took Myers’ place in the sixth inning, escaping his own jam by inducing an inning-ending double play. He worked himself into trouble of his own in the seventh before rolling up another twin killer to avoid any damage. After sophomore Brady Devereux surrendered two runs in the eighth, senior Chris Gomez came in and retired all five batters he faced, finalizing the 10-4 win.

Pitt ended its weekend the same way it started, outlasting the Eagles by a final of 3-2 to complete the sweep. Just as happened on Friday, Pitt’s pitching fueled the win. Junior starter Matt Gilbertson continued his excellent start to the season, throwing seven shutout frames and walking none on his way to his first win as a Panther.

Compared to the season’s first six games, Pitt’s offense got off to a slow start. After being held scoreless through three innings, however, Pitt scored in the fourth and fifth to give Gilbertson, who is yet to allow an earned run this season, some wiggle room. RBI singles from junior Bryce Hulett and Hess gave Pitt a 2-0 lead, and Yanni worked a bases-loaded walk to provide some insurance in the eighth.

Turns out Pitt needed it. Its comfortable 3-0 lead nearly evaporated in the ninth, as a two-out error by Frontino plated Eastern Michigan’s second run and put the tying run on second with two outs. Pitt then summoned first-year Adam Bloebaum to record the final out, which he did on two pitches to record his first collegiate save.

At 6-1, Pitt baseball is off to its best start since 2017. The Panthers will be back in Sanford on Friday, Feb. 28, for a double header against Lehigh at 1 p.m. and Central Connecticut State at 5:30 p.m. Pitt will remain in the Sunshine State for the entirety of the weekend, with rematches already set for Saturday against the Hawks and Sunday against the Blue Devils.