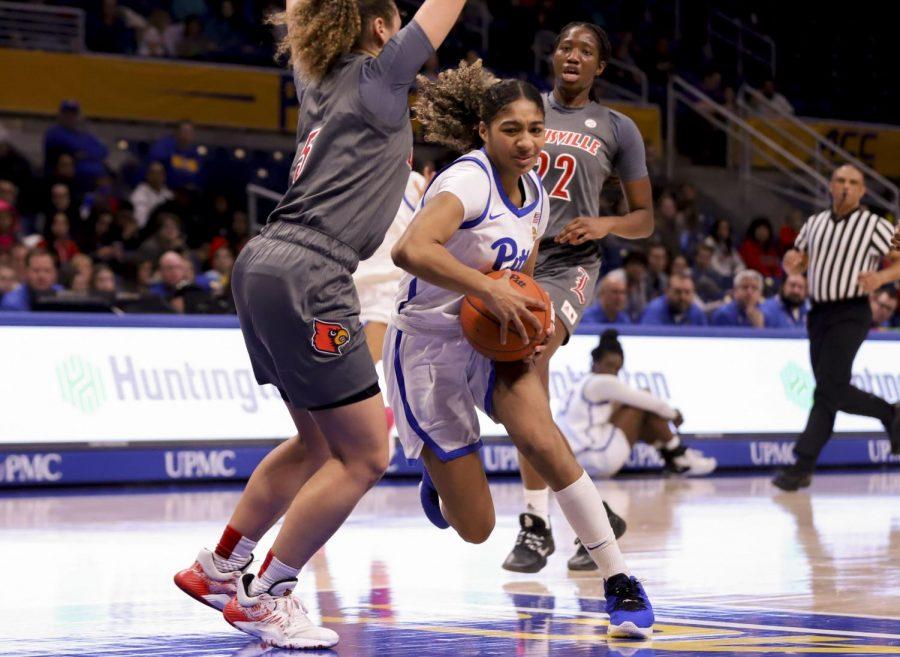 Pitt women’s basketball fell behind early in the second quarter and never recovered, en route to a 79-47 defeat on Sunday afternoon at the hands of No. 5 Louisville.

The Panthers (4-23 overall, 1-15 ACC) were unable to channel the emotion of senior day into their play. Head coach Lance White was disappointed with his team’s effort, particularly with transition defense and rebounding, against the Cardinals (25-3 overall, 14-3 ACC).

But the day’s seminal story took place before the game even tipped off. The Panthers acknowledged three players on the court beforehand. Redshirt senior guard Aysia Bugg and two of Pitt’s former guards, senior Alayna Gribble and current Cardinals redshirt senior Yacine Diop, were all included as part of their senior day festivities.

Gribble was medically disqualified after suffering too many concussions and Diop, who played for Pitt from 2014-18, was a four-year teammate of Bugg’s before transferring to Louisville.

But he focused on the seniors — particularly Diop — for their contributions to Pitt basketball the last two years. Despite her transfer, White wanted Diop to remember her years at Pitt fondly.

“Obviously Yacine for a long time was a great player here and I wanted to honor her,” White said. “This is home and I want those kids to feel that and be a part of it. I told Yacine after the game that whatever she needs, whatever it is, is that this is still a part of her journey … I think kids got to make choices for themselves and at the end of the day you have to treat people the way you want to be treated.”

Similarly, first-year guard Dayshanette Harris — who has had to pick up the scoring slack since Bugg went down with an injury Feb. 1 against Florida State — was extremely thankful for Bugg’s guidance this past season.

“Bugg has taught me a lot in just one year, so it’s kind of sad to see her go,” Harris said. “I’ll forever be grateful for Bugg for leading me my freshman year.”

But nevertheless there was a game to play, and Pitt was blitzed early. Even with the Cardinals down junior Dana Evans and sophomore Elizabeth Balogun, who combine to average 27 points per game, Louisville overpowered the Panthers.

They started off the quarter on a 16-0 run, spearheaded by Diop, senior guard Jazmine Jones and senior forward Kylee Shook, who scored seven, five and four points on the run, respectively.

The Panthers were able to cut the lead down to single digits with a 10-2 run themselves. Harris — who posted a career high 27 points last time out against Boston College — tallied eight points during the run.

Louisville once again delivered a timely counterpunch and entered halftime with a one-point lead off the strength of an 8-2 burst.
The Cardinals smoked Pitt’s defense in the second period with a 10-15 mark from the field and a perfect 5-5 from the free throw line, while Pitt shot only 4-14 and 2-7 from 3-point range.

Pitt’s abysmal play continued into the third quarter, as it shot 13.3% from the field, scored five points and went over six minutes without a field goal.

Their poor defensive play continued. Pitt allowed 24 third quarter points, led by Shook who was a perfect 4-4 from the floor. The Cardinals lead 63-29 going into the fourth quarter.

Like the previous four games, Pitt played much better in the fourth quarter with their opponent’s best players resting as the lead ballooned. Junior guard Gabbie Green scored eight points to lead Pitt, including two makes from 3-point range.

With Sunday’s loss, Pitt’s losing streak extends to seven, and they have now recorded the second most losses in a season in program history. Their 15 ACC losses are now the most in program history since joining the conference in 2013.

While the season has been long, first-year forward Rita Igbokwe — who moved into second all-time for blocks as a first-year at Pitt with a pair of rejections against Louisville — enjoyed playing this year at the Petersen Events Center and thought that the experience has grown her game.

“I’ve learned a lot at the Pete,” Igbokwe said. “I’ve wanted to play in different atmospheres to play under different circumstances and to just have fun. I’ve learned a lot from my teammates, the coaching staff even from myself, just like, you gotta go out there and have fun.”

Pitt will finish the regular season with two road games, the first on Thursday against Virginia.