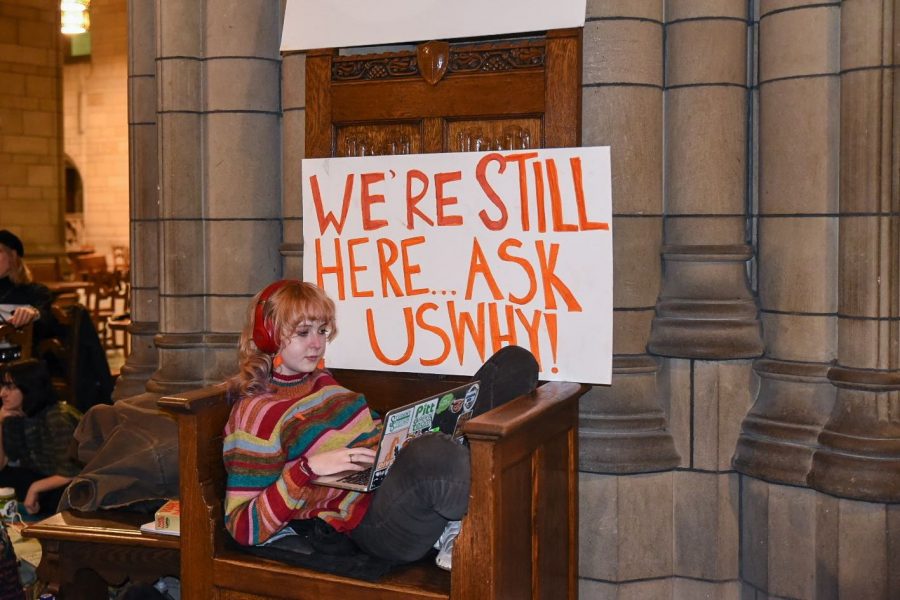 The Fossil Free Pitt Coalition is currently staging a sit-in in the Cathedral of Learning lobby, in an effort to convince Pitt to stop investing some of its $4.3 billion endowment in the fossil fuel industry.

The occupation began last Friday at noon, one week in advance of this Friday’s meeting of the Board of Trustees. It follows a Feb. 13 rally outside of the Cathedral on Fossil Fuel Divestment Day.

The group has stated several demands for the sit-in — for the Board of Trustees to divest from fossil fuels at its Feb. 28 meeting, trustees with direct ties to the fossil fuel industry to abstain from the vote, the inclusion of a public comment period at board meetings and for students to “have a seat at the table” regarding any ensuing reinvestment decisions.

In a Friday statement, Pitt spokesperson Kevin Zwick said Pitt’s Board of Trustees will consider proposals made by Chancellor Patrick Gallagher based on the findings of Pitt’s Socially Responsible Investing Committee from summer 2019. This includes an update on Environmental, Social and Governance criteria, a resolution on an SRI process that allows community concerns to be considered in making investment exclusions and a resolution of support for Pitt’s commitment to become carbon-neutral.

Here are day-by-day updates on the sit-in:

Some FFPC protesters ventured outside of the sit-in on Thursday morning to hand out flyers at the meeting of the Properties & Facilities Committee of the Board of Trustees. FFPC organizer Annalise Abraham said protesters gave out information about the sit-in and reasons the Board should vote to divest.

“We gave out flyers about FFPC to them and all of the news articles we have that mention us to make them more aware of why we’re doing this and why we want them to divest,” Abraham said.

Abraham said security and facilities staff continue to move through the sit-in area, ensuring the occupied space is relatively calm and clean. She added that overnight building cleaners have been willing to make life a little easier for protesters.

“They used the floor cleaner before we all slept so we didn’t have to move anything,” Abraham said.

The protesters have also held study groups to educate attendees on environmental issues, such as the one on Thursday afternoon on indigeneous Canadians, specifically the Wet’suwet’en Nation, and their fight to maintain sovereignty over their land.

Jerry Dickinson, a candidate for Pennsylvania’s 18th congressional district and a Pitt Law professor, joined protestors in a modified version of the popular folk song “She’ll Be Coming ’Round the Mountain” Wednesday afternoon in the Cathedral to commemorate the 125th hour of the Fossil Free Pitt Coalition’s sit-in. Prem Rajgopal, an organizer and graduate student in sustainability engineering, said the protesters changed the lyrics of the song to be specific to the sit-in.

In addition, the group was visited by Veronica Coptis, executive director of the Center for Coalfield Justice. According to Rajgopal, she and several of her colleagues stopped by the Cathedral to express their support and “reach out to her followers and spread the message of what [FFPC is] up to.”

Later in the day, the group was visited by Marita Garrett, the mayor of Wilkinsburg. Garrett, who is currently teaching PUBSRV 0050 Ethics and Accountability, brought her students to speak with protesters, Rajgopal said.

Several organizers also met Wednesday with University Chief Financial Officer Hari Sastry. While Rajgopal declined to go into detail on the content of the meeting and name the other members of the group who spoke to Sastry, he did say that the group spoke generally about divestment.

“While we had a successful meeting with Hari, and we don’t hold him accountable for the board or our chancellor,” Rajgopal said, “we strongly believe that the chancellor needs to be communicating with the Board of Trustees that they need to vote to divest and that this cannot be dragged out.”

Protesters sang the popular folk song, “We Shall Not Be Moved,” at 4 p.m. in the Cathedral to commemorate the 100th hour of the Fossil Free Pitt Coalition’s sit-in. Prem Rajgopal, an organizer and graduate student in sustainability engineering, said the protesters changed the lyrics of the song to be specific to the sit-in.

In addition to students, Dutch journalist Emile Kossen visited the protest while in the Pittsburgh area to cover the Shell ethane cracker plant in Beaver County. Kossen works for Elsevier Weekblad in the Netherlands and stopped by the Cathedral to learn more about how the Pitt student body is responding to the divestment debate.

“It was really cool to see someone from a different country who was here to cover a local issue that matters to a lot of us be enthralled by this protest,” Rajgopal said.

Monday was the first full academic day for the sit-in, with the Cathedral abuzz with student, faculty and staff foot traffic. Prem Rajgopal, an organizer and graduate student in sustainability engineering, said the protesters consolidated their space, and engagement continued with community members.

Anaïs Peterson, executive vice president of Student Government Board and an organizer, said FFPC plans to hold several teach-ins this week on topics related to fossil fuel divestment, such as environmental health and Shell’s cracker plant in Beaver County, as well as the group’s standard Divestment 101 workshop.

Peterson said about 30 students have slept in the Cathedral each night since the protest began, with students filtering in and out through the night.

State Rep. Sara Innamorato, D-21st, visited the sit-in on Sunday afternoon. She encouraged community members in a live-streamed video on Twitter to attend the occupation.

“You can show up, too,” Innamorato said. “More importantly, if you are affiliated with the University of Pittsburgh at all, make sure you contact them and let them know you support divestment.”

Members from several local advocacy organizations, including Sunrise Pittsburgh, 350Pittsburgh, Community & Students for All Workers, USAS Local #31 and Pitt Prison Outreach club, also stopped by the sit-in throughout the weekend to show support.

The occupiers stepped outside of the Cathedral on Sunday evening to sing songs, such as “Solidarity Forever” and “We Shall Overcome,” to keep up morale.

FFPC launched its Cathedral sit-in on Friday at noon. Organizer Annalise Abraham said Friday afternoon that there is no set time limit on how long FFPC plans to occupy the Cathedral — members plan on staying as long as possible, including overnight, until they receive a response from Pitt.

“We’ve made our demands clear to the University, and the information has been readily clear to them for years now about why they should divest,” Abraham said.

Abraham said organizers are trying to build off of that momentum with the sit-in — the largest statement FFPC is making to date.

“We’re hoping that once other students see what we’re doing they’ll come and join us,” she said. “We’re planning to have as many people here as possible all the time.”