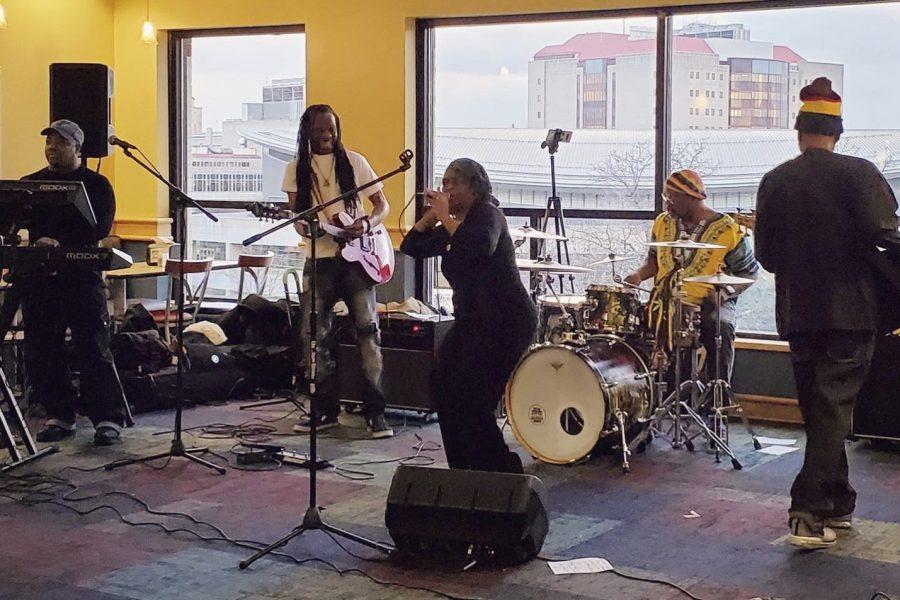 The Flow Band, one of Pittsburgh’s oldest reggae bands, performed at the Perch on Thursday night as a part of the Perch’s Black History Month dinner.

A live performance from one of Pittsburgh’s oldest reggae bands, The Flow Band, serenaded visitors eating at the Perch Thursday night, accompanied by the smell of Afro-Caribbean dishes, such as spiced beef cheek stew.

All of this was part of the Perch’s annual Black History Month dinner. When planning the event, Pitt and its dining contractor Sodexo decided to focus on Afro-Carribean dishes, featuring food from Jamaica, Haiti, Trinidad, Barbados and other areas. The dishes offered at the event included a Haitian legumes dish, Trinidadian shrimp curry and Jamaican-style greens called callaloo. Sean Minihan, the culinary director of Sodexo at Pitt, said they adapted cultural recipes to serve to Pitt students.

“We did a stew that was made up of a beautiful array of different vegetables and beans, and it’s themed after kind of a Haitian recipe that we always use but never in a vegetarian sense,” Minihan said. “And then we thought, ‘What’s a good way to kind of really represent Jamaica?’ So we took the Jamaican seasonings and grilled it on chicken thighs.”

The chefs strove for authenticity when it came to representing these cultures through food by taking advice on the event from student organizations, like the Black Action Society, African Students Association and Student Government Board. Abdou Cole, the Sodexo district manager, said they made sure to research the dishes and involve student input by consulting the student organizations.

“Our Chefs did extensive research on the dishes to ensure proper ingredients and techniques are used to elicit the most authentic flavors,” Cole said in an email. “We all kind of met to throw ideas out, and based on that conversation came up with the ideas that you kind of see for Black History Month this year.”

After coming up with ideas, Minihan said the menu goes through different stages of testing.

“We turn it over to all the different layers across campus,” Minihan said. “We make sure the nutritional folks get a chance to look at it, they go through it, make sure that it all fits within the confines of making sure that it’s healthy and it’s great.”

“Sometimes when we think of Black History Month or the foods related to black culture, it’s often just soul food that we think of, and we sort of don’t think of those Afro-Carribean-influenced dishes,” Grover said.

Though this year’s food choice is Afro-Caribbean, The Perch features a different type of food each year, as well as a new theme for the event. This year’s theme was celebrating black arts through food.

Organizers put up portraits of Afro-Caribbean artists, such as Wyclef Jean and Garcelle Beauvais, and arranged to have The Flow Band, Pittsburgh’s oldest reggae band, accompany the dinner. According to Cole, the organizers chose The Flow Band to perform specifically because the focus was on Carribean culture. Deborah Sterling, the band’s lead singer, said the band has been performing for more than 30 years and traveled throughout the United States.

“Flow Band’s been around for 33 years. I’ve been with the band for 25 years and the leader of the band just passed away. But we’ve traveled everywhere, Chicago, New Orleans, Ohio, West Virginia. Mostly reggae, and then when I came I introduced a little jazz to the band, a little R&B,” Sterling said.

The Flow Band will also be performing at the dinner in Market Central on Thursday, where the cooking of Brooke Walker, a junior at Pitt who’s started her own business called Healthy Soul, will be featured at the Mindful station in Market Central. Grover said Walker’s focus on nutrition prompted Sodexo to invite her to collaborate with them on a meal.

“She’s putting a healthy flair on traditional soul-food dishes, so she’ll be featured at our Mindful station on the Black History Month dinner on Thursday,” Grover said.

The dinner in Market will feature a larger variety of foods than in the Perch, including traditional soul food and African dishes. Minihan said the organizers wanted to have a large array of different flavors for the dinner.

“The important part is that we add in variety, so that everybody has the chance to taste all the different flavors. The flavors that you’re going to taste down in Market will not be the same that we did up here,” Minihan said. “We thought it was a great idea to really highlight what those regions were. Down in Market you’re going to see a little more diverse of a menu.”

While the Black History Month dinner has a different theme every year, Cole said the common thread across the years is that the organizers work to promote diversity through encouraging new experiences.

“One of our goals of Black History Month is to promote understanding, diversity [and] inclusion,” Cole said. “So we like to put things in front of you that is new to you, that you have not experienced, that is outside of your comfort zone.”