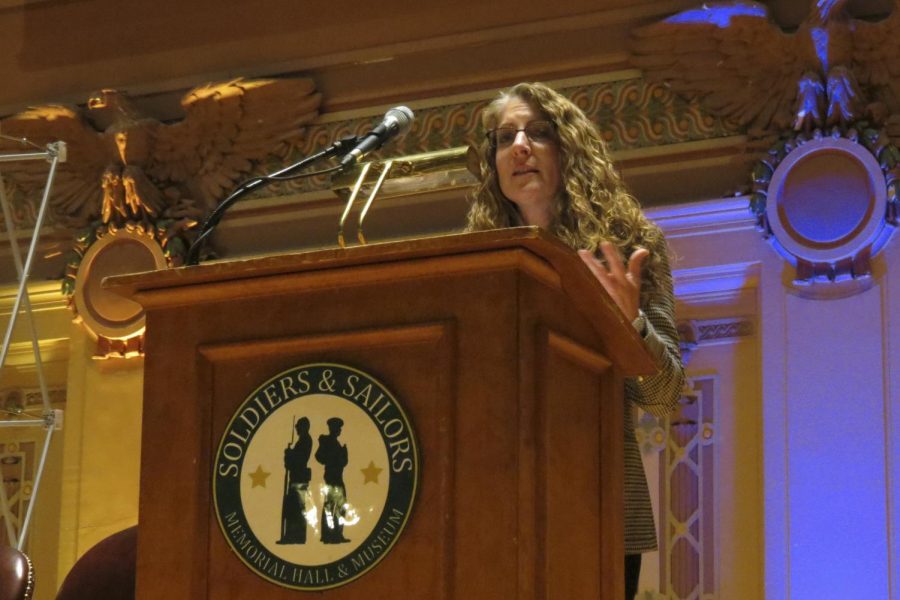 Evelyn Piazza, mother of hazing victim Timothy Piazza, speaks about the dangers of hazing and the toll it has had on her family at Monday evening’s “Turning Tragedy into Progress” at Soldiers and Sailors Memorial Hall.

Evelyn Piazza’s voice wavered as she asked audience members to put themselves in her shoes.

“Close your eyes and imagine that your brother is going to pledge a fraternity, and it started last night,” Piazza said. “You get a call that he didn’t come home last night, and that’s not like him. You decide something’s wrong. You call the hospital to see if he’s there. They tell you yes, there’s been an accident.”

Several hundred Pitt community members gathered in the Soldiers and Sailors Auditorium on Monday night for “Turning Tragedy into Progress” — an anti-hazing presentation featuring Evelyn Piazza and Rae Ann Gruver. Piazza and Gruver, whose sons both died during fraternity hazing in 2017, spoke about the dangers of hazing and the toll it has taken on their families.

The event was hosted by the Anti-Hazing Coalition, a group dedicated to ending hazing through talks like this, as well as community outreach and efforts to strengthen anti-hazing legislation. The group was created through collaboration between the National Panhellenic Conference, the North American Interfraternity Conference and parents like the Piazzas and the Gruvers who have lost their children to hazing.

Piazza’s son was a 19-year-old sophomore engineering student when he died. He dreamed of one day working to develop prosthetics for the disabled.

“He kind of had his life figured out,” Piazza said. “He was going to major in mechanical engineering so he could have a career designing prosthetics, go to grad school, eventually marry his high school sweetheart and just have fun with his brother and friends.”

Since their son’s death in 2017, Evelyn and her husband Jim Piazza have worked to get anti-hazing legislation passed to prevent more deaths like their son’s from occurring. The Timothy J. Piazza anti-hazing law was signed by Pennsylvania Gov. Tom Wolfe in December 2018 after the Piazzas pushed for tougher state legislation to combat hazing.

The legislation requires all universities that receive federal funding to publicly release biannual reports on any code of conduct violations that occur within student organizations that may threaten the safety of students.

Gruver’s son was described by his mother as a “gentle giant,” who loved sports and was studying journalism.

“Max was a gentle giant, a sweet soul,” Gruver said. “He had a big smile, and an even bigger hug. And he was always someone who took care of the people around him.”

Since their son’s death in 2017, Rae Ann and her husband Steve Gruver have been working to get new anti-hazing laws passed in Louisiana and founded the Max Gruver Foundation — a nonprofit organization working to end hazing on college campuses.

Gruver detailed the hazing her son endured the night he died — which included a Q&A on the history of the fraternity where, if a pledge got a question wrong, they were forced to take a pull from a bottle of 190-proof diesel grain alcohol. According to Gruver, Max was forced to drink nearly 32 ounces of diesel in the span of two hours.

“Max had gotten some answers wrong, and had been late to other hazing events,” Gruver said. “Certain fraternity members had singled him out. The actions taken by these hazers resulted in my son’s death.”

The event also focused on defining hazing and detailing steps that Greek organizations must take in order to prevent hazing from occurring. The speakers defined hazing as any action taken or situation created intentionally that causes embarrassment, harassment or ridicule, and risks emotional or physical harm to members of a group or team — regardless of a person’s willingness to participate. Piazza and Gruver emphasized that no type of hazing is acceptable — even if participants are willing and there is no alcohol involved. They also talked about the dire consequences that can come with hazing others.

Hazing is a felony in 12 states — including Pennsylvania — and can result in up to five years in prison and up to $5,000 in fines. Piazza urged students to report any and all instances of hazing with no exceptions.

“Maybe your fraternity gets put on probation for a semester, but so what?” Piazza said. “What if you don’t call for help? What happens if someone is seriously damaged or dies? That will be on your conscience for the rest of your life.”

Sam Kelly, a junior psychology major and a member of the Phi Gamma Delta fraternity, said Piazza’s testimony about her son really resonated with him.

“I have an older sister, so when [Piazza] asked us to picture our own sibling in the same shoes as Tim, picturing that in my own head was very hard to get through at times,” Kelly said.

Elizabeth Midey, a first-year in the pre-pharmacy program, commented on the importance of spreading awareness of hazing on college campuses.

“I know hazing is an issue within many college campuses and even within our campus,” Midey said. “This kind of event can help us be more thoughtful and more accountable about preventing hazing and other similar issues.”