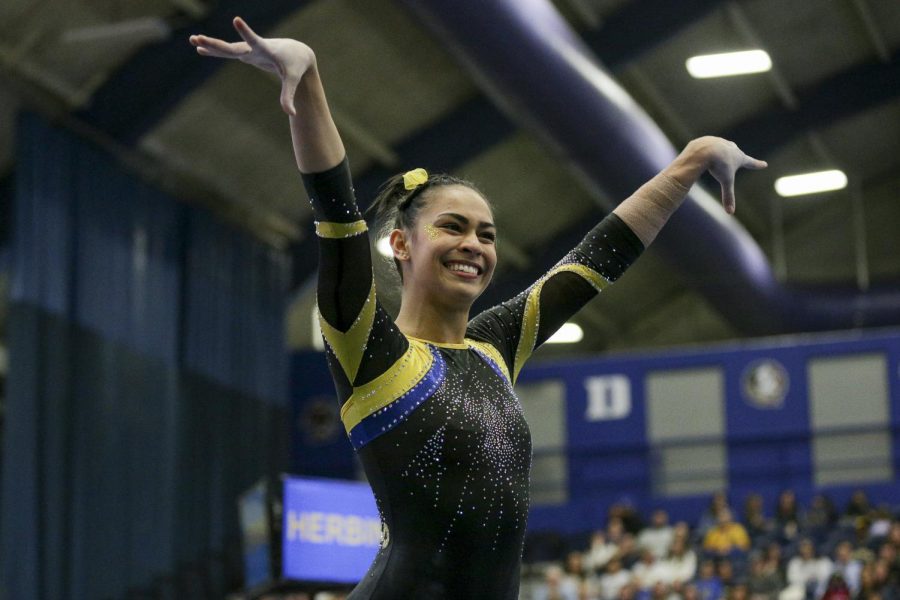 Despite recording a season-high 196 points in Monday night’s dual meet at No. 19 Southern Utah, Pitt gymnastics fell just shy of its Cedar City hosts, who bested the Panthers with a score of 197.075.

The nationally-ranked Thunderbirds — nicknamed the Flippin’ Birds — entered the event with an average team score of 195.925. That score would’ve seen them fall prey to the Panthers, but the Flippin’ Birds mustered up one of their best performances of the season to emerge victorious.

As she has throughout much of the season, senior Michaela Burton led Pitt with its highest scores of the night. She tied a career-best 9.875 for her floor routine, earning fourth place, and recorded the same score on the balance beam to earn second place.

Pitt started off the match in a strong fashion, scoring a season-high 48.850 combined points on the uneven bars. Burton led Pitt with a 9.850 in the event, while first-year Ciara Ward tied her career high of 9.825.

But the Flippin’ Birds showed what makes them one of the toughest opponents in the country by sweeping the top three places in the bars for a total of 49.250, establishing a lead they would not relinquish.

The Panthers followed up the bars with another season-best team score of 49.050 on the vault, in large part thanks to a career-high 9.850 from first-year Emily Liszewski to place third. Ward continued her strong night with a career-high 9.825 and sophomore Olivia Miller earned a season-high 9.800.

Southern Utah put forth its most dominant performance for the floor exercise, earning five of the top six places. Only Burton managed to infiltrate the elite flock of Flippin’ Birds.

Pitt finished the night with a quality showing on the balance beam, as Burton’s second-place finish marked the team’s best of the meet. Senior Deven Herbine also contributed a career-best 9.850, while Miller tied her career-best 9.800.

Southern Utah sophomore Karley McClain was the star of the night, snagging first-place finishes on the beam and floor, second on bars and fourth on vault for an incredible all-around score of 39.525.

Pitt’s next test comes this Sunday afternoon at Morgantown in a tri-meet with West Virginia and Rutgers.