Eric Macadangdang celebrates with his slate and supporters after winning the SGB presidential election on Tuesday night.

By Anushay Chaudhry and Benjamin Nigrosh

Eric Macadangdang will serve as president of Pitt’s Student Government Board during the 2020-21 school year, after narrowly winning Tuesday’s elections against Ravi Gandhi with 50.2% of the vote — a margin of 22 votes.

“This election campaign allowed me to meet a lot of great people,” Macadangdang said. “I can’t wait to spend the next year advocating for them.”

Macadangdang, a current SGB member who ran on the Voices slate, focused his platform on opening communication between students and SGB through a campus-wide survey that would provide the board with student opinions from across campus.

He also said he hopes to expand debt-relief programs for students like Panthers Forward. He will be joined on the board by fellow slate members Kathryn Fleisher, Annalise Abraham and Ben King. 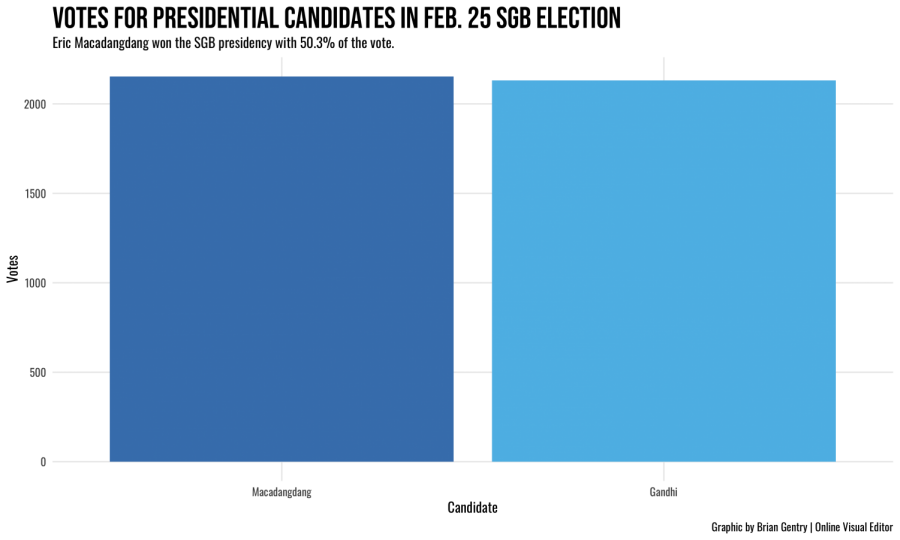 Gandhi said running for president was “really fun and an awesome learning experience,” and feels thankful for all of the work his running mates put into the campaign.

“The fact that we got so much turnout is incredible,” Gandhi said. “Even before running, I knew Eric would have done a great job as president, regardless.”

Victor So, Katie Richmond and Victoria Chuah from Your slate will join the board, even though Gandhi, their presidential candidate, did not win the presidency. Tyler Viljaste of the Launch slate will also join the board.

Cedric Humphrey, the other half of the Launch slate, will serve as executive vice president next academic year, after receiving the most votes of all board candidates in the race.

“I feel amazing,” Humphrey said. “Campaigning is hard, the last three weeks have been hard, but I’m very excited to be back on Student Government Board, being VP, being able to handle the assembly next year and really make this campus a better place. And I’m even more excited for Eric, because he deserves to lead this campus.”

In last year’s elections, Anaïs Peterson and Caroline Unger tied for the highest number of votes for a board seat at 1,154 each. The executive vice president position remained unfilled until a runoff election held early the next month, when students voted Peterson into the position.

Of the nine candidates running for eight board seats, independent board candidate Aman Reddy did not win enough votes to secure a spot on the board.

Students also voted 3,646 to 566, or 87%, in favor of a Tuesday referendum — proposed by Peterson — on whether Pitt should raise the minimum wage for student workers to $15 per hour. 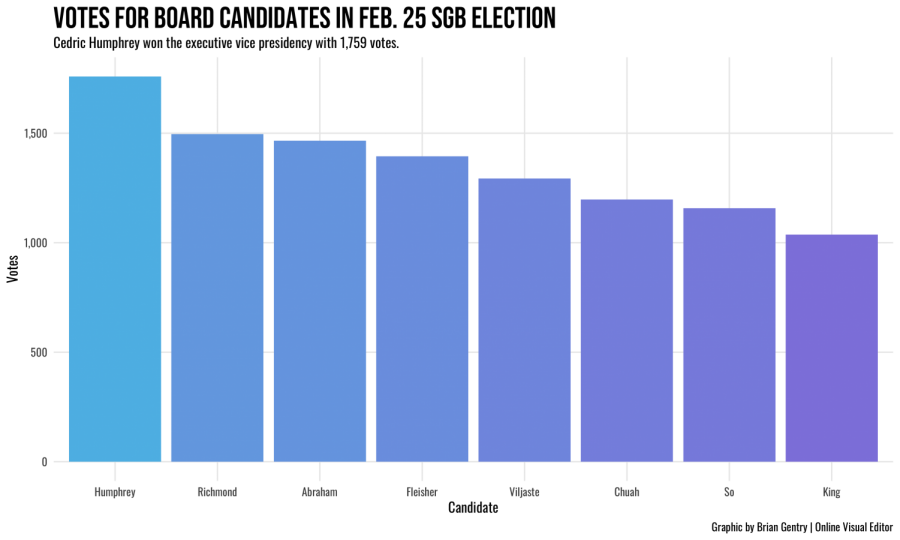 Chuah, along with her future fellow board members Richmond and So, had no prior experience with SGB. She said despite not being able to serve on the board with fellow slate mate Gandhi, she is excited for the board’s future.

“I am really sad that we all couldn’t stay together, but I’m really proud of what we accomplished,” Chuah said.

All members of the current board are students in the Dietrich School of Arts and Sciences, with the exception of board member Lynn Dang, who is a student in the business school. This ratio of inter-school representation will change next year, with future board members Richmond and Chuah, who are both students in the Swanson School of Engineering.

Jami Stuckey, a sophomore bioengineering major, said she was excited to have more representation for engineering students on the board, but school loyalty did not completely influence her vote.

“I didn’t vote only for engineering students,” Stuckey said. “I think it’s kind of counterintuitive to say that engineers don’t have any representation and then vote for all engineers so that Dietrich doesn’t get any representation. So I tried to get a mix.”

Despite broader student representation, Manal Sayyed, a sophomore economics and psychology major, said she didn’t feel like this year’s slates engaged with the student body as much as others had in past elections.

“I feel like I saw more last year before the election that it was going to happen, and what the initiatives were last year more than this year,” Sayyed said. 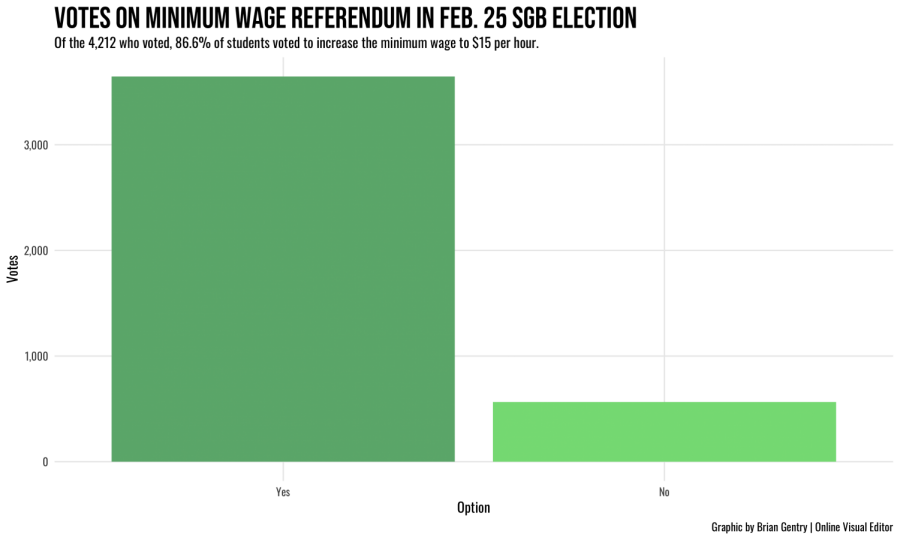 After the votes came in, current SGB President Zechariah Brown said he felt just as overwhelmed as the candidates themselves. According to Brown, the future of SGB is “in great hands,” especially since current board members Macadangdang and Humphrey will be key members in next year’s board.

“I think that having people who are currently on the board who will be on next year’s board is really going to help us in ensuring that not only does SGB progress, but we don’t lose track of a lot of the amazing work we started this year,” Brown said.

Abraham, joined by her fellow slate member Fleisher, said she is very hopeful that their campaign’s missions will come to fruition in the next academic year, as their slate secured the presidential spot with Macadangdang’s win.

“We really believe in the ideas that we ran on and we’re excited to put them into action,” Fleisher said.

According to Abraham, now that all of the campaigning is over, she is just happy to celebrate.

Rainbow Alliance
$22,500
$20,000
Rainbow Alliance requested for honorarium and miscellaneous costs to bring Gigi Gorgeous to campus on March 25. The committee made cuts due to a lack of documentation for travel costs.

Some of God’s Children Gospel Choir
$5,565
$5,565
SOGC requested for honorarium, services and miscellaneous costs for its annual Spring Concert on April 11. The committee recommended to approve in full.