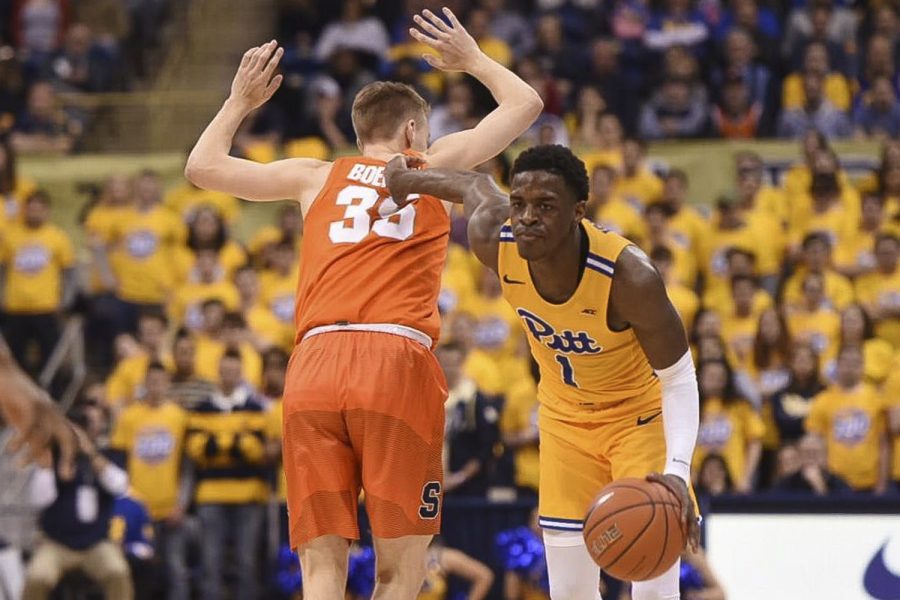 Sophomore guard Xavier Johnson (1) at last year’s matchup against Syracuse at the Pete.

When Pitt men’s basketball lost at Syracuse in the first game of this year’s home-and-home series in January, the Panthers seemed to simply run out of time. After struggling to crack the Orange’s infamous 2-3 zone for the majority of the afternoon, Pitt finally started to find answers about midway through the second half. Down by as many as 20 points, Pitt began to penetrate the zone, getting open looks and opportunities at the rim.

Despite slowly clawing back to eventually cut the deficit to three with under a minute left, the effort came too little too late. Syracuse hit its end-of-game free throws to sink the Panthers 69-61. For Pitt to break its losing streak on Wednesday’s senior night rematch with the Orange, the Panthers must hope the team who led that late-game comeback shows up for the entire 40 minutes.

Although the result was disappointing, Pitt and head coach Jeff Capel found their silver lining in the team’s improvement. Pitt, fresh off winning back-to-back conference games for the first time since February 2017, showed resilience on the road against one of the ACC’s hottest teams.

“I thought we had a better rhythm of how to attack the zone in the second half,” Capel said after the loss. “We weren’t on our heels. I thought we did a better job, but we dug ourselves a little too deep of a hole to get out of.”

Ahead of the two teams meeting again Wednesday, the stakes have changed drastically. Both teams have completely dropped out of the NCAA tournament discussion, and Pitt (15-13, 6-11 ACC) currently sits on its worst losing streak of the season. Syracuse (15-12, 8-8 ACC), which improved to 6-3 in the conference after the Pitt win, has lost five of its last seven games since then.

What caused the Orange’s slump? Defense. While their 2-3 zone may have gained notoriety for the fear it stoked in opponents during head coach Jim Boeheim’s rise in the program, it certainly doesn’t scare anybody now.

Syracuse’s defense has been picked apart night after night. Since the Pitt game, they have given up an average of 80.3 points per game, including blowout losses to Duke and Louisville where they allowed 90+ points. This season, the Orange have an adjusted defensive efficiency rating of 98.7, 114th in the nation. A recent in-depth look by The Athletic attributed these struggles to four main factors — inexperience, size, late-season fatigue and lackluster help defense.

On the offensive end, however, Syracuse has played with better execution. The Orange have several lethal threats that can get hot quick. Junior forward Elijah Hughes leads the ACC in scoring with 18.6 points per game and sophomore Buddy Boeheim — son of the legendary Syracuse head coach — leads the ACC with 88 3-pointers made this year, 18 more than his closest competition.

In order to give its seniors a win in their last game at the Petersen Events Center, Pitt will need to contain Boeheim. The volatile shooter terrorized the Panthers in an 18-point first half of the first meeting, helping the Orange build that insurmountable lead. Pitt adjusted in the second half, assigning the longer, stronger Au’Diese Toney to defend him, and they held him to only three points the rest of the way.

Shutting down Hughes a second time will be no easy task. Despite Syracuse’s struggles since it played Pitt, Hughes has succeeded in carrying most of the weight of the offense. Five of his 12 20+ point performances this year have come during these last seven games. He also has been asked to do this with very little rest. In 17 of the Orange’s 27 contests this season, Hughes has played the entire game from start to finish.

Although they fell just short in their first matchup with the Orange, the Panthers will end their four-game skid with a senior night win on Wednesday. The difference is a home-court advantage.

With the Oakland Zoo behind them and an improved performance against Syracuse’s infamous zone defense, the Panthers will upset the Orange.