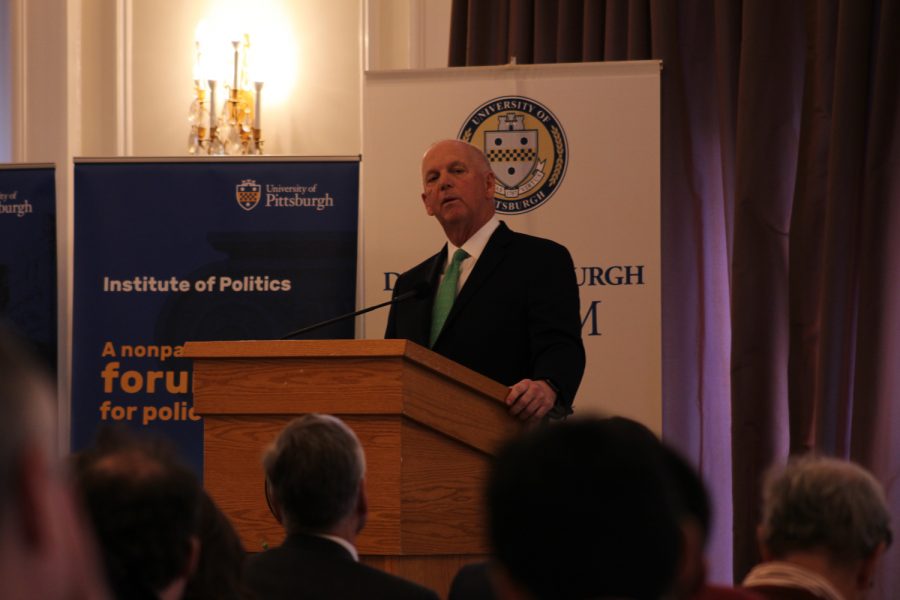 David Hickton, a former United States attorney for the Western District of Pennsylvania, speaks about the impact social media has on political discourse at Tuesday afternoon’s “Can Democracy Survive the Internet?” event in the University Club.

By Katie Sottile, For The Pitt News

By scrolling through social media, David Hickton says you might be sacrificing your civil liberties.

Hickton, a former United States attorney for the Western District of Pennsylvania and current director of Pitt’s Institute for Cyber Law, Policy, and Security, gave a lecture called “Can Democracy Survive the Internet?” at the University Club to 205 people on Tuesday afternoon regarding the state of American democracy in the digital age. The lecture was part of the Dick Thornburgh Forum for Law and and Public Policy’s Discussions on Governance series.

Mark Nordenberg, former Pitt chancellor and current Dick Thornburgh Forum Leadership Director, began the lecture by introducing Hickton, but not without poking a bit of fun.

“I have known David Hickton since he was a law student,” Nordenberg said. “He earned his undergraduate degree at Penn State, and I sometimes kid him by saying he had to come to Pitt to overcome that disadvantaged background.”

Hickton took to the podium to discuss the potential mortality of modern democracy in response to the ever-expanding nature of the internet. He referenced the motivation of his lecture as having come from “Democracy Unchained” — a book to which he recently contributed a chapter.

“I have become progressively more alarmed that this new communications medium with no rules is a threat to our democratic norms, laws and values,” Hickton said. “The internet is free and open, and as a result, I believe we here in America are particularly vulnerable and susceptible to our adversaries.”

Former President Barack Obama appointed Hickton as a U.S. attorney in 2010, a position he served in until 2016. During his tenure, he witnessed the fragility of online infrastructure firsthand, when the heads of U.S. Steel and United Steelworkers of America told him that Chinese hackers had infiltrated their networks.

“Critical to China’s assault was the theft of intellectual property, which was not only taking our ideas, but robbing companies of the incentive to conduct further research and development,” Hickton said.

But according to Hickton, China is not the only technological threat to democracy. He said some threats are domestic — including one that currently resides in the Oval Office. President Donald Trump utilized social media in an attempt to challenge the legitimacy of former presidents and challenge America’s political discourse.

“Consider the campaign and presidency of Donald Trump,” Hickton said. “It would have been inconceivable, before the digital age, that a real estate developer and reality TV show host could claim the highest office in the land.”

Hickton cited Trump’s unconventional use of Twitter as a method of rallying his political base and infuriating his opponents. He said Trump uses the internet as a way to obscure the truth and bypass traditional media.

Hickton said an unregulated internet can also serve as ground zero for social change. The Black Lives Matter, #MeToo and March For Our Lives movements all gained significant support through their rapid online spread. In contrast, Hickton said authoritarian movements can also be bred on the internet.

“Resurgent right wing movements have mobilized online, aided by an ease by which hate and conspiracy can spread over social platforms,” Hickton said. “We must consider whether the cooccurrence of our dependence upon the internet and the rise of authoritarianism is related or coincidental.”

Hickton said policy change is at the forefront of protecting our democracy from potential technological damage.

Ilana Udler, a junior majoring in computer science, learned about the lecture through her Applied Legal Data Analytics and AI class. She said she generally has an optimistic outlook on technology’s impact on society, but finds herself at a loss when grappling with the freedom associated with an unregulated internet.

“In terms of what policies can be put in place to make democracy more secure, with what technologies exist, it’s almost impossible for me to think about right now,” Udler said. “Even if the Supreme Court is trying, the tools that we would need to enforce that don’t exist yet.”

Udler thinks it is crucial to look beyond policy and instead focus on the fundamental basis of computer science.

“If you have your hands on a basketball, you can go to a court and play basketball,” Udler said. “It’s nice that computer science is like that, but at the end of the day it’s very dangerous. You can’t start thinking about what policies could be put in place without thinking how you can enforce them.”

Though hopeful, Hickton asserts the onus is on United States citizens to defend our liberties.

“We have to do the hard work to protect our norms and preserve the rule of law,” Hickton said. “Our American democracy and our freedoms are in the breach.”

Editor’s note: This article has been updated to clarify the correct number of people present. The Pitt News regrets this error.