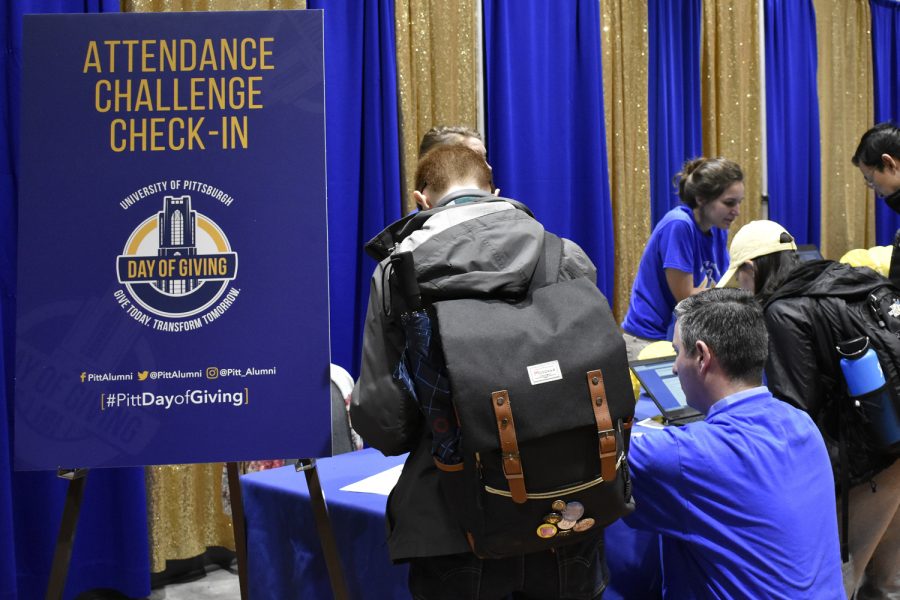 More than 7,000 donors contributed to the fourth annual Pitt Day of Giving.

The fourth annual Pitt Day of Giving — a 24-hour fundraising initiative — took place on Tuesday. This year’s PDoG raised $1,651,212 — which is down about 61% from last year’s event.

“The @PittTweet community was out in full force and we couldn’t be more happy,” Pitt’s Alumni Association tweeted at midnight on Wednesday. “Thank you to everyone who participated, it was an amazing day!”

Groups and individuals in the Pitt community spent the day encouraging alumni and other supporters to donate to their initiatives via social media. Anyone could donate to organizations and funds in six main competition categories — Schools and Colleges, Regional Campuses, Places, Experiences & More, Athletics, Student Organizations and Areas of Greatest Priority — throughout the day of the event.

Schools and Colleges consists of schools within the University such as Dietrich School of Arts and Sciences and Pitt Law. Pitt Bradford, Johnstown and Greensburg make up the Regional Campus category, whereas last year they participated in the Schools and Colleges category. Places, Experiences & More includes various organizations affiliated with the University, such as Student Affairs and the Falk Laboratory School. The Athletics category included funds such as the University Band Fund and the Pitt Cheer, Dance & Mascot Championship Fund. Areas of Greatest Priority category includes the General Scholarship Fund, the Pitt Fund and Panthers Forward. Student Organizations consists of various student groups across campus, including Club Cross Country and Best Buddies.

Pitt hosted an event in the WPU from 11 a.m. to 3 p.m. on Tuesday where students, faculty and alumni checked in under their group, college or area to eat food and socialize, as well as win additional attendance challenges, in which the area that got the most individual attendees could earn extra money. Prominent Pitt officials such as Chancellor Patrick Gallagher attended the event as well.

“Thank you to the Pitt community for showing up on this #PittDayofGiving!” Gallagher tweeted early Tuesday evening.

Liz Hassett, the student director of the Blue and Gold Society, checked people in at the event and said everyone there seemed really excited. This is the second time Pitt has held an in-person event for PDoG.

”We’re heavily promoting the event. We’re trying to make a bigger deal out of it this year. We have almost 1,200 people checked in right now [at 2:10 p.m.],” Hassett said.

In addition to donations, organizations had the opportunity to earn extra funds through various challenges. Some challenges were related to Pitt and its history — like the 1787 Founders’ Day Challenge, in which the 1787th virtual donor receives $500 to donate to the area of their choice — while others rewarded the most gift conversions via social media.

The Schools and Colleges category and Regional Campuses category participants had two opportunities to earn bonuses — one from the Participation challenge and one from the Raise the Bar challenge. In the Participation challenge, the top three organizations with the most unique donors receive extra funds. In the Raise the Bar challenge, organizations are rewarded for surpassing their total number of PDoG 2019 unique donors with the greatest percent improvement. 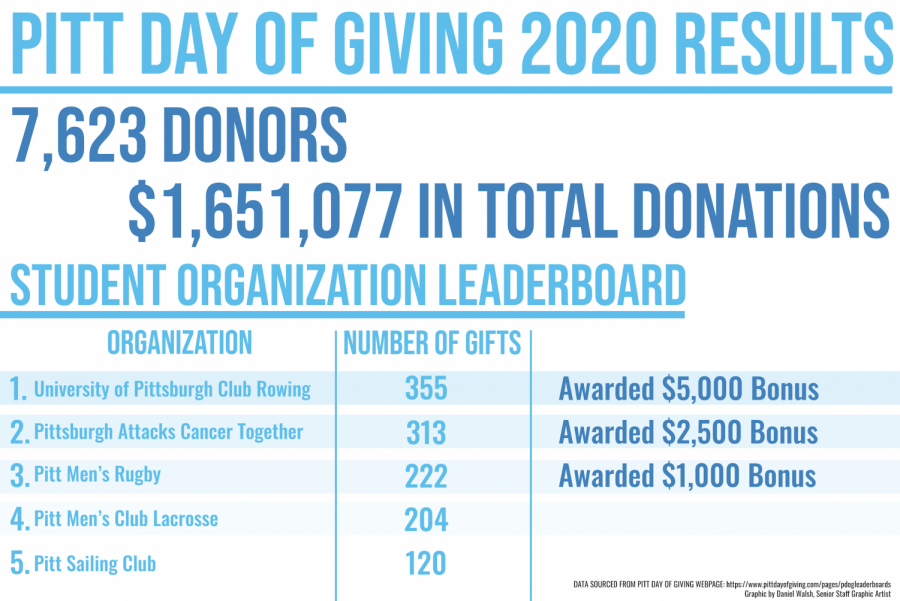 Dietrich School of Arts and Sciences came in first place in the Schools and Colleges Participation challenge with 564 unique donors, receiving a $25,000 bonus. DSAS also won the Raise the Bar bracket with a 266.04% improvement from last year and received a $25,000 bonus.

The General Scholarship Fund had the most donors in the Areas of Greatest Priority with 131 donors.

Pittsburgh Attacking Cancer Together took first place with 416 gifts, winning a $5,000 bonus. Shannon Madden, a junior neuroscience major and director of PACT, elaborated on the strategy the club used in order to gain donations.

“We tried to use as many alumni connections as possible, because they’ve been through this, so I feel as though they’re able to understand how the competition goes. We also have a lot of family connections that actively support the group because of the nature of our cause,” Madden said in an email.

Despite this being PACT’s first PDoG, they said they had a lot of participation.

“I’m very happy with how it has gone! This is our first PDoG so it’s exciting to see the members get involved,” Madden said.

Noah Puleo, a senior biology major, is a member of PACT and came to support them at the PDoG event in the WPU Tuesday.

Pitt Men’s Rugby came in third place with 234 donations, winning a $1,000 bonus. Dylan Direnna, a senior accounting and economics major and one of the team’s captains, said in an email that the team will use their funding for the typical expenses like travel, tournament fees and uniforms that fit with the University’s new color scheme.

“We didn’t have a specific strategy, mainly just spread as much awareness as possible to our family, friends and network through social media and other forms of communication,” Direnna said.

Brandon Biju, another member of Pitt Men’s Rugby, said Pitt Day of Giving helps to place Pitt’s name out into the community.

“I feel like it’s good for alumni outreach, furthering the community and putting Pitt out there,” Biju said.

Editor’s note: The Pitt News participated in Pitt Day of Giving this year in the Student Organizations category.