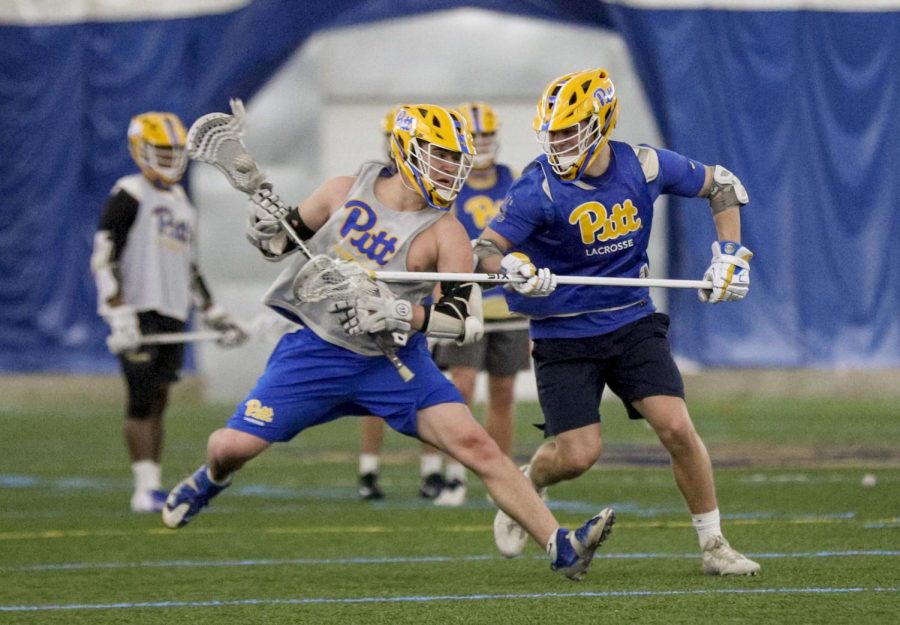 Pitt club men’s lacrosse played a 14-game regular season in 2019, weathering a plethora of tough opponents to finish 7-7 and qualify for the Continental Lacrosse Conference playoffs.

After finishing 7-7 and suffering a first-round playoff defeat in 2019, Pitt men’s club lacrosse is hungry for more this season.

So hungry, in fact, that the team recently ate a whopping 990 chicken wings over the course of an hour.

28 of the team’s 31 members — an average of about 35 wings per person — helped contribute to the feat of jaw-dropping determination and sheer will. The wings came courtesy of William Penn Tavern in Shadyside, which head coach Richard Rattner has owned for nearly 20 years.

“That was a grind,” first-year midfielder Phil Tarling said. “But it’s a great example of how strong our bond is off the field. It’s tough to imagine another group of guys who would do something like that. The fact that our program emphasizes the importance of brotherhood is great and our closeness definitely carries over onto the field.”

So far this season, the team’s chemistry has certainly carried over to the field. The Panthers are 2-0 and sitting atop the West division of the Continental Lacrosse Conference after blowout victories over division foe Central Michigan, 20-2, and George Washington, 16-1.

“I think we have a lot of potential,” senior captain Brian McCaffrey said. “The guys are bought in and have a lot of talent. I think we can definitely compete for the conference.”

The players credit Rattner, in his first year at the helm after serving as a defensive assistant for the previous seven years, for promoting a culture of tenacity on the field and camaraderie off it. It helps that he has his own restaurant just 10 minutes from campus, where players often get together on the weekends and holidays.

While McCaffrey says that Rattner can be old-school and tough, never afraid to let a player know if they’re “doggin’ it,” the connections that the coach builds with his team off the field and his personability make it easy for players to want to work hard for him.

“If you’re gonna feed me ham and club soda on Easter,” McCaffrey said, “then I have no problem with you calling me soft if I deserve it.”

Playing club sports can provide athletes with the perfect balance between athletics and the more traditional lifestyle of a college student. Steadfast commitment is necessary, but the requirements are not so extreme that the athletes’ lives revolve around their sport. For Pitt men’s lacrosse, it’s all about finding that happy medium.

“[Our program] is a great balance of being competitive and serious about lacrosse but also not letting it take total control of everything that we do,” McCaffery said. “It’s awesome that I can wear a big-name school like Pitt across my chest and be serious about representing [the University] while also not having some of the unattractive things of being a student athlete always attached.”

Don’t get it twisted — the Panthers take their craft seriously. Multi-seasonal practices, winter workout regiments and thousands of miles of travel (a weekend bus trip to Minnesota, for example) make playing Pitt men’s lacrosse as meaningful of an investment as most.

At the same time, Pitt practices only three times per week, allowing athletes to have a more standard undergraduate experience and not be burdened by the same levels of pressure and commitment as their varsity counterparts.

Pitt played a 14-game regular season in 2019, weathering a tough slate of opponents to finish .500 and qualify for the CLC playoffs. A playoff appearance was a step in the right direction, but the Panthers have loftier expectations for the 2020 season.

In order to vie for and ultimately win its desired conference championship, which would lead to an appearance in the Men’s Collegiate Lacrosse Association national tournament, Pitt will have to rely heavily on a myriad of underclassmen. With only five upperclassmen on the roster, 84% of the team are either first- or second-year players. Team veterans see this as evidence that Pitt’s future is bright, while maintaining the belief that the team has the tools to compete at a high level in 2020.

“A lot of sophomores are really coming into their own and establishing identities for themselves, and we have a solid freshman class,” McVey said.

McVey singled out fellow attackmen Tarling and Max Hoadley as particular bright spots in the team’s first-year class. With so much youth and inexperience on this year’s squad, team leadership knew how important the fall would be for setting the right tone.

Pitt played only one fall scrimmage, devoting time to developing chemistry and rhythm rather than playing in out-of-season exhibitions. This process of team building often consisted of playing racquetball in The Pete or sharing post-practice meals in Market Central — activities Tarling said helped incorporated the newcomers into the fold.

“I’ve had a great time getting to know my teammates,” he said. “In the beginning of the year, I literally didn’t know anyone. The fall was a lot of getting to know everyone and I think that contributed to us being a solid, cohesive unit.”

McVey added that in a sport like lacrosse, team cohesion and willpower are often as important as talent.

“If we’re not gonna be the better team on the field skill-wise, then we’re gonna make up for that with hustle, grit and a desire to win,” he said. “When you step out on the field, even if there’s a talent gap, the team that really wants to win is probably going to win.”

All of Pitt’s defining characteristics will be put to the test over the first couple weeks of April, when the team hosts conference powerhouses Michigan State, New Hampshire and Western Michigan at the Pitt Sports Dome. Those matchups, along with rivalry games at Temple and West Virginia, will serve as indicators for how well Pitt matches up against substantial competition.