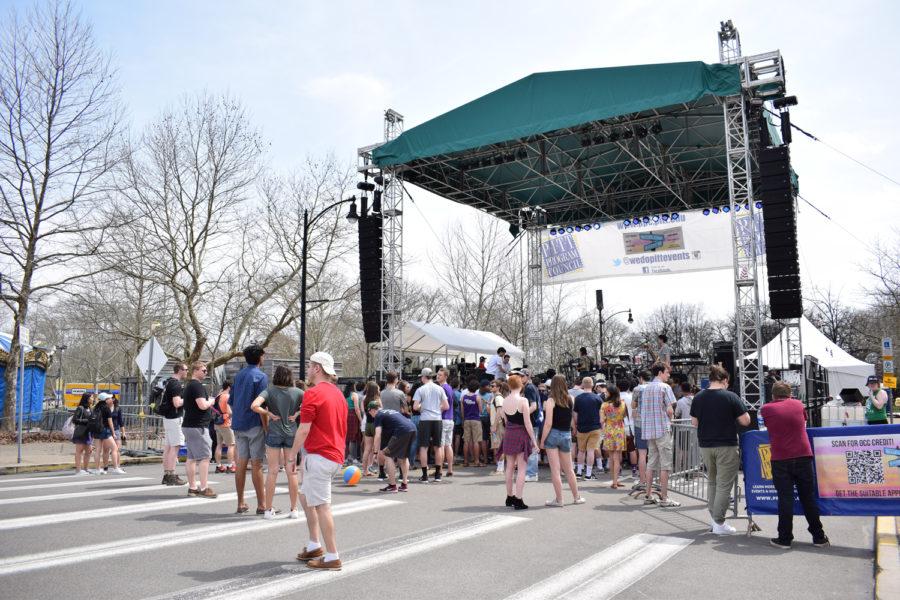 Students gather in front of the stage at the 2018 Bigelow Bash.

PPC’s special events coordinator Eva Lin Feindt said she was interested in booking a rap artist for Bigelow Bash after booking indie-pop band Lovelytheband for the past Fall Fest concert. Lin Feindt also said she had a personal goal of booking a female artist, which led her and the other members of PPC to choose Rico Nasty and Young M.A as headliners.

“We ultimately decided that it would be a great lineup for rap and hip-hop enthusiasts, as well as a high energy and fun show for an end of school year concert,” she said via email.

Pitt Program Council also announced its annual Pitt Factor talent competition, where students have the opportunity to compete for a chance to open for Young M.A and Rico Nasty, will take place March 24. Interested students are able to sign up for the event in room M-30 of the William Pitt Union.

According to Lin Feindt, The Pitt Factor competition is a way for PPC to help promote student acts, from music groups to dance crews.

“We have been doing this event for about 10 years now, and its main purpose is to help showcase student talent, as well as provide the winner with a unique experience on stage at a festival,” she said.

Both headlining performers this year are female rap artists. Rico Nasty received critical acclaim after releasing her 2018 mixtape “Nasty,” and collaborating with fellow artist Doja Cat on the 2019 hit “Tia Tamera.” Following the release of her 2016 single “Ooouuu,” Young M.A was nominated for the MTV Music Awards Artist of the Year award and opened for rapper 21 Savage on his 2017 “Numb the Pain” tour.

Editor’s note: This story has been updated to include comment from Pitt Program Council special events coordinator Eva Lin Feindt