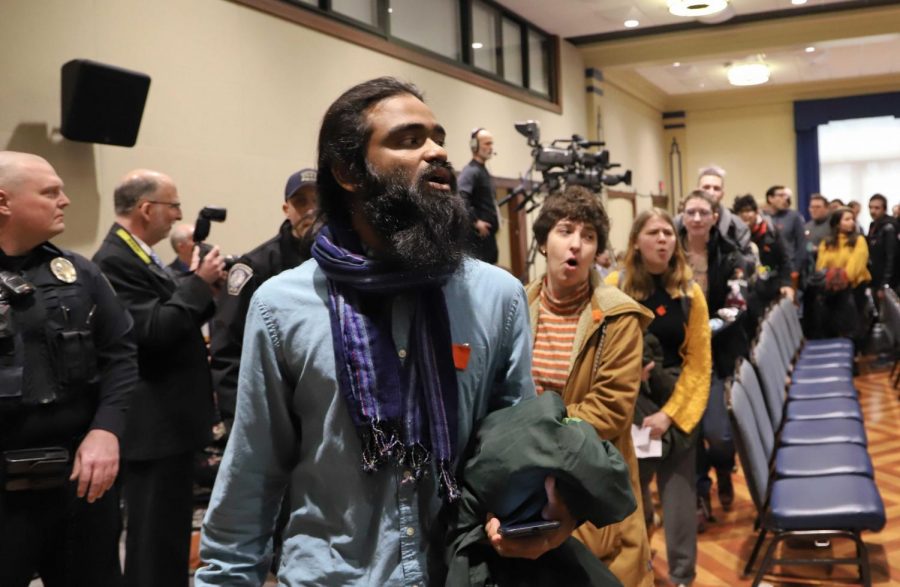 Around 100 students protested in favor of fossil fuel divestment at Friday morning's Board of Trustees meeting.

After about 100 students protested at the Board of Trustees meeting on Friday morning, the Board unanimously approved measures to create a formal socially responsible investing process for its $4.3 billion endowment and to support carbon neutrality by 2037.

Students sang a modified version of “We shall not be moved,” by Pete Seeger and The Song Swappers, with words modified to repeat the four demands of the Fossil Free Pitt Coalition advocacy group — demanding the Board divest from fossil fuels, Board trustees with fossil fuel ties abstain from the vote, a public comment period at Board meetings and a student voice in investment decisions.

The new SRI process allows for Chancellor Patrick Gallagher to formally recognize requests for investment exclusions from the University community, such as the long-standing student request for fossil fuel divestment. Gallagher could then advance a request by either bringing it directly to the Board or creating an ad hoc advisory committee to analyze the possible exclusion. A findings report would then be presented to the Board for possible action.

The votes follow years of student advocacy by FFPC pushing for the University to rid its endowment of any investments in the fossil fuel industry. The coalition disrupted the Board’s last meeting in September held at the Johnstown branch campus and held a sit-in this week in the Cathedral of Learning. FFPC demanded the Board hold a vote at the Friday meeting to divest from fossil fuels and set a deadline of April for the process to be completed — stating that unclear “appropriate action” would be taken if its demands aren’t met.

Chancellor Patrick Gallagher originally charged Chief Financial Officer Hari Sastry with writing the measures last August after the chancellor’s Socially Responsible Investments Committee released a report last July examining several aspects of socially responsible investing. Gallagher said at the Friday meeting that it is important to evaluate the harm caused by divesting from a particular asset against the danger of not receiving returns from those assets.

“It’s a harm against harm criteria that the Board must face,” Gallagher said. “It’s a very high bar, but it’s not an impossible one.”

Gallagher added that the Board’s investment committee will review revisions to the endowment’s environmental, social and governance criteria at its next meeting in March, which would incorporate “positive” SRI screening, or prohibiting future investments in defined categories.

“I’m looking forward to implementing this policy with the Board once it is approved,” Gallagher said.

FFPC organizer Prem Rajgopal said the new process of creating an ad hoc committee to study a particular investment exclusion is a “stalling tactic” and such a committee would not uncover any new information about divestment.

“We think that there is enough information out there in public knowledge,” Rajgopal said. “We think they need to act on it immediately.”

Board chairperson Eva Tansky Blum said in a statement that she would “immediately consult” with Board committee chairs on next steps on the new SRI process.

The Board also approved a resolution encouraging the University administration to take actions necessary to achieve carbon neutrality by 2037. The resolution authorizes the creation of a Carbon Council to design and manage a carbon neutrality implementation plan, as well as the signing of the Second Nature Climate Leadership Statement on Carbon Commitment.

“We have a lot of goals that are tagged to 50% reduction by 2030,” Sharrard said. “Looking out to 2037, we have the strategies, but we need a cross-representation sample from the University to really make sure that that will be deployed widely.”