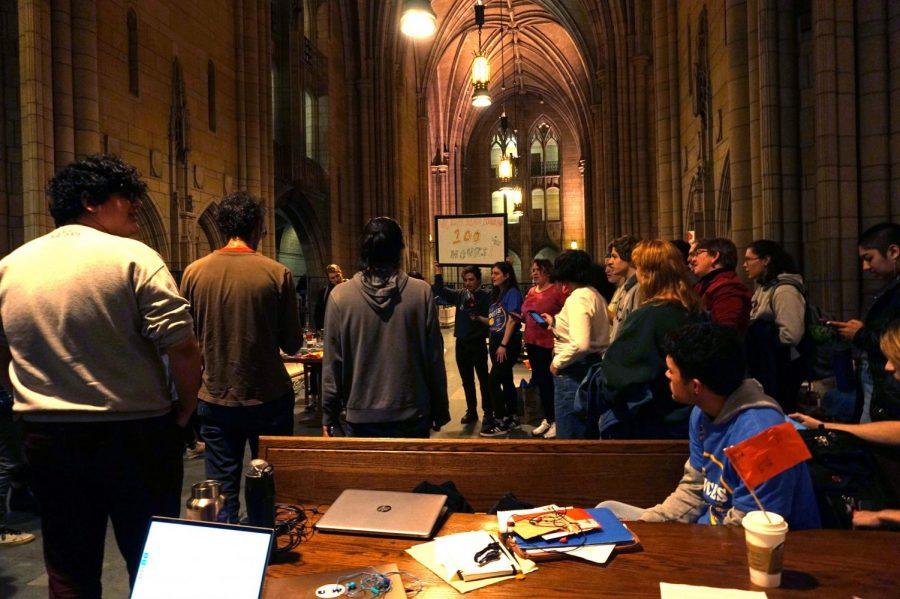 Protesters sing the popular folk song “We Shall Not Be Moved” on Tuesday in the Cathedral to commemorate the 100th hour of the Fossil Free Pitt Coalition’s sit-in with lyrics changed to be specific to the sit-in.

When protestors from the Fossil Free Pitt Coalition sang “we shall not be moved” at Friday morning’s Board of Trustees meeting, they meant it — literally.

FFPC has committed to continuing its week-long sit-in in the Cathedral of Learning commons room indefinitely, organizer Prem Rajgopal said. The occupation began last Friday at noon as a lead up to the Friday Board meeting, where organizers had pushed the Board to divest the University’s $4.3 billion endowment from fossil fuels at the Friday meeting, among other related demands. FFPC has previously said that unclear “appropriate action” would be taken if its demands were not met, and has since explicitly laid out what happens now that their demands have not been met.

“We have a lot of potential plans,” Rajgopal said. “We’re not going to just sit down and be quiet and wait until their June meeting to hope that things happen. We are definitely going to keep the pressure up and make sure they understand we’re still here.”

The Board voted Friday in favor of a formal socially responsible investing process, along with other sustainability-related matters, which grants Chancellor Patrick Gallagher two mechanisms to handle proposed investment exclusions, such as the long-standing student request for fossil fuel divestment. Gallagher, in consultation with Board chairperson Eva Tansky Blum, could either bring the proposed exclusion directly to the Board or create an ad hoc advisory committee to analyze the possible exclusion.

According to Rajgopal, these guidelines include not storing personal items inside small alcove spaces in the walls, not covering tables with orange paper, removing signs from chairs and not having the appearance of “reserving” spaces.

Organizers alleged that the guidelines described to them were “new” and not previously disclosed, but University spokesperson Kevin Zwick said the guidelines were not new, and Pitt was reminding students that the Cathedral space is to be “open to all students for congregating and studying.”