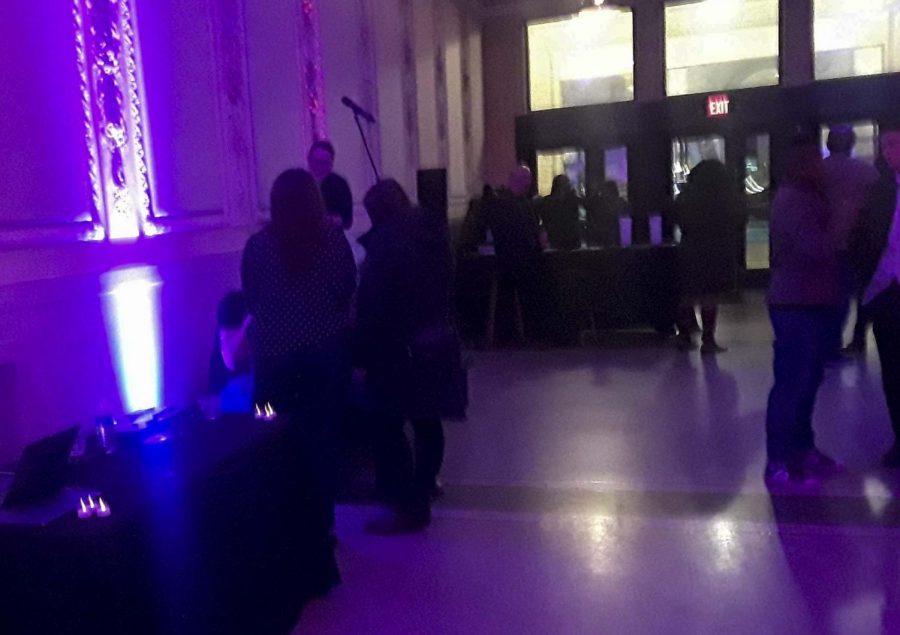 After the performance, audience members speak with poet Tongo Eisen-Martin.

Snippets of conversation that rose above the heavy bass of the music started to die down as Tongo Eisen-Martin took the stage at the Kelly Strayhorn Theater to recite the opening lines of his first poem — “You can tell by my tires that not everybody who’s driven with me is still alive.”

The Center for African American Poetics and Poetry invited Eisen-Martin to read his work as part of its “Black to the Future” festival, a series of lectures, readings and performances that took place from Feb. 26 to Feb. 29 on Pitt’s campus and at several venues throughout the City. Fellow poet Simone White hosted the event and accompanied Eisen-Martin’s spoken poetry as a DJ.

After those opening lines, Eisen-Martin, a native of San Francisco and author of “someone’s dead already” and “Heaven is All Goodbyes,” proceeded to recite some of his poems one after another without clear breaks between each piece. The performance was fast-paced and moved quickly between different settings, transitioning between modern scenes involving police brutality and scenes of African slaves at sea.

Eisen-Martin said his poetry was a chance for him to communicate with others about his experiences outside of the normal social framework.

“My poetry is more than a result of an inspiration. It’s kind of like taking advantage of the opportunity to see what my mind can really do,” Eisen-Martin said. “See, usually when we talk, there’s some kind of social reproduction at stake. So, poetry’s the opportunity to take that mandate or that paradigm out of communication.”

“I never heard anything like that in my life. It was really amazing, like stream of consciousness and very impactful,” Gantt said. “His ability to express it so rhythmically and quickly, it was very musical.”

Dawn Lundy Martin, the director of CAAPP and a professor in the English department at Pitt, said she liked how Eisen-Martin’s piece blended together different time periods and drew from his own personal experience.

“I think that what I love about Tongo’s work is that it’s both from the past and also from the future,” Martin said. “His performance has this unexpected quality where you don’t know if it’s all memory or also part improvisation.”

The music that played throughout the evening and accompanied Eisen-Martin was complemented by White as DJ. White is the author of “Dear Angel of Death” and “House of Envy of All the World” and received the 2017 Whiting Award in Poetry and Cave Canem Foundation fellowships.

While she did not recite any of her own work, White put together a demonstration of what she calls “(t)rap music.” White said trap music has slight differences from rap, but is easy to recognize due to key characteristics, such as extra low bass and fast high-hat drum sounds.

“Trap music is probably the most — well it’s certainly right now the most popular iteration of rap music, but really it’s just rap music,” she said. “It has its own sonic profile, so there’s definitely recognizable sonic patterns in the music that anybody would recognize.”

White said she tried to choose songs for her performance that gave a good sample of the sound of trap music from various points in the genre’s history.

“I was trying to make a mix that, first of all, gave a good representative sample of what trap music is and has been for the last 10 years or so — it’s development.”

White said she has recently been working on poetry dealing with what trap music means in terms of contemporary society as a whole and the personal importance she finds in the music. She said she uses the influence of the music to write poetry about her own life.

“If this is the most popular music in the world, which it is right now, then what does that say about the world that we live in?” White said. “My poems that are engaging in trap music right now mostly actually just talk about my life and the ways in which this music helps me to understand it.”

According to Eisen-Martin, who also works as a human rights activist and educator, there’s no topic too big or too small for a poet to write about. He said he tries to take his experiences and turn them into art — no matter how menial the experience may seem.

“The galaxy is mine to take a shot at and digest it as best I can,” Eisen-Martin said. “All the way down to this conversation that we are having right now.”