March is for Martisor 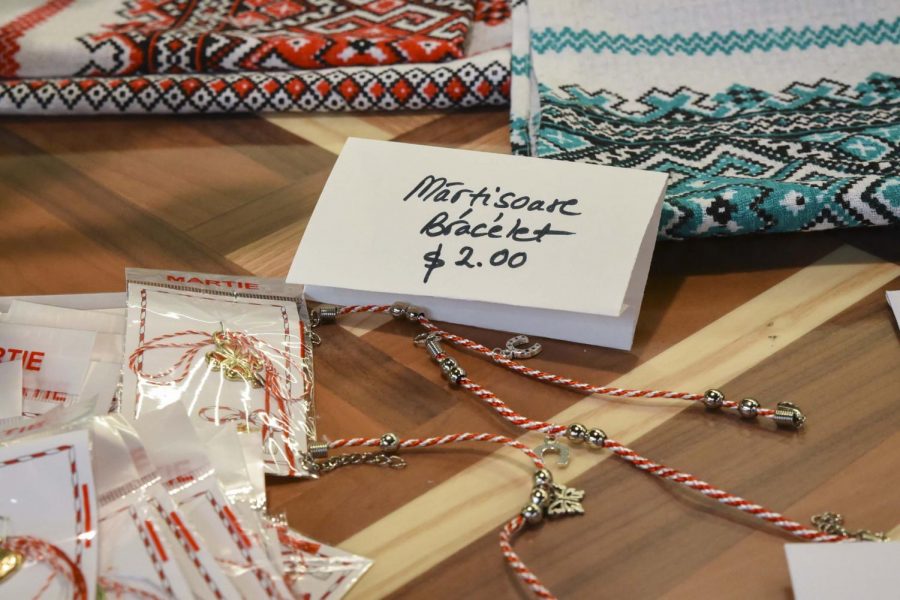 By Ananya Pathapadu, For The Pitt News

In the Global Hub of Posvar Hall Saturday afternoon, a grandmother picked out a red and white string tassel, decorated with a heart pendant, as a gift for her granddaughter. The girl received it with a smile and dashed off to show the pendant to friends.

The red and white string tassels, called Martisor, are gifted to loved ones on March 1 as part of a month-long Romanian celebration — also called Martisor.

The Romanian Nationality Room Committee hosted the University of Pittsburgh’s observance of the Martisor tradition this past weekend. At the event, guests had the opportunity to make their own Martisors in the shapes of either a boy or girl, buy traditional Martisors and taste baked Romanian delicacies such as wafers, cheese puff pastries and vanilla horns.

According to Marilena Legersky, a member of the Romanian Nationality Room Committee, the tassel signifies luck and fertility for the person who wears it. Legersky said the practice of making and selling Martisor at fairs begins about two weeks before the first of the month.

“You wear it for the entire month and at the end of the month you take the string and you put it in the tree,” Legersky said, explaining that this symbolizes passing the fertility on to the land.
Diana Gorun, a member of the committee who baked the dishes for the event, said the wafers have layers of homemade caramel filled with walnut. The cheese puff pastry is a savory item filled with a mixture of cheeses, including soft kashkaval, which is like mozzarella cheese. The vanilla horns are also puff pastries, but are a sweet dessert filled with homemade vanilla cream.

Gorun, originally from Transylvania, said she chose to make the wafers because it is a common sweet made in Transylvania, adding that the other goods are common treats eaten during Martisor. The food is made at St. Andrew Romanian Orthodox Church of Pittsburgh in McKees Rocks, which also hosts a yearly Romanian food festival that Gorun said has been drawing increasingly dense crowds each year.

“In September, every year for the past 20 years, we have a Romanian food festival. More and more people are coming and [the Romanian treats are] a part of the menu there too.”

According to a slideshow running at the event, the origin of Martisor comes from the Romanian word for March, Martie, while the tradition involving the red and white string comes from either the ancient Dacians or Romans more than 8,000 years ago. The red string signifies summer and the white string signifies winter. March 1, or Martisor, is the Roman New Year, which traditionally was celebrated with a festival to welcome the spring and harvest.

Originally, the Martisor was a talisman of sorts, as wearing or hanging it was meant to protect against evil spirit and bring good luck and weather. Nowadays, the Martisor is gifted by individuals to their female friends and family members on March 1 as a token of friendship or admiration.

“People make their own crafts and they sell them, alongside little tulips. So on the first of March, everyone is ready to get their pins and to wear them,” Legersky said. “This is the most important thing, the Martisor, the jewelry.”

Martisor is also celebrated in countries that border Romania, such as the Republic of Moldova. Aksana Cordova, who attended the event on Saturday, lived in Moldova when she was in the Peace Corps. Cordova said in Moldova, starting a week before the celebrations on March 1, vendors sell a variety of Martisors — which can be handmade, crocheted or in the form of bracelets and brooches. Those who celebrate the tradition in Moldova buy Martisors for their loved ones or people they admire and offer it to them on March 1.

“My host mom would wake me up and she would present me with her Martisor for me, and pin it on me. And I would give her one as well. And then I would make my way to school, and all my students, at least the ones who liked me, would give me a Martisor and I would pin them on. So by the end of the day I had like 20 to 30,” Cordova said.

“Here, we don’t really celebrate it other than just trying to bring awareness to people. We just get our pins and we put them on our chest,” Legersky said.

Cordova said based on her time in Moldova, the celebration of Martisor embodies Romanian and Moldovan culture.

“They are very hospitable, very nice,” she said. “It was a whirlwind, I miss it.”