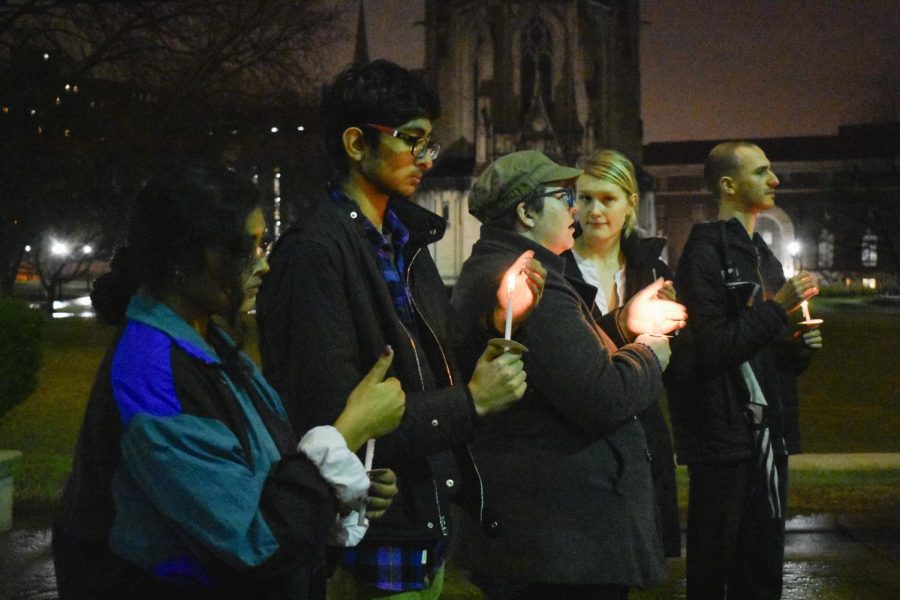 Pittsburgh Against Fascism in India held a candlelight vigil on Monday night to mourn the 50 victims of the late February riots in North East Delhi.

Candles flickered in the night as a crowd of people gathered in the Cathedral of Learning to mourn those lost in an act of mass violence halfway around the world.

Pittsburgh Against Fascism in India held a candlelight vigil on Monday night to honor the 50 victims of the late February riots in North East Delhi. About 30 people gathered on the Heinz Chapel side of the Cathedral of Learning with lit candles for a two-minute moment of silence, followed by a reflective walk around the Cathedral lawn.

Many have called the Delhi riots, which began the night of Feb. 23 and continued until the end of last week, a pogrom. About 50 people — mostly Muslims — were killed at the hands of Hindu nationalist mobs. An additional 200 people were injured, and many Muslim properties, mosques and homes were damanged or destroyed.

In the past few months, the Indian government has passed several acts excluding Muslims from citizenship status, resulting in widespread protests from India’s Muslim population and left-wing groups. The riots in Delhi follow an attack on Jawaharlal Nehru University in New Delhi in January, where more than 50 masked people, allegedly belonging to right-wing groups, attacked and injured students and teachers. In the days following the January attack, Pittsburgh Against Fascism in India held a teach-in on India’s current political state and staged a rally protesting the violent act.

This is the first event Pittsburgh Against Fascism in India has held since January’s protest. According to Sritama Chatterjee, a graduate student in the English department and an organizer of the event, the group had been looking to plan an event to directly benefit those they are in contact with who are on the ground protesting in India, but then changed course after the recent incident in Delhi.

“We want to make sure we are reacting appropriately to events as they happen, which is why we had the candlelight vigil to make sure we responded to [the Delhi pogrom],” Chatterjee said.

Sareena Fayaz, a junior neuroscience and political science double major, heard about the vigil through her friends and said she had not had much prior knowledge of India’s political climate until recently.

“I don’t know much about it, but I do want to learn more about it because I am a Muslim,” Fayaz said. “I know they are killing people and people are dying and about the rise of ethnonationalism and fascism globally. I’m really excited about the teach-ins and hope to get more involved.”

Attendees were invited to come inside the Cathedral after the conclusion of the vigil in order to discuss plans and ideas for the group moving forward. At this discussion, an event was tentatively planned for the end of April around the last day of classes.

Payal Patel, a junior neuroscience and film studies double major, found out about the vigil through the Facebook event and had also attended the teach-in and protest the group held in January. Patel decided to come to the vigil in order to support the victims of the pogrom and to make herself more aware of what is happening in India.

“I think as a south Asian American, not only is it important to my community, but it is a reflection of the rise of ethnonationalism overall, so it’s important to stay aware. Even if you don’t know much about the subject, it is important to participate in things and make yourself more aware,” Patel said.