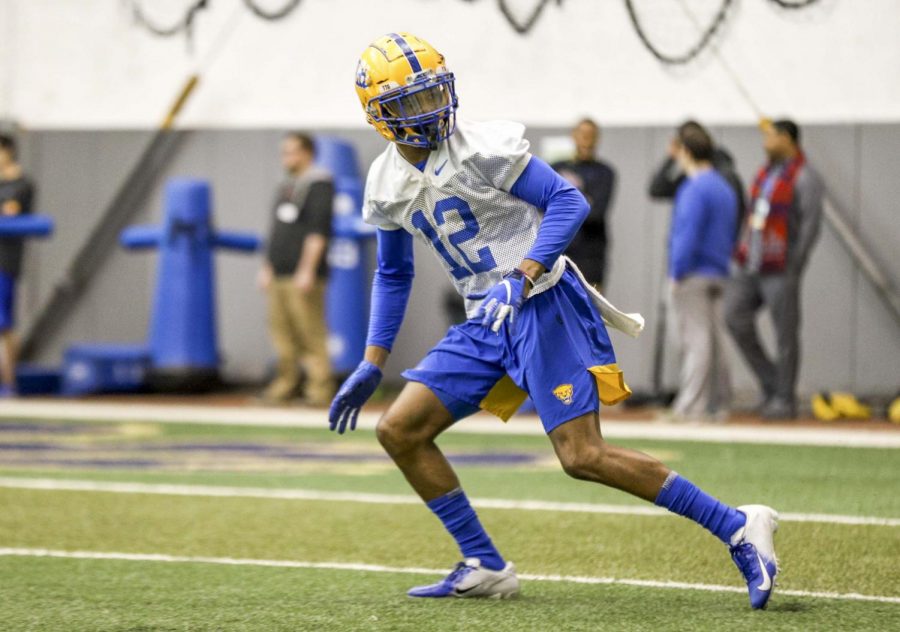 Pitt football began its long march to Sep. 5 — the team’s 2020 home opener against Miami (Ohio) — on Wednesday morning by kicking off spring camp.

The Panthers’ first official practice session of the 2020 season, held at their South Side practice facility, lasted from 9-11 a.m. Surely, no starting jobs were won or lost over the two hours of walk-throughs and workouts, though several team developments quickly became apparent.

Perhaps most notable of all was the revelation that redshirt senior Tre Tipton will return for a sixth season after earning a medical hardship waiver from the NCAA. After missing nine games as a newcomer in 2015 and sitting out the entire 2017 season with a torn ACL, Tipton established himself as Pitt’s No. 3 receiver through three games last season before suffering another season-ending ACL injury.

Tipton still isn’t healthy enough to run routes, though the expectation is that he’ll compete for a starting spot in the fall. Even while sidelined, the sixth-year veteran should have a positive impact on a youthful receiving corps that will be without last year’s top target, Maurice Ffrench.

To commemorate his sixth year of action for the Panthers, Tipton has changed his jersey from No. 5 to No. 6.

Monday also marked the return to action — albeit in a limited capacity — for redshirt senior defensive end Rashad Weaver, who tore his ACL in August training camp and missed all of last season. Weaver led Pitt with 6.5 sacks and 14 tackles for loss in 2018.

Though Weaver said he’s been able to cut and plant on the surgically repaired knee since Pitt’s bowl game in December, head coach Pat Narduzzi noted that the team will take a cautious approach in easing him back into action throughout the spring and summer.

“He’s not full-go right now. We’re gonna be smart with him,” he said. “We ain’t beating anybody … in March. We gotta be smart.”

Weaver personally shot down any notion that he won’t be 100% healthy when the regular season rolls around.

“The reason I wanted to come back was … just to build more with this team,” Hamlin said. “Something we’re preaching on the defensive side is ‘unfinished business.’ Because we set a standard last year but we know we can reach something way higher.”

Hamlin and Ford also cited their friendship off the field as a key reason for returning together. Both Pittsburgh natives, the two have been close since high school and are currently roommates. Hamlin said if Ford had gone pro, he likely would have followed suit, while Ford said the same of Hamlin.

While Twyman, Jones II, Ford and Hamlin certainly helped Pitt’s chances by choosing to return, it’s also possible that they improved their own future draft stock. Narduzzi lamented the fact that many players leave college to go pro before they’re ready, citing the example of former Pitt gadget player Quadree Henderson, who went undrafted in 2018 and has since bounced around NFL practice squads.

“There’s a lot of money left on the table. Every year, you’re gonna see how many guys … are leaving early and then getting drafted. That’s a mistake,” Narduzzi said. “The poor Quadree Hendersons, I blame myself when something like that happens and we can’t let that happen again.”

With so much talent returning on defense, optimism among the team is naturally high. Ford expressed the goal of winning an ACC Championship, or in the words of Weaver, winning “a real ring, a ring that matters.”

But for that to happen, Pitt will need to see significant improvement from an offense that ranked 114th out of 130 teams in points per game last season.

With Pickett returning for his third year as a starter and offensive coordinator Mark Whipple now in his second season, the Panthers believe the offensive continuity will pay off. They’ll hope to get a boost from the addition of several newcomers — first-year running back Israel Abanikanda, receivers Jordan Addison and Aydin Henningham and transfer tight end Lucas Krull — who made their presence known on the first day.

“Jordan Addison, the young guys did a really good job,” Pickett said. “They opened some eyes with how fast they are, Aydin and [Israel].”

Pickett also singled out Krull for praise, and by all accounts it looks like the 6-foot-6 Florida transfer will be Pitt’s No. 1 tight end this season.

“Just having a big target over the middle, a guy that can move, easy to see, blitz stuff like that, can hit him real quick over the middle,” Pickett said. “As we go throughout spring, more things will open up for him.”

Another one of Monday’s surprises was the sight of offensive lineman Gabe Houy walking the sidelines with a cast on his right arm. Houy, a six-game starter at guard in 2019, will miss all of spring football but will be “ready to roll in the fall,” according to Narduzzi.

In other news, the Panthers are still waiting to hear from the NCAA whether Arizona State transfer quarterback Joey Yellen will be eligible to play this season. Pitt requested a transfer waiver for him to play in 2020.

The Panthers will hold 14 more spring workouts, concluding with the Blue-Gold Game April 11 at Heinz Field.