Gallagher advocates for more state funding in next fiscal year 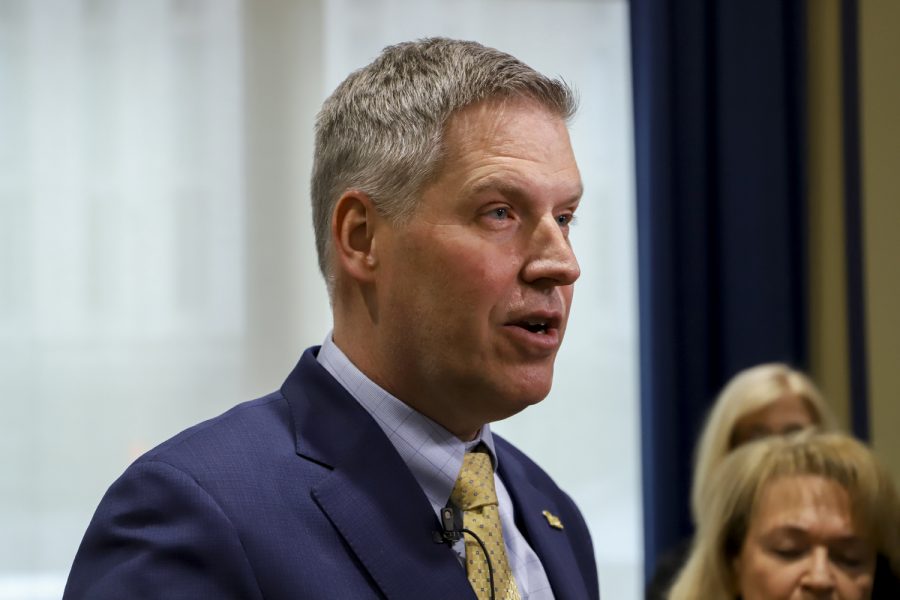 Chancellor Gallagher spoke with the State Senate Appropriations Committee in Harrisburg on Tuesday.

By Janine Faust and Benjamin Nigrosh

Chancellor Patrick Gallagher testified Tuesday in front of the State Senate Appropriations Committee in Harrisburg with other executives from Pennsylvania universities, hoping to increase state funding for higher education for the 2020-21 fiscal year.

During his speech to the Committee, Gallagher, who spoke as part of a panel with executives from other Pennsylvania state-related universities, including Penn State, Lincoln and Temple, focused on how state-related universities have been increasingly contributing to financial aid. He also said schools play a role in attracting new people in the face of the state’s stagnating population growth.

Pitt has requested a 5.5% increase in funding from the Commonwealth for 2021. However, in Gov. Tom Wolf’s proposed $36.1 billion budget released in early February, all four state-related universities would receive flat funding. Pitt received a 2% increase, or around $3.5 million, in funding last year after initially requesting a 6.5% increase, or $9.1 million. Following this, tuition rates went up 2.75% for most in-state students and 5% for most out-of-state students for the current academic year.

State senators were largely noncommittal about the amount of money Pitt would receive for next year and spent a large portion of the hearing discussing other issues facing the University, such as student debt, the changing landscape of technology in the workforce and the growing importance of technical education.

State Sen. Andrew Dinniman, D-19, along with other state senators, was concerned with the rapid rate of technological change that education has to keep up with.

“One of the things that I hope will end here, that I’ve witnessed for the 14 years I’ve been here, is we simply give out the money based on the way we’ve always done in the past,” Dinniman said. “The plain fact is, the present is not the past, the present is very different, the rate of change we’ve never experienced in human history before, and all your institutions are going to be different whether you like it or not.”

Gallagher said during his testimony that there has been “a lot of discussion about tuition freezing.” Pennsylvania graduates shoulder the second-highest amount of debt per state in the United States. Pitt itself rests at No. 14 on LendEDU’s list of public U.S. institutions with the highest student loan debt.

“The problem when you freeze tuition is you might freeze in a problem,” he said. “And one of the problems is the amount of unmet financial need that we are seeing amongst some of our students.”

Gallagher said Pitt has put a lot of institutional funding towards helping students afford tuition and pay off student debts. At a Board of Trustees meeting in 2019, Gallagher cited how funding from the Commonwealth for Pitt went down to 34% today from 56% in 1995, leading the University to launch a slate of new financial aid programs this year. He touched upon those in his speech to the committee, including the Pitt Success program, which matches federal Pell grants to students with the largest amount of financial need, and Panthers Forward, which allows recent graduates with federal loans to receive up to $5,000, which they then “pay forward” to future graduates in coming years.

Gallagher told the State Senate that because of this, Pitt’s largest and fastest-rising cost is financial aid.

“And that’s probably a good kind of cost increase to be having because it means we’re pushing aid to students and families that need it,” he said. “Of all the financial aid providers there are for students — federal, state, local — they’re all pretty much flat. The only one that has sort of grown has been institutionally provided financial aid.”

Gallagher also referred to Pitt’s efforts to focus on growing Pennsylvania job markets and bring in people from other states — Pitt’s out-of-state student population has been rising for several years now.

Pennsylvania’s population, while not shrinking, has flatlined recently — it’s had the 44th-slowest growth rate out of 50 states in the last decade, meaning the population is growing older. The small amount of growth is due to 16 counties in the southeast — in all other regions, populations have dropped by about 125,000. And while employment has increased in the Pittsburgh Metropolitan Statistical Area, other western counties combined lost a net of 13,000 jobs, according to Penn State’s College of Agricultural Sciences.

Gallagher discussed Pitt-Bradford’s community efforts to focus on aligning with employers in the region during his speech.

“A lot of this is outreach focused on making sure that our economic programs and our community engagement programs are aligned with the manufacturing and business community there,” he said. “One of the interesting focal points that we’re seeing very high demand for there is the health care region and qualified health care workers.”

Gallagher told the Committee that he understands the difficulty of trying to spread funding across several different priorities and that the General Assembly is likely thinking about how to more wisely reallocate money. He advised, however, that they make more investments in students to draw more people to Pennsylvania and increase economic growth.

“There’s two ways to raise the per-capita spending per student. One is to prosper as a commonwealth and be able to make those investments, and the other is one is to watch our population go down and have less people to divide by,” he said “And I hope we choose the first one and not the last.”

Gallagher said there has been no time in history when human ability and talent were more tied to opportunity.

“We often get mesmerized by the technology, but it’s really — you ask any company, you ask any employer — the number one thing they talk about is talent and people and workforce,” he said. “And so I think that kind of return on investment, that kind of impact is one where we would be healthier, happier and economically better off.”