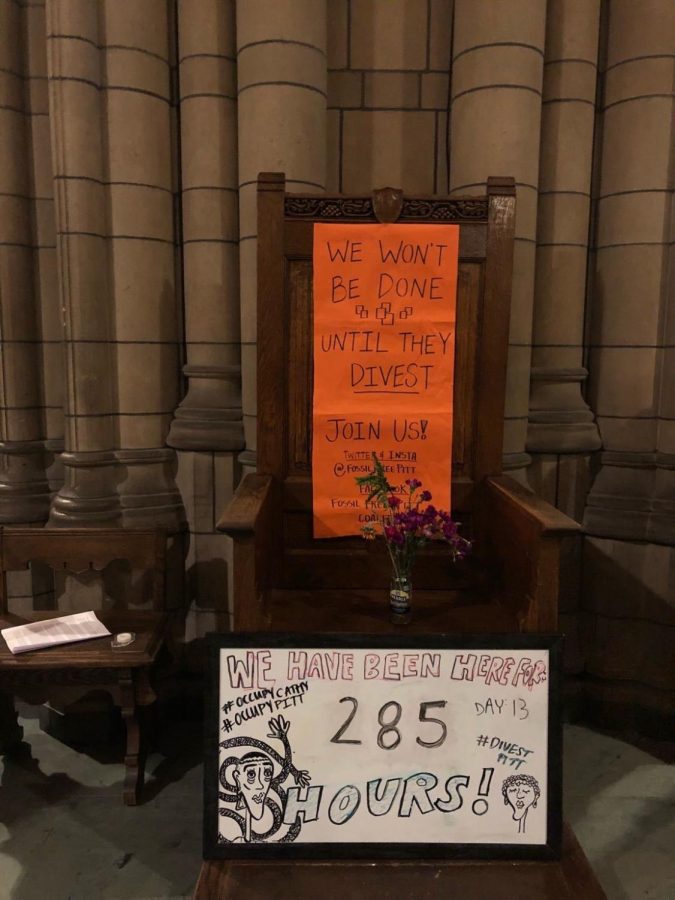 The Fossil Free Pitt Coalition ended their occupation of the Cathedral at 9 a.m. this morning, according to organizers.

“We are grateful to all the students faculty staff and community members who came out to support us with things ranging from bodies to food to just general spreading awareness of our campaign,” Prem Rajgopal, an FFPC organizer and graduate student in sustainability engineering, said. “We’re also grateful to all the representatives and candidates who stopped by and amplified our message.’

FFPC had begun occupying the Cathedral commons on Feb. 21 at noon, calling on the Board of Trustees to vote to divest parts of Pitt’s $4.3 billion endowment from the fossil fuel industry at their winter board meeting on Feb. 28. They also demanded that trustees with direct ties to the fossil fuel industry to abstain from the vote, the inclusion of a public comment period at board meetings and for students to “have a seat at the table” regarding any ensuing reinvestment decisions.

The Board ultimately approved measures  to create a formal socially responsible investing process for its $4.3 billion endowment and to support carbon neutrality by 2037, but did not vote to divest despite a disruption from FFPC members at the meeting. Following this, FFPC had said it would continue its occupation of the Cathedral indefinitely. During this time, it was visited by several advocacy organizations as well as local political candidates and officials.

Rajgopal said FFPC instead decided to end the occupation after about 12 days because it was taking its toll on participating students and not much was being “accomplished” by staying in one space. Organizers also wanted to ensure that when the group left, it was based on their own decision, not administration’s.

“Making sure we were not neglecting our collective and individual well-being was part of it,” he said. “We also wanted to send a message that we were leaving on our own terms when students were still on campus.”

Before leaving, occupiers left a note on Chancellor Patrick Gallagher’s office door. The letter, a copy of which is embedded below, decries the Board of Trustees’ decision not to vote on divestment on Feb. 28 and its ultimate course of action as well as a lack of transparency within Pitt administration.

“In the years to come, the climate crisis will only worsen and institutions like the University of Pittsburgh will surely look increasingly foolish for taking half-measures and non-measures when bold action is required,” FFPC said.

Rajgopal also said administration did everything “within their power” to get protestors to leave the space. FFPC disavowed “the authoritarian” response from administration to their occupation in their letter to Gallagher as well.

“In spite of this community power, administration officials such as Dean Bonner, Linda Williams-Moore, and Summer Rothrock have harangued us with petty and hollow administrative directives to remove our signs, study materials, and basic overnight supplies.,” they said. “This reveals a deep disconnection between your administration and the community at large. We hope that you learn from this occupation and take the time to reevaluate your relationship with those that are affected by your inaction.”

“The University’s ongoing strategies to combat global climate change—some of which were discussed at the Feb. 28 meeting of the Board of Trustees—involve a multifaceted and wide ranging community effort. This comprehensive approach is our best path to realizing meaningful change,” he said.

Rajgopal said though the occupation is now over, FFPC was able to reach a wider audience with their message through it. He said one of the most significant parts of the occupation was getting to host other student organizations in their space and being “open and accessible” to everyone for a period of time.

Rajgopal said FFPC has other plans to make their voices heard between now and the end of the academic year, but for now members are taking some time to recharge.

“We’re human beings first, students second and organizers after that,” he said. “We recognize the importance of taking care of ourselves and our responsibilities.”