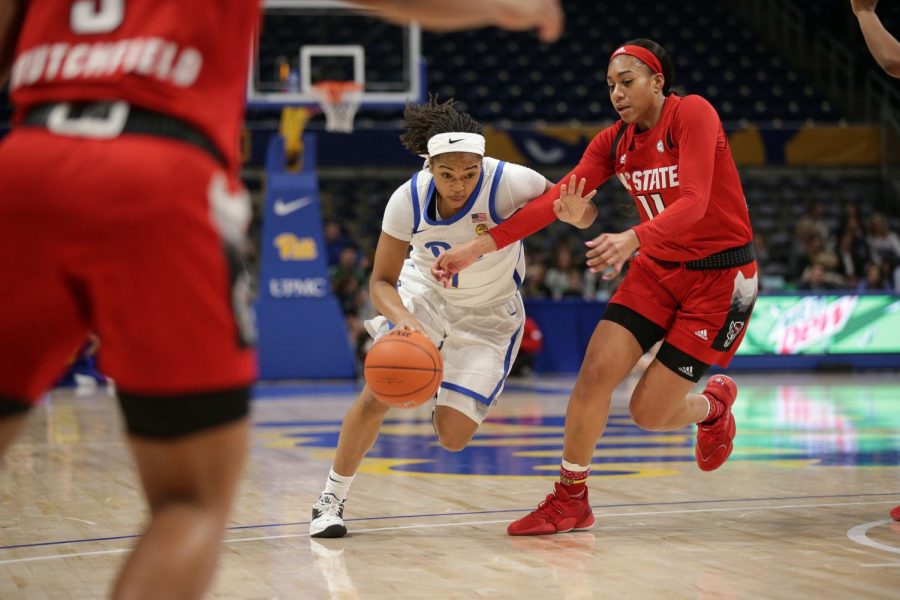 First-year guard Dayshanette Harris (1) attempts to drive toward the hoop during Pitt’s 88-44 loss to NC State.

Pitt first-year guard Dayshanette Harris’s go-ahead floater with 2.7 seconds remaining sealed the No. 15 seed Panthers’ improbable and incredible 67-65 upset over No. 10 seed Notre Dame in the first round of the ACC Tournament Wednesday afternoon.

DAY DAY FOR THE LEAD! pic.twitter.com/z6HhH07zPe

It was a fitting end in Greensboro, North Carolina, for Harris, who also stole the ball on Notre Dame’s last possession to seal the win. The upstart young point guard — who earlier this week earned ACC All-Freshman Team honors — embraced the big stage, recording her first career double-double with 20 points and 10 rebounds.

But Harris didn’t have to carry the team on her own. For the first time in a long time, Pitt’s supplementary players stepped up in a major way. Junior guard Gabbie Green shot a scorching 4-5 on 3-pointers — and sophomore guard Ismini Prapa was somehow even better, making the most of her season-high 22 minutes to go 4-4 from beyond the arc.

The victory carried added weight for a team that learned earlier Wednesday that Lorri Johnson, one of Pitt’s all-time legends, had passed away. Johnson, who played for the Panthers from 1987-91, scored 2,312 career points — more than any other male or female basketball player at Pitt. Her No. 24 jersey was retired and raised into the Petersen Events Center rafters during a ceremony last year.

Despite the news hanging over their heads, the Panthers played one of their best games of the season to earn one of the program’s biggest victories in recent memory.

The Panthers (5-25 overall, 1-17 ACC) ended their nine-game losing streak and picked up their first ACC tournament victory since 2016. They also beat the Fighting Irish (13-18 overall, 8-10 ACC) for the first time since 2009, ending a 12-game losing streak against them.

It was also the first win by a No. 15 seed in the ACC Tournament since Virginia Tech pulled off the feat in 2015.

Pitt struggled early in the first quarter and Notre Dame zipped out to a 7-0 lead. The Panthers then started to exploit Notre Dame’s zone, moving the ball around and looking for open jumpers instead of trying to attack the paint.

The approach paid off, as Green and Prapa made two 3-pointers each to end the quarter with Pitt trailing 16-12.

The second quarter saw Pitt utilize a different approach, with Harris and first-year guard Amber Brown getting into the lane and scoring from within the zone. Both players contributed to a 12-2 run that forced Notre Dame head coach Muffet McGraw to call a timeout halfway through the second quarter.

Prapa continued to score for the Panthers, finding her place on the perimeter and draining two more 3-pointers. Green also made two 3-pointers and first-year guard Emy Hayford chipped in another as Pitt created an eight-point lead at the 3:15 mark in the third quarter.

Notre Dame took back the lead to start the fourth quarter, capping off a 12-2 run from the previous quarter and forcing Pitt head coach Lance White to call a quick timeout.

Harris steadied the Panthers after the break, attacking the rim and scoring six points over the next four minutes to build a 61-57 lead and force another Fighting Irish timeout. Notre Dame sophomore Katlyn Gilbert had a great chance to score with 45 seconds left, but Pitt first-year forward Rita Igbokwe came up with a crucial block.

Igbokwe finished the game with four blocks to give her 57 blocks this season, surpassing the first-year record set by Wanda Randolph in 1976-77. Gilbert exacted her revenge shortly after, stealing the ball off Hayford and dribbling down the court for a layup with 21 seconds remaining to tie the game at 65.

With the game on the line, Harris took the ball, ran around a double team by Gilbert and graduate guard Destinee Walker and then sent up a baseline floater that went through the net, giving Pitt a two-point lead with 2.7 seconds remaining. Harris stole Notre Dame’s inbound pass on the game’s final possession, solidifying the win for the Panthers.

Next, Pitt will put its newfound momentum to the test when it faces No. 7 seed Georgia Tech in the second round Thursday at 6 p.m. The Panthers lost their only previous meeting against the Yellow Jackets this season on Feb. 6, 77-48.