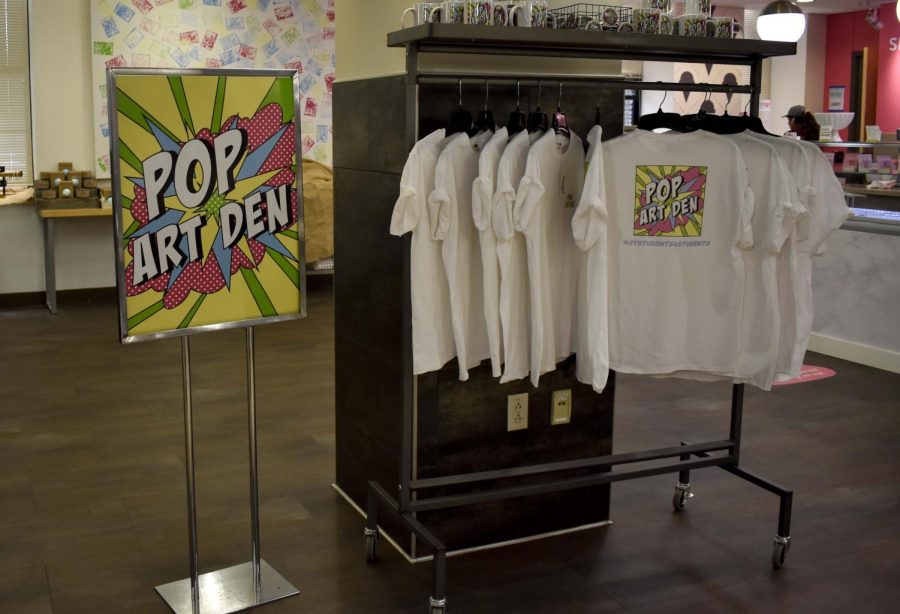 The Pop Art Den was founded by the College of Business Administration as part of a class and became a full-fledged space for student internships and for student artists to sell their work.

By Delilah Bourque and Beatrice McDermott, The Pitt News Staff

After months of planning and renovations, the Pop Art Den, a student-run space on campus for student artists to sell their work, opened on Feb. 13 in the University Store next to Millie’s Ice Cream. Students in the College of Business Administration created the concept of the Pop Art Den last spring as part of a class assignment to create paid internships around campus for business students. Now, the Den both provides paid internships for business majors while carving out a place for student artists to sell their work.

Currently, half of the items for sale, including art and jewelry, are made by three Pitt students. According to the manager of the Den, Laura Basciotta, a junior marketing and supply chain management double major, plans to feature two more student artists are in the works. Prices for the artwork range between $15 and $40, and the featured local and student artists collect 60% of sales profit.

The Pop Art Den relies on student leadership to support the growing business. Basciotta started as a project intern for the Den, but eventually took on the role of student manager last month when the Den officially opened. Her new role puts her in charge of overseeing the entire space. Basciotta said a similar student art shop at her dream graduate school, the Savannah College of Art and Design, inspired her to join the Den.

“Pitt doesn’t have anything for student artists, and even though I can’t create art, I know a lot of other people on campus are looking for an outlet beyond social media,” Basciotta said.

According to Emma Skledar, a junior marketing major, the Den’s main goal is encouraging students to express their creativity, while also supporting aspiring artists. Skledar is responsible for running the Den’s Facebook and Instagram pages. She said she applied for the position of sales associate, but was asked to work as the social media manager due to her experience with marketing.

“There’s a lot of awesome stuff. It’s not what you would expect. There’s bath bombs, candles, jewelry and art. It’s a little bit of everything,” Skledar said.

Students are encouraged to submit their artwork to the Pop Art Den via social media or visit the space during open hours, which are 2 to 6 p.m. on Tuesday and Thursday, 4 to 8 p.m. on Wednesday, 2 to 5 p.m. on Friday and 11 a.m. to 5 p.m. on Saturday. All submissions are handled by Olivia Rapp, who holds the position of student buyer. The Pop Art Den hired Rapp, a junior marketing and supply chain management major, in July and is looking forward to expanding inventory now that the space is available to students.

“I think the only art we’re looking for is something that you can take home with you. So far it’s been necklaces that people are making, cross-stitching, posters, paintings and things like that. We’re really open to just about anything that you can sell, whether that’s a CD or a painting or a drawing,” Rapp said.

Part of Rapp’s job as student buyer is making sure the contributing artists are rewarded for their talent and effort. She said she does this by helping artists balance their profits and supply costs to ensure their partnership with the Pop Art Den is successful.

So far, the Den has partnered with three students whose artwork includes handcrafted jewelry, Pitt-themed posters and colorful cross-stitch patterns. The 40% of the profit not kept by the artists is used to expand the Den and pay student employees.

Allie Cohen, a senior communications major, combines vibrant graphics to create eye-catching posters for the Pop Art Den. One currently for sale is a collage of all things Philly — from Wawa to cheesesteaks. She said she draws inspiration from her favorite rappers, like Travis Scott, as well as Philadelphia, which is her hometown. Her Instagram handle, @CreativeJawns, was even inspired by the city.

“I’m a creative jawn. I know a lot of students are from Pittsburgh and Philly, so I tried to include those cities,” Cohen said.

The Den also works with Maria Wallace, a senior anthropology major. Wallace said she became interested in crafting jewelry over the summer, when she designed her first pair of earrings. She enjoyed the process so much that she decided to start her own business using social media and began selling her art on Instagram.

She makes metal necklaces with Pitt-themed slogans such as “hail” and “H2P” or initials impressed in them. The Den soon messaged her on Instagram to ask if she wanted to be featured in the store where, Wallace said, her art sales have taken off.

“I’ve always been a crafty person. When I was looking for earring ideas, I saw how to impress metal, and I was like, that’s easy, I can totally do that. So I invested in the equipment and started doing small ones for my friends,” Wallace said. “In the first week, things started selling really well. I was impressed. They’ve marketed really well for me. It’s increasing my creativity.”

With the 40% cut that the Den keeps, Basciotta said they plan to first offset the upfront costs of opening the space, creating Pop Art Den merchandise and purchasing the non student-made items in the Den. The long term goal, she said, is to give back to students via a scholarship.

Basciotta’s vision for the Pop Art Den is of a multi-use space where students feel comfortable presenting their artwork, studying with friends or just snacking on ice cream from Millie’s. She said she wants students to know that the Den isn’t just a store — it’s also a hub for creativity on campus where everyone is welcome.

“It can act as a club space for leadership boards, executive boards and for people just to hang out. It’s seriously all for the students and it’s a functional space that can change over time. This is a place where you can come to make your mark,” Basciotta said.