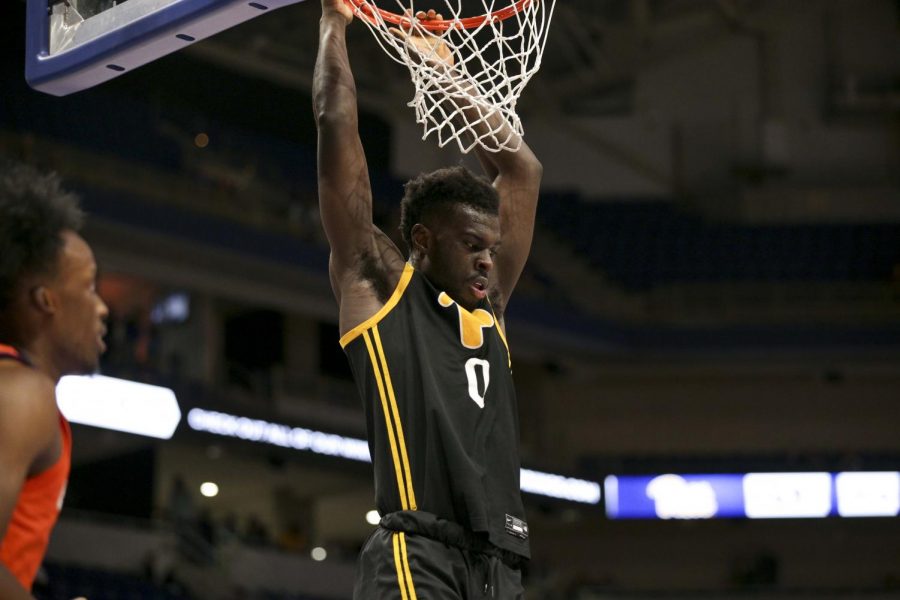 Pitt men’s basketball squared off against not just a strong opponent, but a daunting home court advantage as well on Wednesday night. The Panthers, losers of seven in a row, traveled to Atlanta to face Georgia Tech, winners of six straight home contests.

The Yellow Jackets (16-14 overall, ACC) came out hot and the Panthers (15-16, ACC) couldn’t recover as they limped to a 73-57 loss. Georgia Tech’s 46% clip from 3-point distance proved too much to overcome for offense-adverse Pitt.

Junior guard Jose Alvarado was all over the court for the Yellow Jackets in the first half. He scored 10 points, collected five rebounds, dished out four assists and added a blocked shot. Neither of Pitt’s best defenders, sophomore guards Au’Diese Toney and Trey McGowens, could contain one of the ACC’s hottest scorers.

His Jackets shot a strong 48% from the floor through the first 20 minutes and assisted on eight of 12 successful field goals. They moved the ball effectively and caught Pitt with poor floor balance in transition. Taking advantage of odd-man runs, they scored 18 points off of Pitt turnovers.

Meanwhile, the Panthers played ugly offense. Their struggles with the ball, while not a new phenomenon, were outlandishly abysmal in Atlanta. Prior to a trio of consecutive triples to end the half, Pitt shot 4-22 from the field for a grand total of 12 points.

Pitt tallied more turnovers than field goals in the first half.

Luckily for the Panthers, the aforementioned collection of 3-pointers from junior guard Ryan Murphy, first-year guard Gerald Drumgoole and sophomore guard Xavier Johnson kept them within striking distance. After trailing by as many as 18 points, they entered halftime down only nine.

Pitt continued to show signs of life after halftime. A pair of free throws from graduate transfer forward Eric Hamilton trimmed Georgia Tech’s lead to four with less than two minutes having passed in the second period.

But then, junior forward Cole Evan came alive for the Jackets. He scored six on an 8-2 Georgia Tech run that pushed its lead back to 12 and the game out of Pitt’s reach for good. Poor shot selection and more sloppy ballhandling from Pitt aided the Tech run.

The Panthers never got closer than 10 for the remainder of the game. They were out-rebounded, out-shot and out-hustled all evening. Georgia Tech played like a team energized by the emotions of 2020’s regular-season finale, while Pitt looked eager to turn the page from a season that has fallen well short of its own lofty expectations.

Hamilton, a native of Atlanta, turned in a strong homecoming game. He finished with 12 points and nine rebounds in 23 minutes of work. First-year forward Justin Champagnie followed close behind with 11 points on a perfect 7-7 from the free throw line.

Pitt will now turn its attention to the ACC Tournament, beginning March 10. The Panthers await their seeding and opponent, both of which will be decided following this weekend’s slate of games.