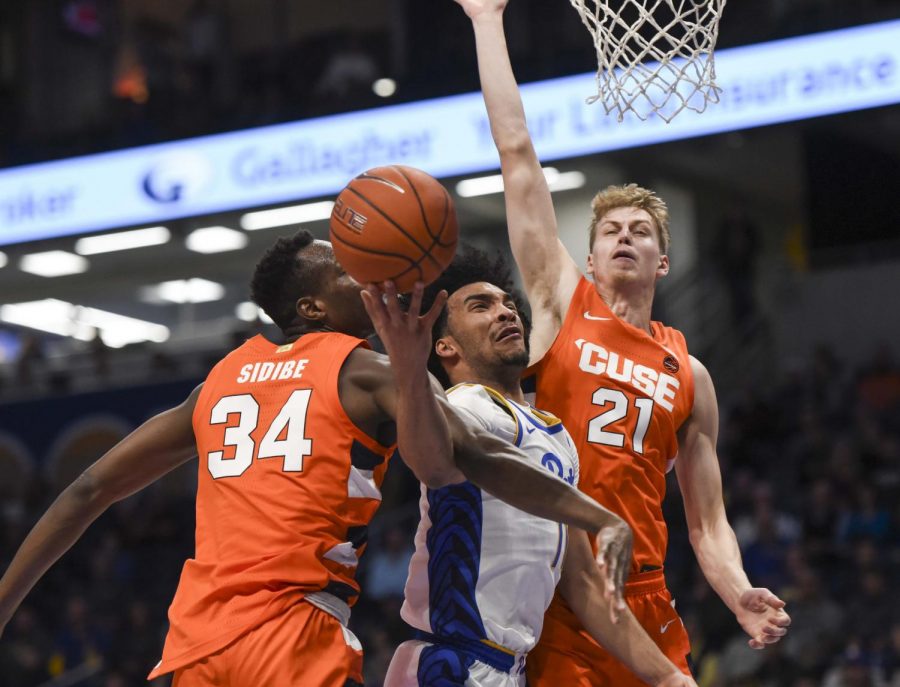 Pitt men’s basketball entered the ACC Tournament with their backs firmly against the wall. Losers of seven in a row, the Panthers had played some of their worst basketball of the season as they prepared for the postseason.

But at their most desperate, the Panthers were efficient, tenacious and energetic at the end of a dragging ACC schedule. And after trailing for most of the game, Pitt unearthed a new level of emotion. A 13-4 run in the twilight of the second half propelled the Panthers (16-16 overall, 7-14 ACC) to a 81-72 victory over Wake Forest (14-17 overall, 6-15 ACC) in the first round of the ACC Tournament on Tuesday evening.

Both offenses started hot. Pitt’s pair of sophomore lead guards, Xavier Johnson and Trey McGowens made their first three combined shots, while the Deacons’ duo of forwards, sophomore Isaiah Mucius and junior Olivier Sarr made seven of their first eight.

Mucius and Sarr scored 17 of Wake Forest’s first 19 points and the Demon Deacons led by three at the under-12 media timeout. They stretched that lead even further by way of the three-point shot.

Pitt was the ACC’s worst team at defending the three all season and Wake Forest took advantage. They hit a trio of consecutive 3-pointers to push their advantage to eight with 7:28 remaining in the first half.

But the Panthers responded quickly. In 93 seconds, they got out in transition and scored six straight points. Two straight fast-break layups from first-year forward Justin Champagnie capped the burst.

Pitt ended the half down only one, and following the intermission, responded to Wake Forest’s offensive blitz by locking down Wake Forest’s threat from distance. After they nailed five three pointers in the first 12 minutes of gametime, Wake made only three over the game’s final 28 minutes.

Pitt countered with explosive scoring from their young stars. McGowens scored eight points in a blur after only attempting three shots in the first half. Champagnie also carried a Pitt offense that has been prone to long scoring droughts this season. He scored 15 of his career-high 31 points in the second period.

The Panthers and Demon Deacons traded baskets for much of the second period and neither team was able to gain more than a four point lead. But an 8-2 Pitt run in just over two minutes gave Pitt a nine point lead with 1:42 left to play.

They would not look back. Wake Forest scored only two points for the rest of the game and the Panthers escaped with their second ACC Tournament win in as many years.

Johnson was an expert distributor on Tuesday, finishing with eight assists to only three turnovers to go along with 10 points and five rebounds. Sophomore forward Au’Diese Toney, who injured his ankle in the second half and is questionable to play in Pitt’s next game, also reached double-figure scoring. Coulibaly totalled 10 points and seven rebounds in only 15 minutes of action.

The Panthers are now forced to embrace college basketball’s March mantra: survive and advance. Less than 20 hours removed from tip-off of their game vs. Wake Forest, Pitt will face their second round opponent.

They will face NC State at 2p.m. on Wednesday from Greensboro, North Carolina.