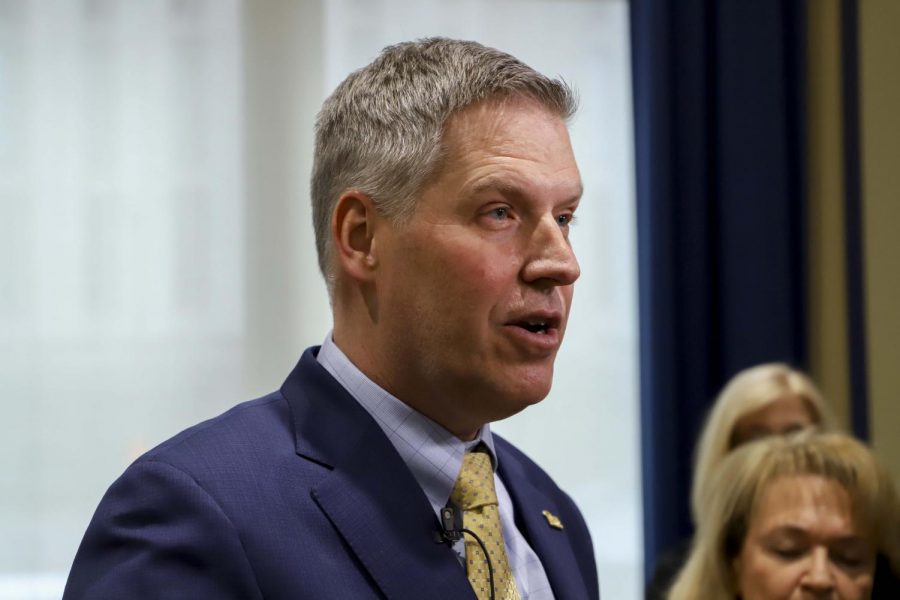 Chancellor Patrick Gallagher at the February meeting of the board of trustees.

Chancellor Patrick Gallagher announced Wednesday that Pitt will cancel classes next week and then move them online indefinitely beginning March 23, in the wake of the global SARS-CoV-2 coronavirus pandemic.

“This is an unprecedented scenario for U.S. universities. It is a situation that is changing dramatically—and daily,” Gallagher said. “I believe that these new steps are necessary to strike a prudent balance between protecting our community and continuing our academic mission.”

The University will allow students to return to campus to collect items from residence halls, but strongly encourages staying away from campus and will grant partial room and board refunds for those who do so. It is also encouraging staff to telework. Admissions visits will continue and the library will remain open on campus.

Pitt has also cancelled study abroad programming for the summer term and all nonessential events exceeding 25 participants. All nonessential domestic and international University travel is restricted until further notice. It has yet to decide whether changes will be made to athletics events, research programming or the April 26 spring commencement.

Gallagher added that the moves do not affect the status of campus facilities — all campuses will remain open and operational, and students services will continue to be provided to those who cannot return home. Official information from the University’s Department of Public Safety can be found at emergency.pitt.edu.

The decision arrived days before the end of spring break, and followed similar moves by other major institutions, including Harvard, Ohio State and West Virginia universities. Penn State announced it was suspending classroom instruction earlier today with plans to offer classes online through April 3. Cases of the virus, and the COVID-19 disease it causes, number more than 113,000 cases worldwide, 1,000 cases nationwide and 15 presumptive positive or confirmed cases in the commonwealth.

Chris Bonneau, the president of Pitt’s Senate, said the body has received multiple updates per day from administrators and has helped to guide final University decisions.

“We continue to be involved with identifying problem areas and trying to get solutions and resources to those who need them,” Bonneau, a political science professor, said.

He added that Pitt had placed faculty on notice several days ago about the possibility of holding class online, and the week-long extension of spring break should help professors prepare for the March 23 resumption of instruction.

“I am sure there are going to be issues that need to be corrected as we go down this road,” Bonneau said. “But I think we’re in as good a position as we can be, all things considered.”

The U.S. Centers for Disease Control and Prevention has encouraged citizens to take steps to protect themselves, such as to avoid touching their eyes, nose and mouth, clean their hands often and practice social distancing. The agency urged citizens to contact their doctor if they developed a fever, cough or shortness of breath around 2-14 days after coming into close contact with a person known to have contacted the virus, or recently travelling to an area with widespread or ongoing community spread of COVID-19.

Pitt researchers are working to alleviate the spread of the disease. At a Senate Council meeting on Feb. 13, Paul Duprex, the Jonas Salk chair for vaccine research and director of Pitt’s Center for Vaccine Research, said Pitt scientists will receive samples of SARS-CoV-2 to develop a vaccine or other intervention method.