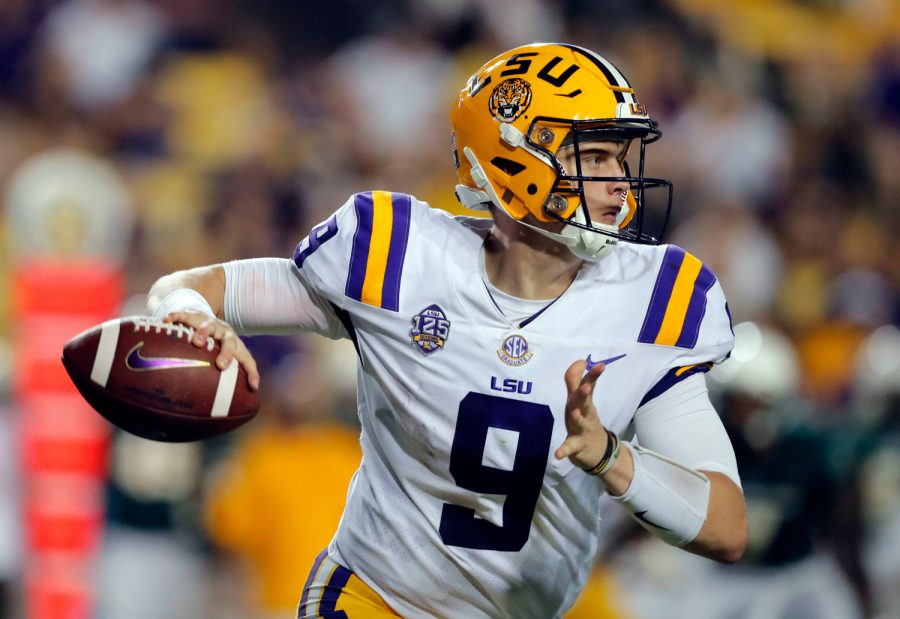 LSU’s Heisman-winning quarterback Joe Burrow will likely be claimed as the first overall pick in the 2020 NFL Draft.

With the NFL Scouting Combine in the books, mock draft season is well underway. Each year, the combine has massive implications for the upcoming NFL Draft — which won’t be held in Las Vegas as originally scheduled, but should still be held in some capacity on April 23. In this mock draft, I’ll predict how the first round will unfold.

Unchanged from our first edition, Burrow is virtually a lock to be the No. 1 pick in April. The Bengals will count on him to step in right away and provide a much needed culture change, similar to the one he brought to LSU.

Here the Redskins face a decision much like the Arizona Cardinals did last year. The Redskins already have a first-round quarterback on their roster in Dwayne Haskins. But after a bumpy rookie season, Washington may prefer to give new head coach Ron Rivera his quarterback of choice.

The Lions find themselves in a great position as arguably the best defensive player in the draft falls right into their laps. Young has the potential to be a franchise-altering player and could completely reshape the Lions defense.

In the first mock trade of this draft, head coach Jon Gruden and the Las Vegas Raiders give up both of their first-round picks to move up and grab their quarterback of the future. Herbert’s stock has done nothing but rise since the college football season ended and his strong performance at the combine ensured his place among the top quarterbacks in this draft.

The Dolphins get the best cornerback in the draft as a consolation prize for not being able to get their hands on Tagovailoa or Herbert. Okudah is a fantastic starting point for the Dolphins to completely overhaul their defense this offseason.

After deciding to part ways with longtime quarterback Philip Rivers, the Chargers turn the page and opt for the high ceiling of Love. He has received a ton of hype since the college football season ended and after wooing teams at the combine, he may climb even higher.

One of the players that helped themselves the most at this year’s combine was Simmons. The defensive Swiss Army knife showed off his athleticism by running the 40-yard dash in 4.39 seconds — the fastest time by far among linebackers. Simmons will be placed in the heart of new head coach Matt Rhule’s defense.

The Cardinals would be wise to use their top-10 selection on the bruising tackle from Alabama in order to solidify their offensive line. If Arizona really wants to get the most out of quarterback Kyler Murray, protecting him is paramount.

The Jaguars’ defensive front is going to be in need of reinforcements, especially after pass-rusher Yannick Ngakoue declared he will not be returning to Jacksonville. Brown can step in on day one and provide Jacksonville with plenty of pressure on opponents’ offensive lines.

Becton turned plenty of heads at this year’s combine, impressing scouts with his fluid movement in a 6-foot-7, nearly 370-pound frame. Cleveland quarterback Baker Mayfield certainly didn’t meet expectations last year, but his struggles can be attributed in part to the fact that he almost never had a clean pocket to throw in. Becton should provide Mayfield with ample protection to rebound this coming year.

The only other tackle that may have helped his draft stock more than Becton at the combine was Wirfs. He has the ability to play both tackle positions and can also swing inside and play guard. Based on Iowa’s track record of producing offensive line talent, Wirfs is certainly poised for instant success.

The rationale behind the Giants trading out of their top-five pick is that their defense has several holes, so two picks in the first round can give them two instant contributors on that side of the ball. With their first choice they get the second-best pass rusher in the draft after Young. Chaisson is still considered a slightly raw prospect, so his ability to improve is intriguing.

The Colts are a team to watch to trade up for a quarterback if they do not land one in free agency, but the quarterbacks got snatched up quickly in this mock draft. So instead, the Colts grab a fast-rising defensive linemen which fills a definite need.

In the second trade of this mock draft, Philadelphia moves up to select the top receiver in this year’s draft. The Eagles receiver issues were no secret, and at one point they found themselves with former college quarterback Greg Ward as their No. 1 receiving option. Jeudy will fill a glaring need and bring the Eagles’ offense to a new level with his playmaking abilities.

If the Broncos want to invest in quarterback Drew Lock’s future, they should be drooling over Thomas at this point in the draft. He can provide continuity to the Broncos’ young core on offense with Lock, receiver Courtland Sutton, running back Phillip Lindsay and tight end Noah Fant.

An integral part to the Patriots retaining quarterback Tom Brady is adding weapons on offense for him to operate with. The Patriots are normally never ones to trade up in the draft, but they make this move to grab the dynamic Lamb. He will certainly take New England’s offense to a new level with his talent and ability to improve.

The Cowboys have a lot of financial decisions to make in the near future, which could lead to receiver Amari Cooper being the odd man out. If that scenario plays out, Dallas will need to give quarterback Dak Prescott a go-to receiver and Ruggs could certainly fill that role with his game-breaking speed.

Even though the Dolphins missed out on their quarterback of choice early in the draft, they’ll still need to protect whoever is at the helm next season. Jones was a late riser in the draft process, but his first-round status is no longer in question after a strong showing at both the Senior Bowl and combine.

After acquiring this pick from their trade with the Raiders, the Giants grab another defensive piece to hopefully remedy that unit. Murray’s draft stock is definitely trending upward after nailing the combine both on and off the field, and the Giants are desperate for a talent upgrade in the middle of their defense.

Who would have thought last year that cornerback would be a position of need for the Jaguars with perennial studs Jalen Ramsey and AJ Bouye as their starters? But after trading Ramsey in-season and trading Bouye earlier this week, Jacksonville would be lucky to select Henderson here. If they can land both him and Brown, they’ll have a solid core in the middle of their defense for years to come.

After trading down, the Buccaneers still find themselves with a franchise quarterback. It’s possible that Tampa Bay re-signs current quarterback Jameis Winston and still drafts Eason with the intention of providing a bridge for him to become the starter in a season or two.

The Bills are well-suited in this draft thanks to the vast depth at receiver this year. They can still find themselves a premier talent this late in the draft and here they go with the big-body receiver in Higgins. He will provide some more vertical opportunities for the Bills’ offense.

After their mock trade with the Patriots allowed them to acquire more picks later in the draft, the Falcons address a dire defensive need with this pick. Fulton should make for a nice pairing with Desmond Trufant and the rest of the Falcons secondary that was plagued by injuries this season.

With a mostly complete roster already, the Saints could go plenty of directions with this pick. But here they opt to add another explosive piece to their offense. New Orleans could use a legitimate No. 2 receiver behind Michael Thomas, and Shenault can be that guy.

Much of the Vikings secondary is slated to hit free agency, and it’s unclear if they will be able to retain anyone. That being said, Minnesota must address its defensive backfield in the first round. Terrell will have to step up into a big role almost instantly.

With the last of their first-round picks, the Dolphins scoop up one of the top runners in all of college football. Taylor enjoyed an illustrious college career at Wisconsin and the Fins will hope that his college success translates to the NFL.

The Seahawks need reinforcements in the defensive trenches, and Gallimore is a hot name among defensive linemen. He had a strong showcase at the combine and it wouldn’t be a shock if he gets drafted even higher than this.

The Ravens likely would have gone with a wide receiver in this spot had Epenesa not been available. They could potentially lose Matt Judon to free agency, who was a key part of their defensive success. Baltimore would be very fortunate to still see Epenesa on the board at this time, considering he possesses top-20 talent.

This is another selection that comes on the heels of losing a key defensive player to free agency. The Titans may not be able to hold onto Logan Ryan, which would make cornerback an immediate position of need coming into the draft. Diggs’ Alabama pedigree should serve him well on draft night.

Perhaps no one helped themselves at the NFL Combine more than Mims, as he firmly put himself into the first-round conversation. The Packers saw their defensive unit shine last year and could use a solid receiving option in case injuries strike them once again.

Despite the dominance of the 49ers defense in 2019, they may not be able to retain free agent Jimmie Ward. McKinney would be the perfect replacement, playing the role of centerfield ballhawk that could complement San Francisco’s unstoppable pass rush up front.

The Chiefs offense showed last year that it has the capacity to operate without a star player at running back, but adding a player like Dobbins would open new doors for an already potent unit.