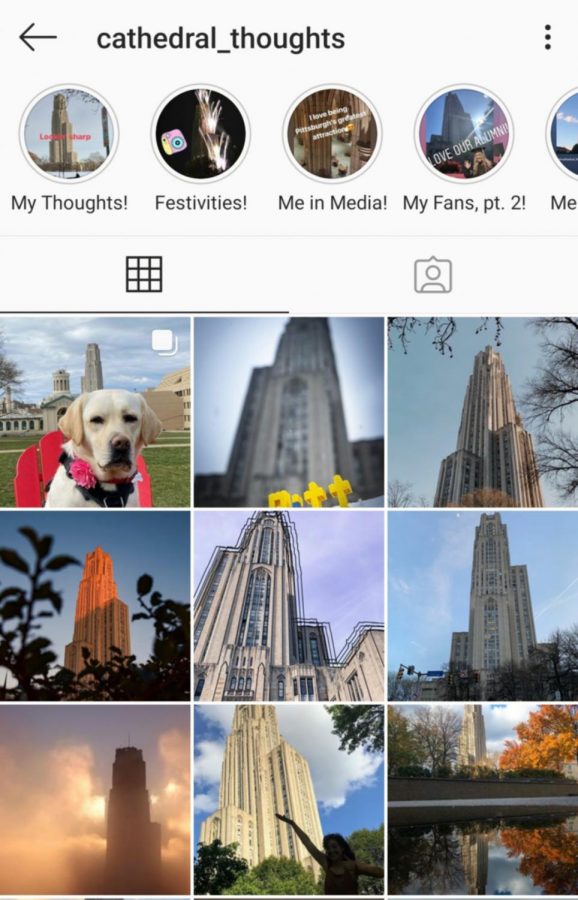 If you’re stuck at home and desperately missing Cathy, crave one last meal at Market or in need of at-home fitness motivation — look no further than your Instagram search bar.

Three popular student-run Instagram accounts — @cathedral_thoughts, @pittfoodies and @healthyintheburgh — are giving different looks into aspects of student life at Pitt. All three accounts have more than 1,500 followers. While many college-themed Instagram accounts talk about going to school generally, these users post about life at Pitt specifically.

One of these accounts, @cathedral_thoughts, personifies Pitt’s central building, the Cathedral of Learning. The account consists of hundreds of different pictures of the Cathedral — both taken by the account owner and submitted by others — from all of the campus’ best angles during various times of the day and in diverse weather conditions.

According to the account creator, who requested to be anonymous because her account is meant to personify the Cathedral, @cathedral_thoughts reinforces the fact that Cathy is more than just another building for Pitt students.

“I think that the personification of the building as a person, as the name Cathy with a personality, is kind of sweet because it feels as though it’s almost like a parent looking over us who’s always very supportive,” she said. “It’s kind of nice for people to have this kind of funny, cute, supportive Instagram account that’s a little spark into your busy day.”

Not only does the account highlight pictures of the Cathedral, but it also personifies the building with a distinct personality. All of the photo captions are written from Cathy’s point of view and include motivational phrases to get through the semester, along with some self-admiration. One such caption, under a picture of Cathy on a bright, sunny day reads, “Blue skies make the perfect background for me. Really makes my beauty stand out, don’t you think?”

“I just remember taking a bunch of pictures of Cathy, and seeing every other Pitt student have at least three pictures of Cathy themselves, so I thought to myself — wouldn’t it be hilarious if she could comment back to people?” @cathedral_thoughts said. “And just be very vain and old like an older building would be.”

Another account, @healthyintheburgh, began as a small personal fitness account for friends and family but has grown to 1,518 followers in the past two years. The account is filled with pictures of colorful, healthy meals, which are either homemade, from local restaurants or from Pitt dining locations. The owner, who chose to remain anonymous, posts her daily fitness routines and favorite snacks, along with a heavy emphasis on self-care and intuitive eating.

“I would say that the goal is probably just to help myself stay on track but also to show other students that there are different ways to stay healthy,” the owner said.

The account focuses on how to incorporate healthy eating and exercise choices into a daily college schedule here at Pitt. She posts pictures of robust salads from Market, bowls from Roots Natural Kitchen and frequently updates her story with her daily workouts, meals and daily life. According to [email protected], eating a balanced diet is attainable for college students and is not as complicated as it seems.

“I’m trying to show different ways that you can be healthy, and that healthy eating isn’t a clear-cut thing,” @healthyintheburgh said. “You don’t have to have a $100 grocery budget to eat healthy, and it’s not as hard as people think it is.”

Even though the owner posts about her own fitness goals, the purpose of her account has expanded far beyond personal benefit.

“I’ve definitely had a lot of people reach out to me and say, ‘Hey, your post really made me smile when I was having a bad day,’ or something like that — so this account helps both myself and others,” the account owner said.

Another popular account, @pittfoodies, run by junior civil engineering major Julia Jones, shows the sometimes not-so-perfect reality of eating as a college student. The account is filled with pictures of eccentric meals at Market, jugs of cereal-infused milk, Starship Robots, edamame in car heaters and more. Although the account shows the comedic side of college student dining, Jones has no ill will toward the services themselves.

“The first post was wholesome, but after that we just started making fun of Market,” Jones said. “Nothing against Market — we love Market — but sometimes you need to make fun of it to keep them humble.”

Along with obtaining a large following, owning a popular account has resulted in beneficial real-life experiences for the account curators. @healthyintheburgh has acquired sponsorships from brands such as Quest and GoPuff and has also partnered with Roots Natural Kitchen for a gift-card giveaway.

To acquire her sponsorships, @healthyintheburgh had to be proactive in reaching out to companies and promoting her account.

“It was just kinda me reaching out to brands — not even in terms of like getting paid, but instead asking if they wanted to post my picture or if they wanted to be tagged,” the curator said. “It’s good to get acclimated with talking to different businesses and figuring out things like that. I wouldn’t have foreseen it being this way a year and a half ago, but here we are.”

Additionally, Jones used her experience in running an account as a helpful advantage in a job interview. Her account led her to a partnership opportunity with Sodexo, working as a student liaison between the company and the student body the second semester of her first year. Jones said she got to include her experience with the account on her resumé.

“When they asked me what my hobbies were, I said that I was a micro-influencer and ran a funny account about the University,” she said. “I think that it made me sound interesting enough that I got the job.”

For @cathedral_thoughts, the positive impact on the Pitt student community and what her account represents are more important than the individual ownership of the account.

“Even though I am the actual human being behind the technology, I think the fun part about the account is that I don’t matter, it’s the face and voice of Cathy that matters most,” she said.