A requiem for Trey McGowens’ time at Pitt 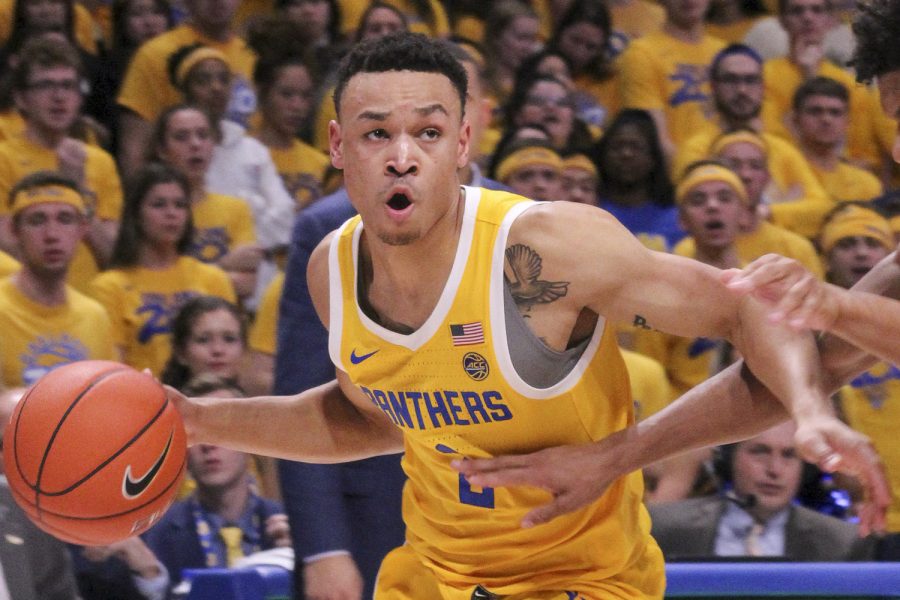 Sophomore guard Trey McGowens’ decision to transfer from Pitt was shocking, but not exactly surprising.

It didn’t take a certified social media detective to see the signs that had piled up in recent weeks. Some noticed that McGowens removed any mention of Pitt men’s basketball in his Instagram bio, while others pointed out his suspicious silence as other teammates welcomed new recruit Femi Odukale to the team.

For Pitt fans, McGowens’ departure is bittersweet. On the one hand, he helped usher in a new era of Pitt basketball after the program reached a historic low point. On the other hand, his inconsistent on-court production often left much to be desired.

McGowens will go down in the annals of Pitt basketball history as a key figure who helped majorly speed up the team’s rebuilding process after a winless ACC season in 2017-18. His significance to the program would have been secure even had he accomplished nothing on the court. By simply committing to Pitt as a highly touted senior at Virginia’s Hargrave Military Academy, McGowens moved the Panthers’ needle in a way that cannot be overstated.

When McGowens committed to Pitt on April 24, 2018, the team had very little going for it. Yes, Athletic Director Heather Lyke made the home run hire of esteemed Duke assistant Jeff Capel a month prior. But Capel’s roster to that point was even worse than the one he originally inherited, with top guards Marcus Carr and Parker Stewart electing to transfer.

And while Capel rightfully earned much of the praise for his role in bringing talented recruits to Pitt, it’s ultimately the player’s choice to decide where to play. As a top-100 prospect in his class, McGowens had plenty of options. He held offers from Clemson, Minnesota, Mississippi and St. John’s — none of which went winless in their conference the previous season like Pitt.

But McGowens took a gamble on Capel and the Panthers at a time when no one else had. He was the program’s highest-rated recruit since Steven Adams in 2012. His commitment was a vote of confidence in the team’s future. In a college landscape where so many talented recruits choose to benefit from a program’s established success, here was a player who scoffed at the path of least resistance and instead welcomed the monumental task of helping one of the nation’s worst college basketball teams regain its lost pride.

Four days after McGowens’ commitment, point guard Xavier Johnson followed suit. Four-star forward Au’Diese Toney joined them in June, giving Capel the ACC’s fifth-best 2018 recruiting class. Perhaps Johnson and Toney made their decisions completely independent of any outside factors, but it’s highly possible that McGowens’ initial commitment made Pitt a far more enticing destination and helped get the ball rolling for others.

In his first game donning blue and gold, the rookie McGowens performed as advertised. He led Pitt with 17 points in a blowout win over Youngstown State, frequently looking like the most physically gifted player on the floor. His highlight reel included the type of plays Panther fans became accustomed to seeing over the next two seasons — tenacious and-ones, acrobatic fast-break finishes and rim-rocking dunks.

Trey McGowens came to play in his first career college game! He had a team-high 1⃣7⃣points and helps get Jeff Capel his first W as head coach!#ZooEra (@Pitt_MBB, @jeffcapel, @Trey5mac_) pic.twitter.com/kOcHJvbP6K

Against VMI in Pitt’s next game, however, McGowens disappeared. He scored only four points on 2-8 shooting, including 0-4 shooting from 3-point range. Granted, his production wasn’t needed — the Panthers blew out the cupcake Keydets 94-55 and McGowens played just 16 minutes.

Those first two games of McGowens’ inaugural season came to serve as a microcosm for his entire two-year Pitt career. When in the zone and feeling aggressive, he could take games over through sheer willpower. But those sort of performances were often followed by several-game stretches where you’d be forgiven for forgetting McGowens was even on the floor, save for moments marked by recklessness or aimlessness.

At about the midway point of his debut season, McGowens looked like he had come into his own as one of the ACC’s most lethal young scorers — and Pitt’s potential savior. In the Panthers’ second ACC game against Louisville, he scored 33 points on 12-19 shooting from the field. Pitt won 89-86 in overtime, snapping an ACC losing streak that dated back to the 2016-17 season.

Two games later on Jan. 14, McGowens scored 30 points in a decisive 75-62 win over No. 11 Florida State. He channeled his inner James Harden, getting to the foul line an astonishing 19 times and knocking down 18 free throws. One of the nation’s best defenses had no answer for McGowens’ fast-paced, herky-jerky style of play.

The Florida State win gave Pitt a 12-5 overall and 2-2 ACC record, inspiring hope that the program’s rebuild was far ahead of schedule. At that point, McGowens was averaging 14.4 points and 6.7 free throw attempts per game. But that would prove to be his high-water mark.

After expressing a desire last offseason to improve his consistency, McGowens looked to be on track to do so early in the 2019-20 season. He scored double digits in all of Pitt’s first five games, and produced a three-game stretch early in ACC play of 24-, 18- and 24-point outings.

But in eerily similar fashion to 2018-19, McGowens turned into Pitt’s own Avatar after Jan. 14 — when the Panthers needed him most, he vanished. He never again surpassed 17 points, and finished the regular season on a seven-game streak of single-digit scoring that coincided with the team’s seven-game losing streak.

When I think back on McGowens’ time at Pitt, a few images will come to mind. I’ll picture his oddball takes to the hoop, off arm extended like a chicken wing at the nearest defender. More than anything, I’ll remember McGowens’ penchant for sticking his butt into the trailing defender in order to draw a foul. He always had a supernatural sense of when to slam on the brakes and draw this very niche type of foul — if it was a recorded stat, I imagine he’d be among the national leaders. Sam Young had his legendary shot fake, McGowens had … whatever you call this.

McGowens was at times delightful — and at others infuriating — to watch. He never did inspire much confidence when handling the ball, averaging 2.4 turnovers in his first year and 2.8 as a sophomore. He wasn’t a great shooter, with a jumper that often resembled more of a wishful heave than a calculated shot, yet he liked to shoot — a dangerous combination of traits. This past season, McGowens led Pitt with 132 3-pointers attempted despite ranking fifth on the team with a lackluster 31.1% success rate on such shots.

On the nights McGowens did have his mojo, there was nothing quite like it. He was a fast-break maven, grabbing an outlet pass or rebound and initiating a one-man offense. Whether charging full-steam into a one-on-four situation or chucking shots backward over his head, he had countless moments that made you go, “No, no … yes!”

McGowens’ most consistent contributions came on the defensive side of the ball, where he averaged 1.9 steals per game in each of his two seasons. Both years, that ranked fourth in the ACC.

Again, McGowens’ box-score statistics have little to do with the legacy he leaves at Pitt, which is that of a player who took a chance on a struggling program before anyone else did.

Some have cited homesickness, poor team chemistry or the emergence of primary scorers like Xavier Johnson and Justin Champagnie as reasons for McGowens’ departure. He ominously voiced his frustrations after Pitt’s final loss to NC State in the ACC Tournament, commenting that Pitt succeeded earlier in the season when “nobody had their own personal agendas” and “everybody was just together and just cared about winning.”

Whatever the case, McGowens was ultimately a poor fit with Johnson in the backcourt. Neither complemented the other, with both profiling as shooting-averse slashers. With Capel failing to surround the duo with capable shooters to provide greater spacing over the past two seasons, it became increasingly apparent that one would have to go. The behind-the-scenes emergence of transfer guard Ithiel Horton as a potential starter for next season may have been another factor in motivating McGowens to move on from Pitt.

McGowens remains a highly talented player who has already received interest from the likes of Georgia, Ole Miss, Nebraska, TCU and Wichita State. He’s shown a high ceiling, and a change in scenery — likely one closer to his native South Carolina — could unlock the sort of potential that never quite came to fruition at Pitt. Wherever McGowens goes, Panther fans should wish him the best — and be grateful that he ever spent two years at Pitt in the first place.