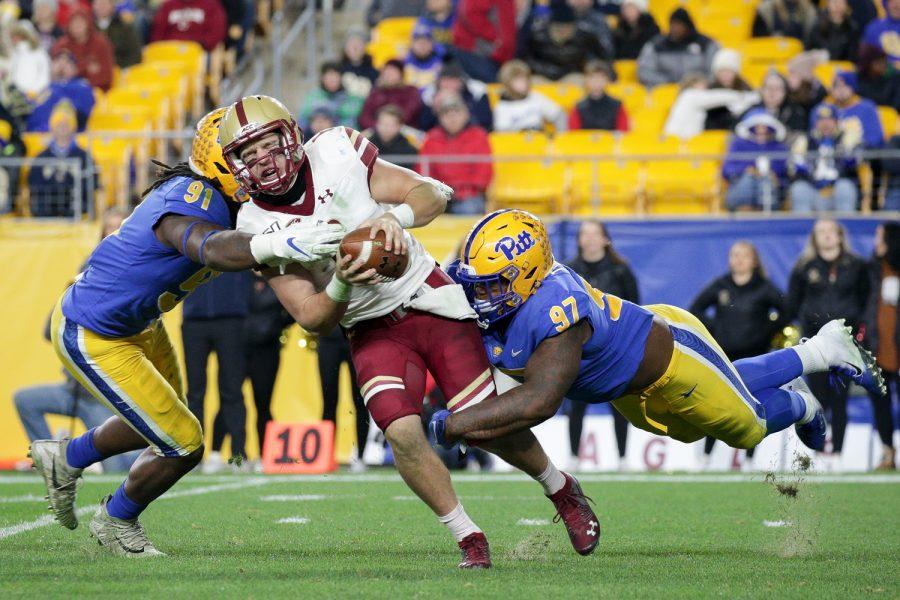 The 2019 Pitt football team boasted one of the best defensive lines in the nation. It ranked highly in the two metrics that typically define a front line — sacks per game (first with 3.92) and rushing yards allowed per game (12th with 108.5).

Yet in a Feb. 13 Bleacher Report article that ranked its top 10 defensive lines entering the 2020 season, Pitt was notably left off the list.

And it’s not like the article’s author, Brad Shepard, had a brain lapse and forgot the Panthers existed, because he specifically mentions them as one of the teams that just missed out on cracking the top 10. He looked at Pitt’s returning production and decided it wasn’t good enough.

When asked about the snub on Pitt’s first day of spring training, redshirt senior defensive end Rashad Weaver was all business — with a hint of sarcasm — in his response.

“I guess those top defensive lines have something we don’t, or they have some players we don’t,” he said. “I guess we’ll see in the fall when the pads come on.”

If Shepard is aware of some factor holding Pitt’s defensive line back from having another monster year, I’d love to know what it is. Because it’s lost on me.

The Panthers return nearly all of their defensive line production from last season and should only improve thanks to a combination of incoming recruits and previously injured starters returning to health.

Does that make Pitt’s front line a surefire top-five unit in college football? Perhaps not.

But top 10? Easily. The following exercise will break down just where the Panthers fit in among college football’s defensive line hierarchy.

The case for Pitt

Defensive tackle Jaylen Twyman had a breakthrough season in 2019, becoming Pitt’s first interior lineman to lead the team in sacks (10.5) since Aaron Donald in 2013. He also tied for first on the team with 12 tackles for loss, earning second team All-American and first team All-ACC honors. In Twyman, Pitt possesses the rare defensive anchor with the size (290 pounds) to clog running lanes and the agility to blow by blockers and chase down quarterbacks.

If Twyman is the Panthers’ superstar, then defensive end Patrick Jones II is their unsung hero. The rising redshirt senior was quietly dominant in his own right last season, leading the team with an incredible 18 quarterback hurries — 13 more than the next player — and four forced fumbles while also tallying 8.5 sacks and 12 tackles for loss.

Both Twyman and Jones II would have almost certainly been selected in the 2020 NFL Draft had they chosen to declare. They instead elected to return to Pitt and terrorize college opponents for another season.

With its top two performers coming back, Pitt has a distinct advantage over the country’s other top defensive lines, many of whom lost their best player to graduation or the draft. The Panthers only lose defensive tackle Amir Watts, who had seven tackles for loss and two sacks in 2019.

Pitt will also benefit from the return of two solid defensive ends — redshirt junior Deslin Alexandre (5.5 sacks, 10.5 tackles for loss) and redshirt sophomore Habakkuk Baldonado (four sacks, 5.5 tackles for loss) — who stepped up in 2019 and should provide great depth on the edge.

But the Panthers’ most important defensive lineman after Twyman and Jones II might be someone who didn’t even play a single snap last season — Rashad Weaver.

Weaver was Pitt’s best defensive player in 2018, leading the team in tackles for loss (14), sacks (6.5) and fumble recoveries (three). But his 2019 season was cut short before it even began after a torn ACL suffered in preseason training camp.

On Pitt’s first day of 2020 spring practice, Weaver participated in drills — albeit in limited fashion — and scoffed at the notion he wouldn’t be 100% ready by the Panthers’ first game. If we’re to take him at his word and he can return to the level at which he once played, then Weaver could provide another game-wrecking force to a unit that already thrived in his absence.

Rounding out Pitt’s 2020 defensive line is Dayon Hayes, the incoming hometown recruit out of Westinghouse High School. A four-star prospect, Hayes is far too talented to redshirt or merely play a few snaps here and there. The 6-foot-3, 250-pound defensive end racked up 23 sacks as a senior in high school, and should contribute immediately to a star-studded group of edge rushers.

The case for the competition

Now, there’s an outside argument to be made for Pitt’s defensive line as the best in college football entering the 2020 season. On paper, this unit has nowhere to trend but up. Assuming last year’s campaign was no fluke and Weaver returns fully healthy — and taking into account a more forgiving schedule — then Pitt could again lead the nation in sacks and improve even further upon its 12th-ranked run defense.

However, things rarely turn out how they seem on paper. And for the sake of being unbiased, I’ll make some concessions that err on the side of the field at large.

For starters, I’m not even going to argue against the first four teams on the list — Clemson, Alabama, Georgia and Ohio State. It doesn’t matter that Pitt is bringing back greater production than Clemson, or that Alabama ranked 44th in sacks and 37th in run defense in 2019, or that Ohio State is losing the best defensive end in college football last season, Chase Young.

None of that matters because these are perennial blue-blood programs that reload each season with the best talent available at every position group. They accounted for four of the top five 2020 recruiting classes, with Georgia ranked first. Clemson nabbed the two highest-rated defensive linemen in the class, defensive tackle Bryan Bresee and edge rusher Myles Murphy.

I won’t even argue that Pitt has a better group than the No. 5 team on the list, Miami. As overrated as the Hurricanes often are, their defensive line is legit. Redshirt sophomore Gregory Rosseau is back after a dominant 15.5-sack campaign. Miami also snagged the transfer portal’s best defensive player in edge rusher Quincy Roche, who recorded 13 sacks at Temple last season. Together, they constitute the nation’s most productive returning defensive end duo.

Florida and Oregon also earned their spots on this list, adding to and retaining much of last year’s units who both cracked the top 20 in both run defense and sacks.

But No. 8 is where I draw the line, because you absolutely cannot convince me that Penn State has a better defensive line than Pitt.

Sure, the Nittany Lions had a dominant unit up front in 2019, ranking fifth in run defense and seventh in sacks. But they’re losing their best defensive end, Yetur Gross-Metos, and defensive tackle, Robert Windsor. Their most productive returnees, Shaka Toney and Jayson Oweh, combined for 11.5 sacks and 13 tackles for loss last season, which is just one more in each category than Twyman alone contributed.

As for the remaining two teams on Bleacher Report’s list, Utah is losing its top two defensive tackles in addition to star defensive end Bradlee Anae. Wisconsin, like Pitt, will bring back all of its core defensive line production from last year’s team that ranked fifth in sacks and sixth and run defense. But those numbers had more to do with the play of linebackers Zack Baun (12.5 sacks) and Chris Orr (11.5 sacks) than anyone on the Badgers’ front line. Pitt still has a better case than either team.

And so, ladies and gentlemen, there you have it. If Pitt’s defensive line can maintain the momentum it started in 2019, then it will be, at the very least, among the eight or so best groups in college football — that is, assuming the season is played at all.