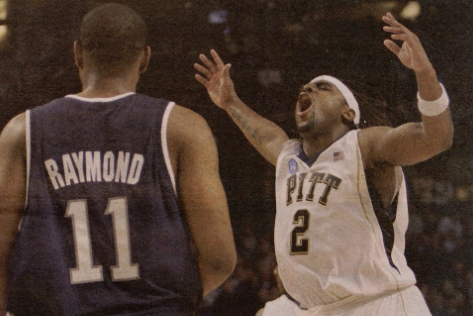 Photo from the Pitt News Archives

Today’s date, March 26, holds a special place in the collective memory of Pitt basketball fans. Exactly 11 years ago today, the Panthers secured their only Elite 8 appearance in modern tournament history thanks to a clutch performance from a program legend.

With under two minutes to play in its Sweet 16 matchup of the 2009 NCAA Men’s Basketball Tournament, Pitt faced a familiar fate — postseason disappointment.

The Panthers earned their first No. 1 seed in school history that season, and it appeared to be the year they could finally break through. An elite program for the better part of the 64-team tournament era which began in 1985, Pitt had yet to advance past the Sweet 16. In fact, the Panthers earned a distinct reputation of falling short in the postseason throughout the years. A meeting with the No. 4 seed Xavier Musketeers, who were led by head coach and former Pitt great Sean Miller, gave them another chance to exorcise their Sweet 16 demons.

Pitt’s lineup featured two of the country’s premier players in sophomore big man DeJuan Blair and senior forward Sam Young. But elite, pro-level talent was not lacking on Pitt’s previous teams who made early exits. The 1988 Panthers squad was knocked off in just the second round of the Big Dance, despite earning a No. 2 seed thanks to a frontcourt of school legends Charles Smith and Jerome Lane.

With just about six minutes left to play, the Musketeers led the Panthers by a single point, 47-46. In a close, hard-fought game, a March hero would have to emerge for one of the sides to make the difference.

Unlike many memorable college players, Fields did not boast eye-catching scoring statistics, or routinely perform flashy dunks and passes. Rather, the Brooklyn native built his game on toughness, intelligence, heart and leadership. In the 2008-09 season, Pitt’s floor general averaged 7.5 assists per game and an assist-to-turnover ratio of 3.25, both of which were good for third best in the country.

Aside from his excellent facilitation, decision-making and ball security, Fields averaged a solid 10.7 points per game. But his scoring ability often became much more apparent in the final seconds of games.

Pitt quickly scored six unanswered points, with the last two coming in unconventional fashion. With just under five minutes left, junior guard Jermaine Dixon swiped an Xavier pass and rose up for a fast-break dunk. But he didn’t quite have enough air to finish, and missed an awkward layup attempt.

Fortunately for Dixon, Fields quickly swooped in to grab the rebound and the two points, and immediately motioned his teammate to get back on defense. Unfortunately for the Panthers, Dixon’s failure to score would be symbolic of their next few minutes offensively.

The Musketeers hit multiple outside shots down the stretch, while the Panthers suffered a scoring drought of nearly four minutes. Turnovers and missed looks had Pitt fans across the nation screaming at their TVs as Xavier notched a 54-52 lead with one minute left to play.

Fields would not allow the narrative of underperformance to continue. Just the previous year, he stood out as the driving force in Pitt’s Big East Tournament Championship, bringing the Panthers their first conference title of the Jamie Dixon era. Fast forward to March 26, 2009, and Fields was in a position to do something perhaps even more groundbreaking — get the Panthers to their first Elite 8.

After dribbling the ball off the foot of a hedging Xavier defender, Fields sprinted to recover the ball in the backcourt. With the shot clock winding down, Pitt’s leader took the game into his own hands. Fields controlled his motion, crossed the ball between his legs and knocked down a 3-point jumper in the face of his defender with 51 seconds remaining to give Pitt the lead once again.

Late in the ensuing Xavier possession, Fields stole the ball from guard B.J. Raymond and finished on the fast break, giving his Panthers a 57-54 lead and essentially putting the game away. Behind its point guard and captain, Pitt reached its first Elite 8 of the modern tournament era.

Many great guards have played for Pitt, and players like Sean Miller, Brandin Knight and Julius Page boast similar statistical contributions and team accomplishments to Fields. But no player in Panthers history displayed the leadership qualities and late-game closing ability that Fields possessed. His performance 11 years ago cemented the fact that he was not just another great player, but a Pitt legend.

Pitt’s other stars performed exceptionally against Xavier. Young scored 19 points and Blair scored 10 points to go along with 17 rebounds. Their performances helped Pitt get within striking distance, but the game was determined by the events that occurred in the final minute of play.

Like so many other games from 2005 to 2009, one simple fact determined the outcome in crunch time — Pitt had Levance Fields, and the other team did not.

And because of his performance on this day 11 years ago, another fact became clear — Fields is the greatest guard in Pitt history.