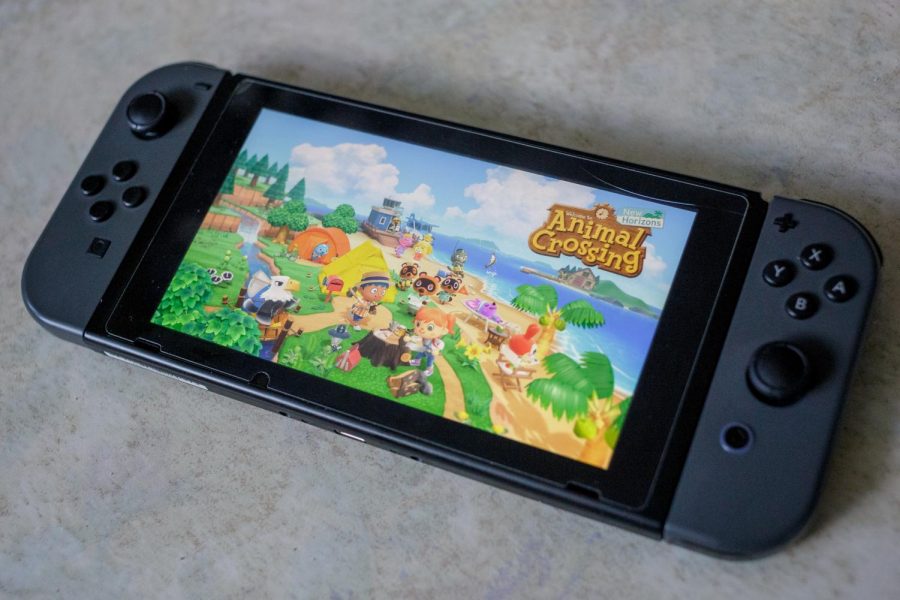 Ashley Martin is spending the next few weeks fishing, collecting bugs and doing chores for her neighbors. This might turn a few heads, since several counties in the state have issued shelter-in-place orders due to the coronavirus pandemic.

But Martin’s not even stepping outside.

Martin, an undecided first year, is one of thousands of fans of the hit Nintendo video game series “Animal Crossing.” Last Friday, Nintendo released “New Horizons,” its next highly anticipated title that has captured the attention of thousands of college students who are playing it while socially distancing and in quarantine. In it, players spend their days building up a small island community from a deserted, weed-filled wasteland to a thriving little tropic metropolis.

Martin said for her, this kind of monotonous style of gaming — much of the player’s time spent in “New Horizons” is gathering materials and creepy crawlies to win achievements for their town, of which the player is sometimes mayor — really provides stress relief for her and other players.

“It’s so fun just to get all these different achievements to build up your town, your village. It’s like a little world outside of the real world and you get to make it whatever you want without stress,” she said.

The video game’s last release was in 2012 with “Animal Crossing: New Leaf” on the Nintendo 3DS console. Martin said it’s been a long time coming for fans of the franchise and that she couldn’t contain her excitement when Nintendo announced the game.

“I saw the announcement that ‘Animal Crossing’ was coming to the Switch. And so I was like ‘Oh my god I have to get a Switch now’ just because I was so excited for ‘Animal Crossing,’” she said.

Lindsay Kirschner, a first-year psychology major, said for her, the release of “New Horizons” was like a “sorry” from Nintendo after their release of “Amiibo Festival” and “Pocket Camp,” two poorly received “Animal Crossing” spin-offs in 2015 and 2017, whose gameplay completely deviated from the tried-and-true formula of the real-time day-and-night cycles and town interaction fans have come to love.

“I feel like ever since ‘Welcome Amiibo’ everything else has been a letdown. ‘Amiibo Festival’ and ‘Pocket Camp’ were just so sad. So we actually have a good game for once and I think that’s why everyone’s excited,” she said.

Cameron Rider, a sophomore music major at the Carleton University in Ottawa, Canada, said another reason fans were so excited was because in previous games, players eventually ran out of things to do. Much of “Animal Crossing” consists of the player decorating and designing their town, which dried up quickly in “New Leaf.” So the added design features for clothes and objects in “New Horizons” had everyone spinning.

“There’s only so much you can do in the [older] game after a while,” she said. “Every little thing we were told would be in the game was posted everywhere for days. Something as small as mug customizations made everyone freak out.”

In “Animal Crossing: New Leaf,” the lack of customizations got so boring that Martin said players hacked their DS by modifying elements of their SD card to customize the game. These modifications allowed players to add more personality and flare to their towns by adding more decorations and patterns to further customize the game. Martin said she believes that when Nintendo saw this happening, it added in more customizable features to fix the issue.

“People would actually hack the DS to be able to customize it however they wanted,” she said. “This game is so different, though, because everything that they were hacking before already exists in the game.”

Unlike past iterations of the game, where the player is elected mayor of an already established town, in “New Horizons,” they are the resident representative of a deserted island. Players then have to build their island into a thriving hub of activity from the ground up, one weed at a time.

To facilitate this building, “New Horizons” features a brand-new crafting system that requires the player to gather raw materials. Martin said that it’s this system and the new terraforming feature where you can change the physical landscape of your island that has her most excited to play.

“For the first time in any ‘Animal Crossing’ release you get to customize where the buildings are gonna be, you just get to make it truly whatever you want to be, and a new tool called terraforming, where you get to make your own landscape, new hills, new rivers, anything really,” she said.

The game has a reputation for being peaceful, especially because of the real-time feature that forces players to take their time with their building, fishing and collecting. According to Kirschner, the peaceful nature of the game brings out a friendly nature in people, which is needed nowadays for college students under stress.

Kirschner said the experience reminds her of Katsuya Eguchi, the original creator of “Animal Crossing,” who created the game because he felt lonely many years ago on a business trip.

“He made it because he was going on a business trip and he felt really lonely. So he made this game to kind of have an inside world where he had people to constantly talk to and interact with,” she said. “Everyone’s inside their houses practicing isolation and all that, so it’s nice to finally have somewhere to go and talk to people and have fun.”

Savannah Houck, a first-year environmental science major, said she sees how Eguchi took his loneliness and created the “Animal Crossing” characters. Though, she said, she also enjoys being able to visit other players’ islands — a feature that allows her to interact with her real life friends in the game.

“I like to interact with the characters because they always say goofy things, but it’s also cool to see how your friends’ towns come to look,” she said.

Rider said she finds it kind of strange to be playing a relaxing kind of game while the world outside of everyone’s touch screens is falling apart. But it’s also providing some much-needed escapism for people who can focus on helping their virtual town, rather than the stress of real life.

“My Twitter feed alone has been filled with nothing but talks about the virus and people’s fear and anger. Now those same people are posting about their towns and sharing friend codes so we can all visit each other,” she said.

“New Horizons” has become a sensation. It’s the fastest-selling Switch game ever in Japan and has made more sales in its first week in the U.K. than all other “Animal Crossing” games combined. Houck said she believes this popularity is due to the lack of control people are experiencing in their lives due to the coronavirus outbreak. To Houck, “Animal Crossing” gives people the chance to take back some control and put energy into creating something beautiful.

“Everything is so hectic in the world right now with corona, and other issues too. When everything feels like it’s out of your control, it’s just nice to play a calm game where you chill and collect butterflies,” she said.