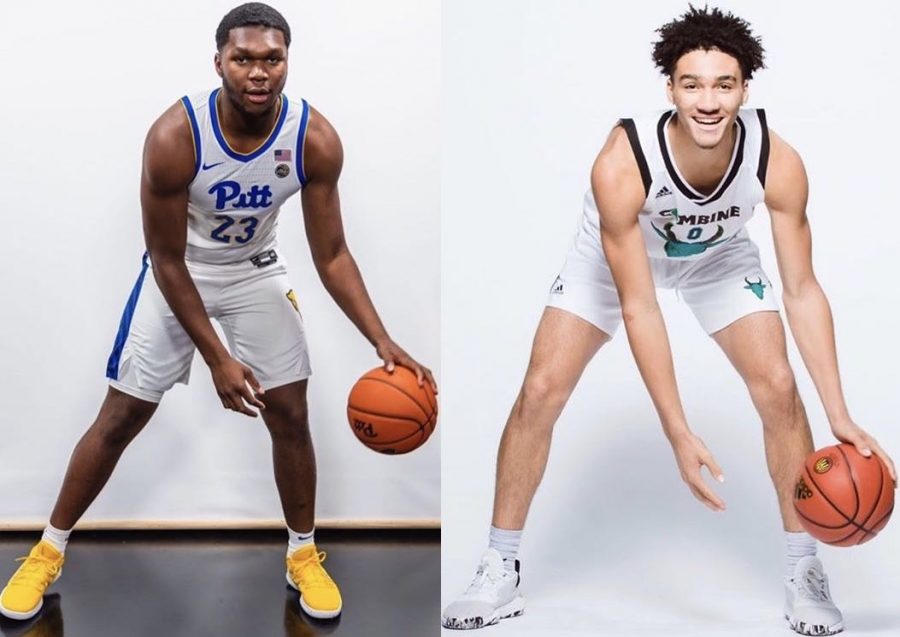 John Hugley (left) and Jalen Hood-Schifino (right) both hold four-star rankings and are currently committed to Pitt basketball's class of 2020 and class of 2022, respectively.

For the past four seasons, Pitt men’s basketball has been disappointing.

And they’ve been disappointing in an entirely new, worse way than seasons past. At least during the 13-year Jamie Dixon era, they let fans down in a “Shoot, we lost to a lesser team in the NCAA Tournament for the fifth straight season” type of way. Now, that disappointment has shifted to the “I thought we might win one ACC game this season but I guess not” or “I told everyone I know that Pitt would return to glory this year and now I look dumb” variety.

With zero tournament appearances — or winning seasons — over the past four years, once-ungrateful Pitt fans would now give anything to see their beloved Panthers get trounced in the Round of 32 one last time, because at least that would mean they made it to the postseason at all.

So, how soon can we expect to see Pitt back in the Big Dance?

The answer — very soon, thanks to a pair of stud prospects coming up through the Pitt pipeline.

Help on the horizon

But the point of this article is to iterate just how special these two players are. Both possess the sort of polished, game-changing talent that Pitt hasn’t seen in years. Each alone is capable of elevating a program to its next level. Together, they would single-handedly — well, I guess double-handedly — catapult the Panthers back into national relevancy.

Note the use of the word “would,” however, as all of this is still very theoretical. Hugley will certainly be at Pitt next season. As for Hood-Schifino, he did give head coach Jeff Capel a verbal commitment. But Pitt fans know to be skeptical of promises made with so much time left in one’s high school career. Multi-sport maven Terrelle Pryor once verbally committed to Pitt basketball as a sophomore at Jeannette, and … well, you don’t hear us talking about Pitt basketball legend Terrelle Pryor.

Let’s just hope that Hood-Schifino doesn’t pick up the sport of football, and that no other schools lure him away from his commitment to the Panthers.

There’s a slight possibility Hood-Schifino decides to reclassify to the Class of 2021 as former Panther Trey McGowens once did. That would mean, assuming Hugley isn’t so talented that he leaves for the NBA after one season, the two would start playing together in the 2021-22 season. In this best case scenario, they might spend two years together before one would likely leave to go pro.

As it currently stands, Hood-Schifino will join Pitt in 2022-23. Now, the Panthers will have an outside chance of returning to the Tournament as soon as next season, and an even better chance the next season. But if they somehow miss out in both years — and if either Hugley or Justin Champagnie is still around as a junior and senior, respectively — then the 2022-23 Panthers will finally boast a team capable of making a deep postseason run.

Pitt hasn’t had a truly great big man since DeJuan Blair, who as a sophomore in 2008-09 averaged 15.7 points and 12.3 rebounds before going to the NBA. Since then, the Panthers have mostly lacked a dominant post presence who can score and rebound at a high level.

Not many players boast the physical profile of Blair, who at 6-foot-7, 260 pounds was so wide that he naturally took space away from would-be rebounders and could drop-step around defenders like they didn’t exist.

Hugley’s no Blair — almost no one is — but he’s a hefty lad in his own right. The 6-foot-9, 240-pound center averaged 24 points, 13.3 rebounds and 4.6 assists per game as a senior at Brush High School just outside of Cleveland. Throughout the season, Hugley displayed a blend of physical dominance and tactical skill that will make him an instant contributor at Pitt.

Hugley’s game starts with what he can do in the paint. With an array of post moves, he’s the type of player who can catch an entry pass down low and create his own offense. He boasts a great back-to-the-basket game, and can quickly drop-step either way to get around his defender and finish through contact or draw a foul.

But Hugley’s skill set isn’t completely reliant on bully ball. Like the ideal modern big man, he can step out beyond the 3-point arc, where he’s shown a soft shot with solid efficiency.

And when the defense collapses to double team, Hugley has the poise to keep his head up and locate the open man. Those 4.6 assists from the center position are nothing to scoff at.

Oh, and he also plays with some attitude. Tell your grandpa to shield his eyes.

Granted, these clips show Hugley dominating against high-schoolers that are almost always far smaller than him. He won’t be able to just waltz into the ACC and have the same sort of production against some of the best big men in the nation. But these highlights show the type of intangibles that Hugley possesses. It doesn’t matter who he’s going against — remember, some were even skeptical of Zion Williamson coming out of high school because of all the videos that showed him dunking on what appeared to be middle schoolers. With his well-rounded skill set, Hugley’s game should inevitably translate to the next level.

If Hugley does have a weakness, it’s that he often spends so much energy on offense that he gets caught taking a breather on defense. There are times when he should slide over to play help defense and protect the basket, but is instead nowhere to be found.

Aside from that, Hugley — who is considered by 247 Sports to be the No. 14 center in his class — has the potential to give the Panthers an anchor they’ve lacked since Blair’s departure.

In watching Hood-Schifino’s film, it occurred to me that he’s not quite comparable to any guard the Panthers have ever had. If his No. 29 class ranking holds, he’ll be the highest-rated guard Pitt has ever recruited. As a sophomore at North Carolina’s Combine Academy, he averaged 15.6 points, 6 assists and 3.9 rebounds per game.

I found myself coming back to one player comparison for Hood-Schifino — former UCLA star and now New Orleans Pelicans point guard Lonzo Ball.

Obviously, Hood-Schifino doesn’t have the same sort of fanfare as Ball, who was ranked the No. 3 prospect in his class and led one of the nation’s top high school teams. But think of Hood-Schifino as Lonzo Ball lite, with the same type of skill set as the now professional point guard.

Like Ball, Hood-Schifino is a pass-first player. Call it poise, high basketball IQ or whatever basketball cliche you’d like — Hood-Schifino has it. He’s constantly aware of his surroundings and does an outstanding job of using his eyes to manipulate defenders.

Basically, Hood-Schifino is exactly the type of player Pitt could use right now. For all his contributions, current point guard Xavier Johnson has been plagued by a tendency to turn the ball over and put the blinders on when plays fall apart. Hood-Schifino, on the other hand, never seems to be in a hurry. He makes great decisions with the ball in his hands and has a knack for getting to his desired spot.

It helps that Hood-Schifino is longer and stronger than most players at his position, allowing him to score at all three levels. He can finish through contact in the paint and get buckets in the mid-range thanks to a soft floater and controlled pull-up jumper:

Hood-Schifino also has a solid 3-point shot, as well as the size to guard positions 1-4 and disrupt opponents around the rim.

There are essentially no glaring holes in Hood-Schifino’s game, and he’s only a sophomore. His potential is scary, and the thought of him teaming up with Hugley at Pitt is downright salivating. If it does happen, Pitt fans can again look forward to seeing the Panthers compete come tourney time.