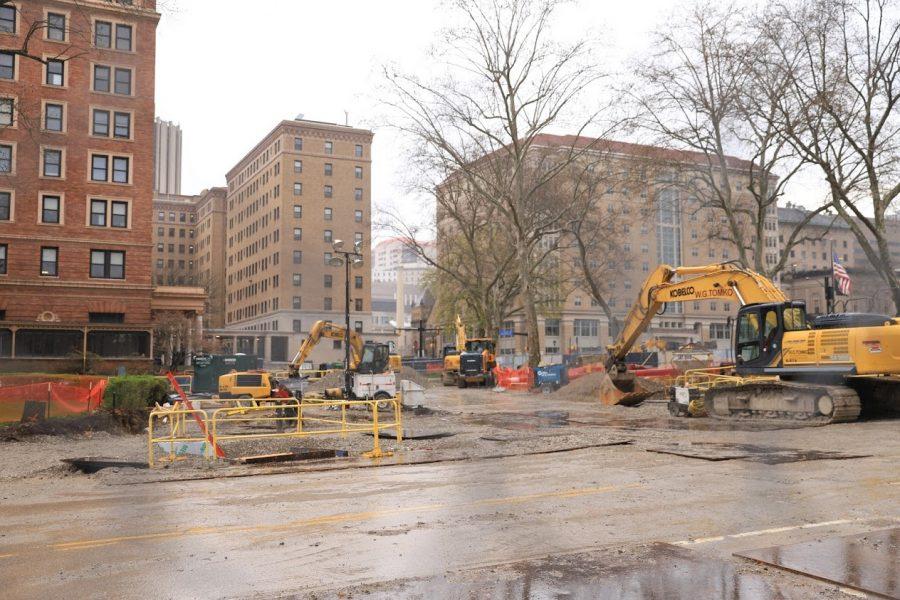 As businesses shutter across Pennsylvania in the midst of the COVID-19 pandemic, the roaring sounds of construction normally heard across Pitt have gone silent as well.

The $23.7-million project was set to be completed by August 2020 before Welcome Week for incoming first-year students. Financed by Pitt in partnership with the commonwealth and the City, the project finished its first phase in mid-December, which focused largely on the installation of utility lines under Bigelow and boring of utility lines under Forbes and Fifth avenues. The second phase, which was previously scheduled to be completed in June, included improvements to Bigelow and William Pitt Union’s grounds. The third and final phase of the project was slated to finish in August.

The $250-million renovation of Pitt’s athletic facilities, called the “Victory Heights” project, includes a new 3,500-seat arena, an eight-lane and 300-meter indoor track, multiple practice buildings, a band facility and a strength and conditioning complex. Pitt slated construction of the new arena to begin in summer 2021 with an intended fall 2023 opening. The indoor track and bank complex was on track to open one year later.

A $16.5-million renovation to the Peterson Sports Complex is also underway, which includes adding a third floor and expanding the first and second floor. It will also expand locker rooms, restrooms, training facilities as well as nutrition and sports medicine buildings.

The library’s third floor was originally set to open this spring, before students went on summer break. The University Library System had a five-year plan to close and remodel one floor per year. The fourth floor reopened in fall 2018. Pitt planned to remodel the second floor after the third floor opened, followed by the first and ground floors.

The first phase of the $120-million project was projected to be completed in December 2021. The renovations to Scaife Hall, which houses the School of Medicine, include construction of a 600-seat lecture auditorium, new classrooms and a new gross anatomy laboratory.

The Campus Master Plan, a 20 to 30 year road map for the future layout of Pitt, included $69-million renovations for the fourth through 11th floors of Salk Hall, which currently house the schools of Pharmacy and Dental Medicine. The renovations began in October 2018.

These projects include replacing outdated utilities like power and sewer lines along University Drive, as well as adding more pedestrian walkways. The repairs are precursors to beginning construction on a new recreation and wellness center on the current site of the Learning Research and Development Center and the O’Hara Garage. The center is currently scheduled to open in fall 2022.

This $8-million renovation project was on track for completion in March. The project included a new entrance to the School of Education and a new floor design.