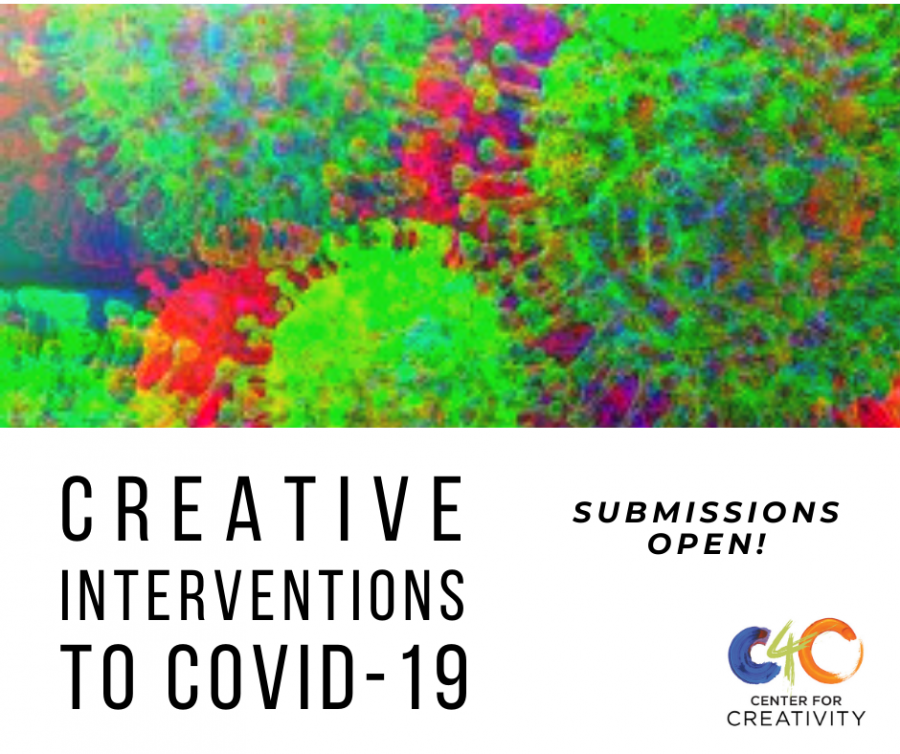 Members of the Pitt community are invited to submit art from any medium designed as a creative response to the public health discussions surrounding the COVID-19 pandemic. Image via Center for Creativity.

When most people think of informative art about the Coronavirus pandemic, they might think of funny comics seen on Twitter or of how many times they have to sing “Happy Birthday” to practice best hand-washing techniques.

Pitt’s Center for Creativity organized the Creative Innovations to COVID-19 contest to change that. The contest calls for members of the Pitt community to flex their creative muscles to educate others on the virus, and is accepting submissions until this Friday, April 10.

The Center planned the contest before the University announced on March 11 that classes would be held online indefinitely. But the move to online classes and closure of University buildings hasn’t stopped the contest from carrying on.

According to Erik Shuckers, the Center’s manager of communications and programming, the staff originally hoped to receive sculpture and 3D art submissions to display in a gallery. Instead, the digital submissions will still be displayed on the Center’s website. With the move to a digital contest, all types of submissions are still welcome, though Schuckers said most of the submissions so far are of visual art.

“We haven’t seen anything by the way of music yet, or performative art, which I would love to see if people are into that,” he said.

The idea for the contest came from a collaborative effort between the staff of the Center for Creativity and was partially inspired by Schuckers’ experience watching the influence of art during the HIV/AIDS crisis in the late ’80s and early ’90s.

“There are ways to use creativity to intervene in and possibly change the course of conversations around illnesses,” he said. “More recently there were interventions like a popular song that was done to intervene in the Ebola crisis in Liberia.”

The Creative Innovations to COVID-19 is not the only digital work the Center for Creativity has produced during the University closure. In addition to a series of blogs in collaboration with The Pitt News, the Center has also begun its own series of blogs on its new website, and a podcast is in the works.

The Center is also hosting open mic nights, the next of which takes place this Thursday via Zoom. In addition to writing and art workshops also held on Zoom, the Center staff is creating digital tutorials, such as one for cardboard lamps, for the YouTube channel.

Cardboard lamp tutorial from the Center for Creativity’s Youtube channel

Though the Creative Innovations to COVID-19 contest is open to all topics related to the coronavirus pandemic, such as hand-washing, Schuckers said most submissions have focused on encouraging social distancing.

“People are focusing right now on social distancing and ways to get the word out about that and make it popular and also to sort of mitigate the feeling of disconnectedness that that can create,” he said.

As for prizes, the entries are to be judged by the Center staff on creativity, accuracy and power of communication. Schuckers said the Center hasn’t quite decided what the creators of the winning entries of the contest will receive, but promises a prize.

“I’m hoping to work with the University Store to get some gift certificates,” he said. “We were kind of thrown for a loop with the prizes, with the closing and everything.”

Though the contest may not be a top priority for those worried about the state of the world, Schuckers and the staff at the Center for Creativity wanted to give people an outlet for their creativity to help support each other during uncertain times.

“We had this idea that there would be a way for people to use their creativity to help shape and influence the conversations around issues, not just of health and wellness, but of social distancing and of all the sort of things that are associated with what we see now,” he said.

Submissions to the Creative Innovations to COVID-19 contest can be emailed to [email protected] by Friday, April 10, at 5 p.m.