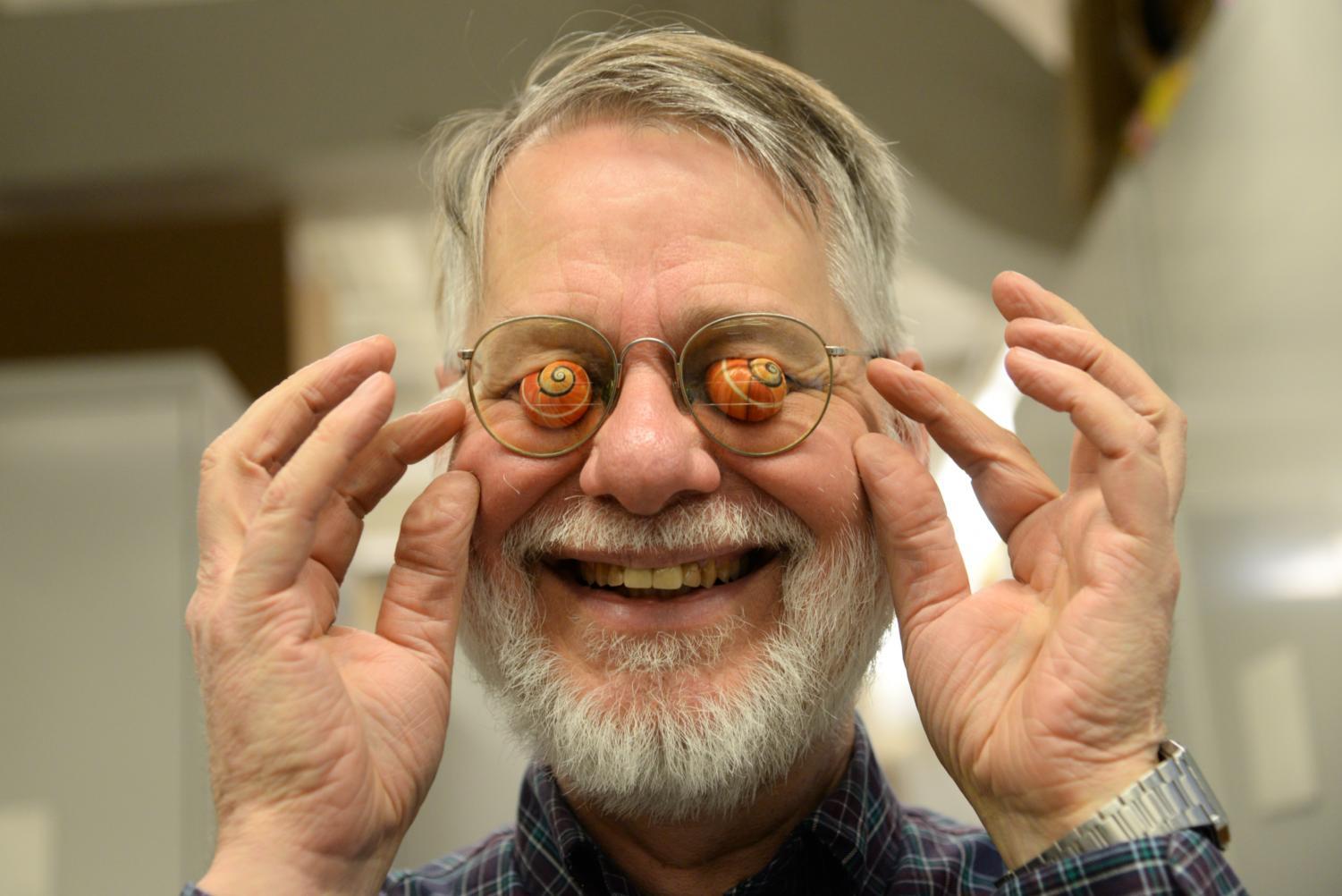 Musical performers gather among rows of snail shells each week with their guitars, violins, banjos and other instruments in tow. They’re resourceful, using props around the office to aid in the performance, like outfitting an old rolling cart labeled “Section of Mollusks” as a keyboard stand.

It’s the weekly live Irish jig concert in the Mollusks Collection at the Carnegie Museum of Natural History, and, like most weeks, they’re playing to an audience of none. The performers — CMNH employees across departments at the museum who participate for fun — call it Mollusk Music.

Tim Pearce is a fiddler in these concerts. As he stares at his feet, performing music from memory, he feels especially at home — they play in his office, after all. When he’s not organizing these concerts, Pearce — a married, soft-spoken 65-year-old man with graying hair and yellow-tinted trifocals — is the curator of the mollusks at the CMNH, just down the road from Pitt. The role requires him to care for and research the museum’s collection of more than 1.3 million mollusks.

“I guess I’m kind of a librarian,” Pearce said. “I want my collection to be available to researchers, so we need to catalogue them, make sure they’re accurate and put them on the Internet.”

Students who take advantage of their free access to the museum may see Pearce wandering around the halls of the museum — or if not there, then on TikTok, where he communicates his mollusk knowledge to more people than he ever would have expected. The CMNH made an account on the relatively new video-sharing platform to showcase his snail knowledge, and by almost any metric, his videos have gone viral.

In one of the more popular videos, Pearce, dressed in a green shirt, excitedly jests, “Barack Obama went to a costume party, and he was giving his wife a piggy-back ride. The host of the party said, ‘Welcome Mr. President! What are you dressed up as?’ Barack Obama said, ‘I’m a snail! That’s Michelle on my back.’” That video has more than 1.6 million views and 350,000 likes.

That joke has Tim’s pun trifecta — “Politics, snails and — at least at the right time of year — seasonally relevant,” Pearce said. But his favorite snail pun goes, “You cannot get escargot at McDonald’s, because burger joints only sell fast food.”

But the creation of TikToks is just a part-time hobby for him. His main role as curator of the mollusks — a phylum of animals that encompasses a wide variety of species, ranging from squids to clams to snails — takes up most of his time.

While Pearce cares about all mollusks, he’s known to his coworkers most as the “snail guy” — something that’s apparent as soon as you walk into his office, which is really more of a meticulously organized storage room with more than 15 rows, each 25 feet long, of ceiling-high cabinets filled with more than 30 pull-out shelves with hundreds of snail shells in each.

But the enormity of the collection doesn’t faze him. He walks briskly through the narrow aisles, pulling out trays of specimens and discussing in detail a particular shell — he has a story or a joke for nearly every single one. He gestures to a disorganized group of snail shells, remarking, “Look at them! They’re having a shell-ebration.”

This type of snail organization has been part of Pearce’s life for as long as he can remember. He started collecting snails when he was three years old in his hometown of Honolulu. He’d bring them into the doctor’s office, something the nurses hated but his doctor loved, so he kept doing it. His career path was set from there — he even started identifying snails in elementary school.

“I did find a land snail but I was using a sea snail guide book,” Pearce said, pacing around his office. “This is the land snail that I found,” he said, pulling out a “really, really beautiful” shell and describing the different features that distinguished it from a sea snail. “So anyway, I was pretty far off.”

After jumping around the country for his undergraduate and graduate studies, he eventually settled in Pittsburgh, where he’s worked at the CMNH since 2002. But he doesn’t just identify snails — he researches them too. His research is mostly focused on the distributions of different land snails in Pennsylvania and how they’ve changed over time. Scientists used to think the Punctum minutissimum — literally the “very small spot,” owing to it being about 1 millimeter in diameter — was only in 13 counties in Pennsylvania, but since 2002, Pearce has collected leaf litter samples with many of these snails in each of the commonwealth’s 67 counties.

“It looked kind of like it was rare, but it’s the most common snail in Pennsylvania!” Pearce said.

Looking for snails where others have missed them is a common theme of Pearce’s research. If you’re not looking for them, snails are easy to miss. When you’re looking at an old snail distribution map, it’s possible the creator missed some as they scoured an area for living specimens. Pearce said he sees this in some distribution maps with a huge variation over the last couple of decades.

“If you start here in 2001, there’s a lot of snails known around Pittsburgh and around Philadelphia, two [cities with] museums where people have been studying land snails for over a hundred years,” Pearce said. “So you can see, snails are attracted to people who study them.”

He’s personally found hundreds of species throughout Pennsylvania, adding to the body of scientific knowledge about snail distribution.

“Snails are so poorly known!” Pearce exclaimed. “I have found — I thought it was thousands, but I actually counted and it was only hundreds — of new county records [of snails].”

But snail collecting is really more of a hobby for him. “Don’t tell my boss — I get paid to do what I love,” he whispers. When he’s asked if he’s traveling for work — read: for snails — or for pleasure, he responds, “What’s the difference?”

“One of my hidden agendas is to get snails as popular as football,” Pearce said.

And by some metrics, he’s succeeded in this agenda. The museum’s TikTok account collectively gained more than one million likes on its videos, compared to the Steelers’ 950,000, largely thanks to videos of Pearce telling his signature snail puns.

“They just started putting the videos on there and boom! They started getting really popular,” Pearce said.

Tim Evans, the multimedia manager at CMNH, and Erin Southerland, a copy writer for the museum, both work with Pearce to make his jokes Internet-famous. They said the project started naturally when they realized how funny Pearce is.

“Tim just tells those jokes all the time. We’ve made other videos with Tim that are more educational videos where he’s explaining the subject, and he would just occasionally slip the jokes in,” Evans said.

In other words, TikTok’s short video format was perfect for Pearce’s small sound bites. Southerland said she hopes it results in concrete increases in museum attendance.

“Tim runs a behind-the-scenes tour roughly once a month, and we’re hoping that attendance goes up when we open again,” Southerland said in an email.

But that’s not the point of the project — it’s a place to showcase the cool people who work at the museum, like Pearce’s snail jokes or a botanist who mounts flowers onto a canvas.

“We really want TikTok specifically to be a place where everybody can see how much fun we have here,” Southerland said.

He’s gained sort of a cult following, too. In a Feb. 14 video, an unnamed high schooler used Pearce’s snail jokes to ask his date to prom. And the account’s followers received the video well.

“Tim will you be my valentine,” one user commented. “tim i have no snail jokes up my sleeve but i love you,” said another. “I LOVE YOU TIM HAPPY VALEBTINES,” a third replied.

The popularity of the TikToks delights him, but the supportive comments make his day — and sometimes give him an idea for another joke.