In the shadow of The Mecca: Reflecting on the Pitt-NY basketball pipeline 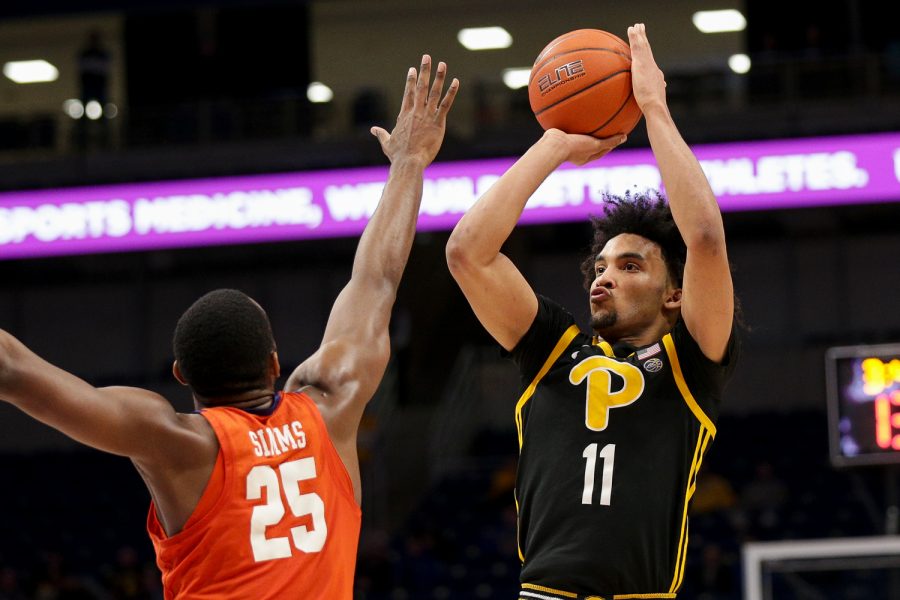 First-year forward and Brooklyn native Justin Champagnie (11) was the leading scorer during Pitt’s 2019-20 season with 12.7 points per game.

During the heyday of Pitt men’s basketball in the Big East conference — the period in which former head coach Jamie Dixon’s teams appeared in eight straight NCAA Tournaments between 2004 and 2011 — nearly every borough of New York City was represented on the Panthers’ roster.

McAlarney ended up at then-Big East, now-ACC rival Notre Dame, but Rohrssen, Dixon and the rest of the coaching staff would not be deterred.

That’s without factoring in some of the program’s major contributors from the greater NYC area such as Mt. Vernon, New York, native Keith Benjamin; Scotch Plains, New Jersey, native Ashton Gibbs; Nanuet, New York, native Tyrell Biggs, and All-American guard-turned former assistant coach Brandin Knight. Knight, a product of East Orange, New Jersey, and now an assistant coach on Steve Pikiell’s Rutgers staff, is one of four former Panthers to have their jersey hang from the rafter above the Petersen Events Center court.

But between Brooklyn-ite Derrick Randall’s graduation in 2015 and first-year wing Justin Champagnie’s debut off the bench in the 2019 opener against Florida State, no player from the area that once formed the core of Pitt’s greatest rosters came through the program. The sharp drop-off coincided with a fundamental shift in Pitt’s recruiting footprint following the program’s realignment from the Big East, which featured competition in the northeast with schools like St. John’s, Syracuse and Connecticut, to its current position in the Atlantic Coast Conference.

It wasn’t that the Panthers’ coaches stopped trying to bring in players from the area. They just lost out on their best recruiting tool.

Manhattan’s Madison Square Garden’s nickname, The Mecca, speaks to the religious reverence it inspires among sports fans around the world, particularly those raised in its shadow throughout the greater New York area.

There is no better host for what was once late February and early March’s most appointment of viewings — the Big East Conference Tournament. Like many former Big East programs and players, the Garden will always hold a special place in the heart of Pitt basketball. Panther fans will also be haunted by the torturous nightmares of so many failures in the tournament’s biggest game, as well as being on the wrong end of iconic moments such as Cardiac Kemba’s step-back game winner.

But beyond the tournament itself, the yearly opportunity to take the stage at the Garden gave Pitt something else — a powerful tool for recruiting those players who coveted the opportunity to perform in front of a sold-out Garden crowd.

Ramon, the Bronx-born guard who played at Pitt from 2004-2008 and currently serves as assistant director of operations under coach Jeff Capel, felt the pull of the Garden when deciding to embark on his college career at Pitt.

In the years before the former Dominican national player arrived on Pitt’s campus in 2004, the Panthers had emerged as a Big East powerhouse. Pitt had been to the finals of the conference tournament four years in a row, including cutting down the nets as champions in March of 2003 in the first year under Dixon after Ben Howland was hired away by UCLA.

“I was being caught in this, the Mecca of basketball. For all New York kids, you want to play at the Garden,” Ramon said. “Knowing that you were going to play the tournament … it was a selling point.”

The Panthers’ success in the tournament continued, returning to the championship in 2004 before losing on their first day of play to Villanova the next year. Four more tournament finals appearances followed, including another title in Ramon’s senior season.

“There was certainly a presence felt by the Pitt Panther basketball program in the city of New York, and a lot of success playing in Madison Square Garden,” Rohrssen said.

Rohrssen, known cooly as Slice — a moniker bestowed upon him by legendary high school scout Howard Garfinkel — along with a lead recruiter in his two different stints on the bench under both Howland and Dixon, had departed for a head coaching gig of his own at Manhattan by the time Pitt finally broke through in the championship game again in 2008. He recalled one of his favorite moments from his time at Pitt, a conversation with Pittsburgh legend and former broadcaster Dick Groat prior to the 2003 final.

“We were coming in the building and he looked at me, this is a guy that’s accomplished so much in his athletic career, and he was so happy,” Rohrssen said. “He goes, ‘You understand how excited I am to get to be able to walk into this building tonight and call a championship game?’ Wow. What a thrill.”

Champagnie doesn’t recall quite as much from the Big East days of his younger childhood as the long-time coach, but he did get filled in on the classic matchup between Pitt and St. John’s — where his twin brother Julian also excelled in his first season — by his father prior to his official visit at Pitt.

Champagnie’s breakout season, in which he cemented himself as an integral part of Capel’s regular starting five, has brought attention back to the historic link between New York players and Pitt basketball, and the dropoff that happened to coincide with a serious downturn for the program in general. The Bishop O’Loughlin product led the Panthers in both scoring and rebounding with 12.7 and 7.0 per game, respectively, as well as finishing third on the team in minutes with 32.9 per game.

That connection will emerge even more next season with roster additions that have ties to the New York region. Signee Max Amadasun is a native of Nigeria and attended school in Dublin, Ireland, but attended high school at Brooklyn’s Christ Our Savior Lutheran. Committed recruit Femi Odukale is a Brooklyn native as well. The guard from Springfield Commonwealth Academy in Springfield, Massachusetts, has not been able to sign his national letter of intent due to the NCAA’s COVID-19 recruiting freeze, but is expected to join the program in the fall.

Capel acknowledged the tradition of New York players in a statement released after Amadasun’s signing in November 2019.

“Max has the opportunity to be another outstanding Pitt Panther to come out [of] New York City,” he said.

Champagnie himself was excited by the prospect of more New York players in the locker room.

“It’s fun to play with people that you know when you were growing up,” he said. “I mean, if a couple more New York guys get that offer, I’ll definitely talk to them about that.”

Both Ramon and Rohrrsen emphasize that connection between players who grew up competing with or against each other in youth leagues or school conferences.

“The best recruiters in your program are your players,” Rohrrsen said. “They’re the ones that could actually speak to what’s going on there.”

Looking back on his own decision to journey from the Bronx to Pittsburgh, Ramon recalls seeing the success of other players from his area at Pitt and, of course, the opportunity to return and compete at a high level at the Garden each spring.

“[McCarroll, Krauser, Milligan and Taft] were already here. So you already have four guys from New York that had great success,” Ramon said. “Imagine you saying to yourself, well, I can relate to these guys, these guys have been there, they’ve had success there … It’s easier to commit to a school where you can see a correlation.”

But Howland, Dixon, Rohrssen and the entire staff built that correlation purposefully, building trust with potential recruits soothed by Slice’s familiar and distinct New York accent all the way through their arrival on campus and integration into a group of players they knew from back home.

The thrill of Pitt’s triumphs at the Garden faded with time as the program’s yearly visits came to an end. Following the move to the ACC, Pitt went from being guaranteed a return trip each spring, where the program had proven itself as a contender, as well as the regular season games occasionally played in the same building, to a league of unknowns where it has yet to prove itself as a big-time player.

Champagnie has been briefed on the history of tough, hard-nosed New York players to have played for the Panthers. But while he relishes the opportunity to continue that tradition, he’s more focused on following through with Capel’s vision for a resurgent program.

“[Coach Capel] sold me to come here, and make my city proud,” Champagnie said. “I just believed in what he had going on here and that I could change the program around.”

Despite the severance of Pitt’s link to the Garden, that historical connection still remains for those who built it and those who lived it.

“The connection is still there. The history that we have with New York guys, the history and success that all the New York guys had in this area is still part of us,” Ramon said. “It’s not going anywhere.”