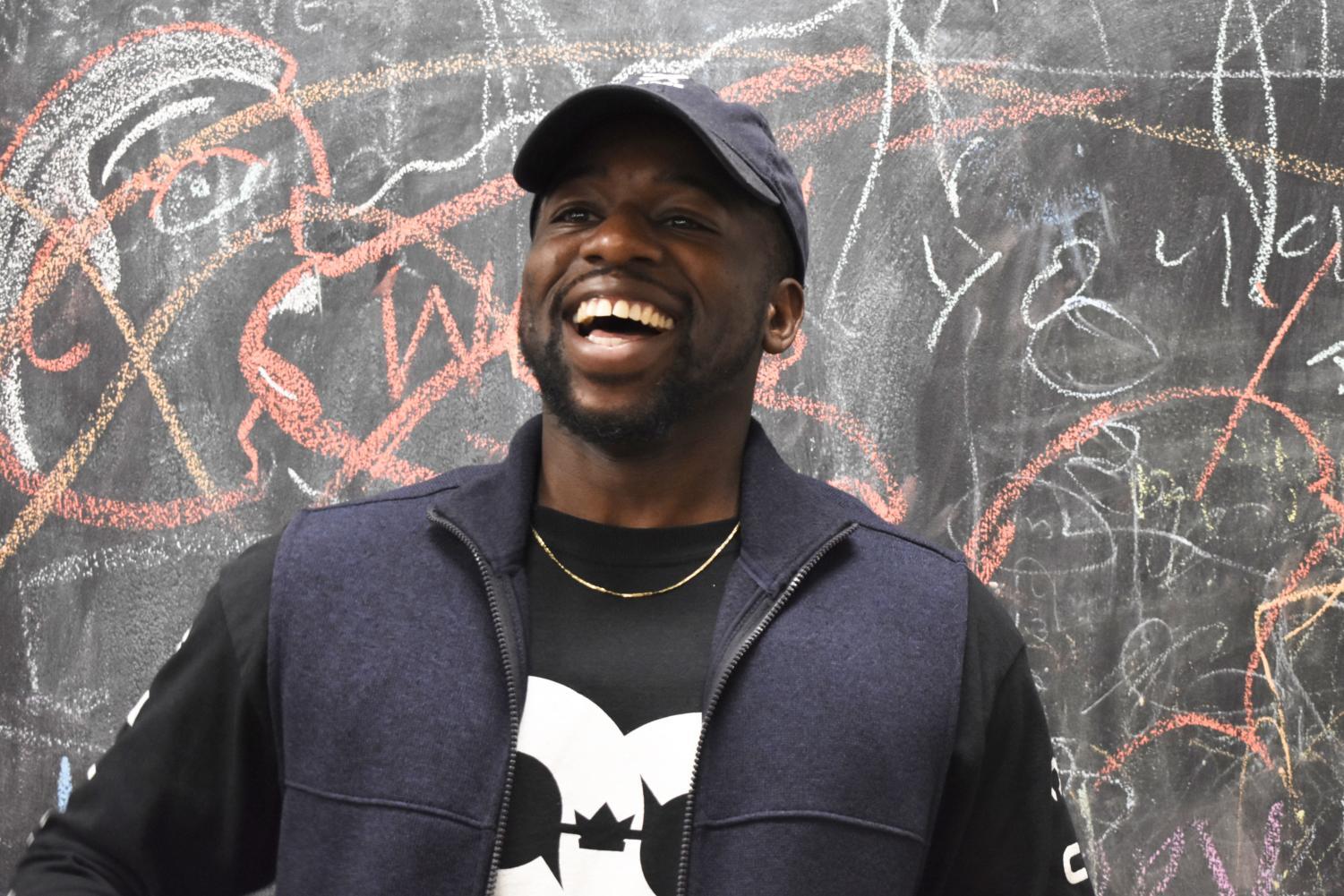 Emiola J. Oriola: Fostering faith in each other

Emiola J. Oriola is a practicing Christian — and has been all his life. But on any given day, you have a good chance of catching him at a Quran study. Or at a Shabbat dinner. Or a Diwali festival.

It may seem unusual to practice a religion that’s not your own, but this is what drives Oriola’s work. As program manager for Pitt’s Office of Interfaith Dialogue and Engagement, Oriola’s job is to promote dialogue in both secular and religious communities through events, programming and networking.

Based on a similar program at Xavier College, Pitt’s interfaith office was originally established in 2017 within the Department of Student Affairs. But it wasn’t until Oriola’s hiring in December 2018 that the office gained its first and only official employee.

Though Oriola has been the program manager at the interfaith office for a little more than a year now, his own roots in faith go back to his childhood, when he traveled across the United States with his mother, a Christian missionary.

For Oriola, this meant frequent moves and exposure to unfamiliar faiths and religions. At one point, Oriola’s family stayed in the basement of an Ethiopian Muslim family who occupied the house’s second floor — yet everyone came together every evening at meal time.

“Food has a way of breaking barriers, because you can’t really be angry with a mouthful of food,” Oriola said. “There’s something about breaking bread with somebody … and doing something in unison, that kind of allows you to relax and get to know each other.”

Oriola said experiences like this gave him a closely observed understanding of the passion other people held for their beliefs, which often mirrored his own passion for his faith.

Despite moving around frequently growing up, Oriola arrived at Pitt for his undergraduate studies more than a decade ago and hasn’t left since. After earning his B.A. in psychology in 2013, Oriola went on to earn his master’s in theology and divinity from the Pittsburgh Theological Seminary.

But before becoming Pitt’s one-man interfaith office, Oriola was employed in the Swanson School of Engineering. He served as associate director of Investing NOW — a pre-college STEM program for underrepresented youth.

During his time with Investing NOW, Oriola said he discovered the importance of using alternative forms of teaching to engage students — through storytelling, narrative sharing and experiential workshops, rather than a simple classroom lecture.

“I found out that art has a way of being a bridge to engage people in tense subjects,” Oriola said. “Usually religion and politics are no-fly zones — if you want to remain civil, don’t talk about those two things. But it’s like, how do you not talk about two things that impact people so deeply?”

As a poet and writer himself, Oriola got creative with building metaphors around difficult subjects — a principle he’s since put into practice both in the interfaith office, and while working toward his Ph.D. in out-of-school learning.

Oriola attempts to breach these difficult subjects through workshops that employ ground-level metaphors that everyone can understand. One such workshop, titled “How strong is your interfaith Wi-Fi?,” draws comparisons between things like hot spots, dead spots and two-way traffic to a person’s capacity for empathy, acceptance and human connection.

“I’m big on using whatever gifts you have to help convey your message,” Oriola said. “So we use metaphors, similes, analogies to meet people where they’re at.”

Another method includes handing the platform off to others. First-year neuroscience major Khawla Fentis experienced this firsthand during the office’s World Interfaith Harmony Week in early February at an event called Mindfulness Monday.

At the event, which took place in the William Pitt Union Assembly Room, Fentis spoke in front of the group about what mindfulness and empathy mean to her as a practicing Muslim. Fentis said she arrived on campus for her first semester unsure of the level of acceptance in terms of Pitt's religious climate, but was met with empathy from Pitt’s interfaith community.

“Not only did I get to share my own views, but I got to share them with people that I’m normally not connected with on a regular basis, and so it made the event that much more worthwhile to me,” Fentis said.

Fentis attributes much of the success of the interfaith office to Oriola’s ability to foster a community that spans the different faith groups on campus and in the larger community — she referred to Oriola as the “initiator” of these things.

Tasked with building the office from the ground up, Oriola said establishing relationships with religious groups on campus and in the community was a long-term process that required patience in exchange for the payoff of building the office on a solid foundation.

“I don’t want to make this a badge on the University’s chest with just events,” Oriola said. “Relationships last longer than programs, and they mean more.”

Though Oriola is the only official employee of the interfaith office, there are two advisory boards — one student and one professional — which meet several times each semester to discuss furthering the office’s mission along with ideas for future programming.

Krissy Moehling, a postdoctoral scholar at Pitt and a member of the professional advisory board, first got involved with the interfaith office after attending an open house last year.

But like Oriola, her own experience with differing religions began before she arrived at Pitt. Raised as a Presbyterian, Moehling was first confronted with a multitude of different faiths as an undergrad at a small liberal arts college with a large international student population. As she got to know people better, Moehling began having conversations with Muslims, Buddhists and Taoists, gaining an appreciation for the things that informed each person’s faith.

Years later, Moehling’s interest in faith extends into her research which, in part, examines how religion and spirituality affect a wide range of health-related topics. She said she’s seen the general dialogue around religion on campus gradually become less of a taboo topic in recent years.

“There’s an acknowledgement that this is important, there’s a hunger for it, and there’s a desire for this work to take place,” she said.

Oriola leads the interfaith office with three key tenets in mind — dialogue not monologue, unity in diversity and people first. It was the last of these in particular that struck Moehling as an essential element of Oriola’s interfaith work.

The ability to listen — part of the “dialogue not monologue” arm of the office’s mission — was particularly important to Oriola when he first arrived in his position at the interfaith office. At that time, Oriola said, Pittsburgh faced a particularly tense religious climate in the wake of the Tree of Life massacre. It was necessary to listen to the community’s needs and wants, Oriola said, in order to help people process and recover.

“Sympathy is great because it’s like, ‘I feel for you,’” Oriola said. “But empathy is like, ‘No, I’m gonna sit with you, even if I have nothing to say.”

In becoming a resource to the community, Oriola said he first felt like he was making progress when Pitt’s Muslim Student Association approached him for his help in displaying prayer rugs in front of the WPU to honor the victims of the attacks in Christchurch, New Zealand.

“That’s when I knew some of the ground was really being broken, at least on campus,” Oriola said. “It’s just been an honor and a privilege to not just be a part, or to lead, but to learn from them.”

As time goes on, Oriola said he’s been able to build relationships with community members and earn the trust of faith-based groups more. Similar to MSA, individuals and organizations now seek Oriola out as a resource — the Hindu Student Council even asked him to be its adviser.

It’s this constant cultivation of relationships that Oriola continuously circles back to when talking about the power of interfaith work.

“People are the prized possessions in this thing,” Oriola said. “If dialogue isn’t leading us to better value and understand people, we’re not doing it right.”