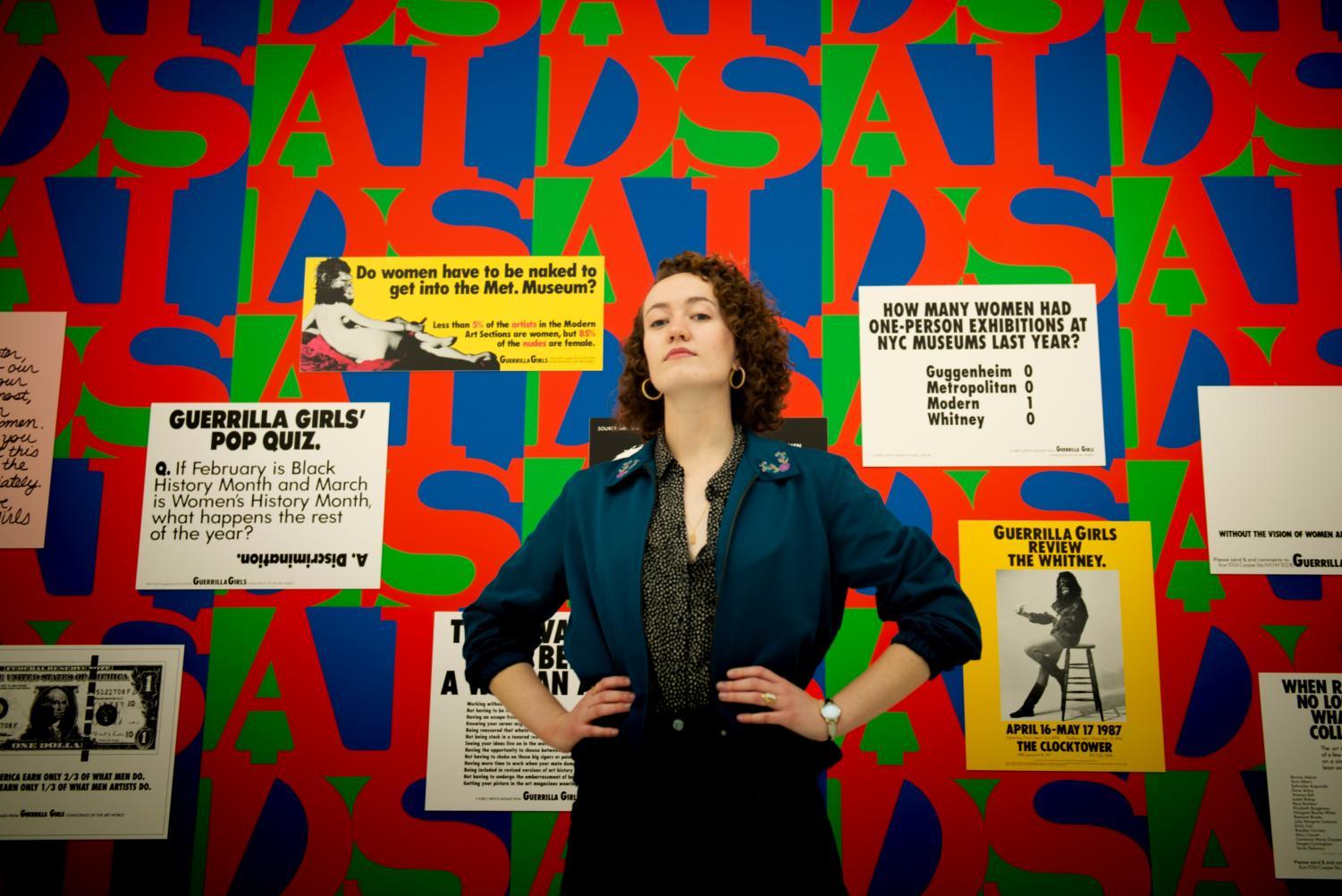 Kirsten Wade: Wading into the unknown

Kirsten Wade has a curious case of wanderlust.

“It’s a habit,” the Pitt senior said. “I like to go places I don’t know, look around and see what I can learn, see if there are new people I can meet.”

But “wanderlust” sums up Wade’s life when she’s not studying abroad, too. It serves as a metaphor for her meandering interests — her passion for art, science, social work and volunteering. In her four years as a Pitt student, Wade has assembled an exhaustive resume encompassing research, mentorship and a whole host of interdisciplinary projects more seamlessly than most people write a grocery list. She’s an urban studies and neuroscience double major with minors in Spanish and chemistry and a concentration in Latin American studies. That’s all landed her a finalist spot for the Rhodes Scholarship, too.

A lot, it turns out. Last summer, Wade went to Manizales, Colombia, on a research mission with Pitt’s Latin American Studies department. One of her favorite memories of the time is taking a spur-of-the moment trip into the idyllic Andes mountains.

But there’s a catch.

“[Manizales has] a very high risk of a wide variety of natural disasters,” Wade said, nonchalantly. “There’s an active volcano … anything built on the slopes has a risk of landslides.”

Wade promises she doesn’t have a thirst for danger, just a longing for adventure. But that high risk of landslides and volcanic eruptions brought Wade to Manizales in the first place — for research purposes, of course. Her project asked the question: how do people function in their daily lives, knowing that it could be upended by disaster at any time? To find an answer, she surveyed and interviewed people of all different backgrounds in Manizales — politicians, Red Cross officials, ordinary citizens and those who had been directly displaced by disasters.

“There’s definitely a very present awareness of disasters,” Wade said. “But most people, for varying reasons, insist it won’t affect them.”

Since returning from Manizales, Wade has frequented neuroscience labs, done social work at the Birmingham free clinic and taught classes on international urbanism.

Michelle Wade chalks up her little sister’s versatility to her “insatiable curiosity.”

“She would have five majors if she could,” Michelle told me. “She’s always on the hunt for new experiences and opportunities.”

I interviewed Kirsten Wade for the first time last spring, when her myriad of interests left her feeling as lost as a wayward traveler — “are my interests too broad? I hope not,” she said, anxiously. This past February, I interviewed her again, and it was like talking to a different person.

“Previously, I think I viewed my own curiosity as something I needed to have an answer to all the time. I had curiosities, but I felt too mentally frozen to explore them,” Wade said. “Now, I realize that not having that answer is the whole point — and my curiosity feels so much more real, livable, captivating and insatiable.”

For the most part, Wade’s curiosity has shaped her into a creature of passion — someone who wants to help the people she meets and learn everything she possibly can about the human condition. That’s partly how she cultivated an interest in neuroscience.

“I remember jokingly telling people [in high school] that I wanted to study brains because of how weird they are, and four to five years later that still somewhat holds true,” Wade said.

Wade’s always been fascinated by how humans come to understand themselves through interacting with the world, she says, and all of that understanding occurs through processes in the brain. But despite the “understanding” that can arise from studying neuro, scientists actually know very little about the brain, Wade said. Luckily, wading into the unknown is Wade’s speciality.

“I love how frequently we arrive at points in class where the professor stands in front of us and says ‘We honestly do not know,’” Wade said.

One activity that allows Wade to dig into her not-yet-realized interests is her role as program coordinator for Alumni Breakfast, where she invites speakers from different backgrounds to speak about the work they do.

“We call it existential crisis Tuesday,” Wade said. “Because a lot of speakers come in with cool professions I’ve never heard of. And I just say ‘Oh no, am I gonna go into that field now?’”

I attended an Alumni Breakfast with Wade on a damp Tuesday morning in February. Even though it was 8 a.m. and the speaker had a job in engineering, one of the few fields Wade hasn’t touched, she diligently scrawled away at her notes as he spoke, blue eyes sparkling with passion.

A couple years ago, one speaker in particular grabbed her attention. Jennie Dorris has done research at Carnegie Mellon University studying how patients with Alzheimer's and dementia reacted to certain stimuli — namely exercise, art and music.

“Arts and neuroscience put together!” Wade said. “It was my dream.”

Arts and neuroscience put together is exactly what Wade does in her lab now. She’s an undergraduate research assistant in the department of neuroscience, studying the limbic system — a set of structures in the brain that deal with emotion and memory — in mice and humans.

Wade is part of the mouse team, and she specifically studies a cluster of cells near the amygdala to try to understand neurodevelopment in areas of the brain involved with emotional processing. To observe the cells, Wade and her colleagues stain mouse brain tissue with a plethora of different colors.

But despite Wade’s love for neuroscience, her first job actually had nothing to do with brains at all. As an Americorps member during the summers before her first two years of college, she mentored 30 low-income inner city students. The project she’s most proud of was when she taught them about the dangers of climate change and what they could do to curb its effects.

“We taught them the little things like ‘Turn off the lights when you’re not using them,’” Wade said. “But we also had them memorize the greenhouse gases. I watched a lot of them educate their parents about greenhouse gases, actually.”

Having grown up in a small town in Massachusetts and attending a Catholic school, Wade said a lot of the lessons weren’t as progressive or inclusive as they could have been. It wasn’t until she attended a social justice camp the summer after her senior year of high school that she began to learn about intersectionality and the concept of “privilege,” which she tries to recognize in herself and use to lift up others.

“That’s actually how I got interested in food policy. I learned about food deserts at camp,” Wade said. “How are people able to stay healthy if they don’t even have access to healthy food?”

Shelly Danko+Day, a food policy expert in the Department of City Planning, said interdisciplinary expertise could bring an interesting spin to the topic of food insecurity, a project for which she was actively recruiting interns two years ago.

This brought Wade, a Pitt student with a double major in neuroscience and urban studies, into her office.

“I just immediately thought ‘Wow, she’s great,’” Danko+Day said. “She presented a lot of ideas integrating her studies in neuroscience and urban planning with food policy … I was so impressed. I remember assuming she was in grad school.”

In her interview with Danko+Day, Wade emphasized the need to view the issue from a personal perspective. It was an idea Danko+Day had never heard before, she said, but Wade took the project and ran with it.

Over the course of a semester she fished out data from the health department and layered it with rates of food insecurity by district, then compiled everything into eight separate reports.

Most people tend to focus solely on the data when doing a quantitative analysis, Danko+Day said, but Wade actually viewed each data point as a person, and wanted to paint a picture of every individual she described in her graphs and charts.

“When you talk about health and health access, it’s very important to realize there are real people you’re talking about, feeling the effects of a certain policy,” Wade said.

“That question haunts me,” she said at the time.

This year, before packing up my things and shrugging on my coat, I ask her that question again. Wade furrows her brow and tucks a strand of curly red hair behind her ear. She definitely wants to explore neuroscience research, she says, and she’ll probably go to graduate school. But other than that, she’s not completely sure.

She pauses, allowing herself a relaxed smile.

“The simple truth is, I’m not sure where I’ll end up,” Wade said. “But I am excited for the work I’ll do as I figure it out.”