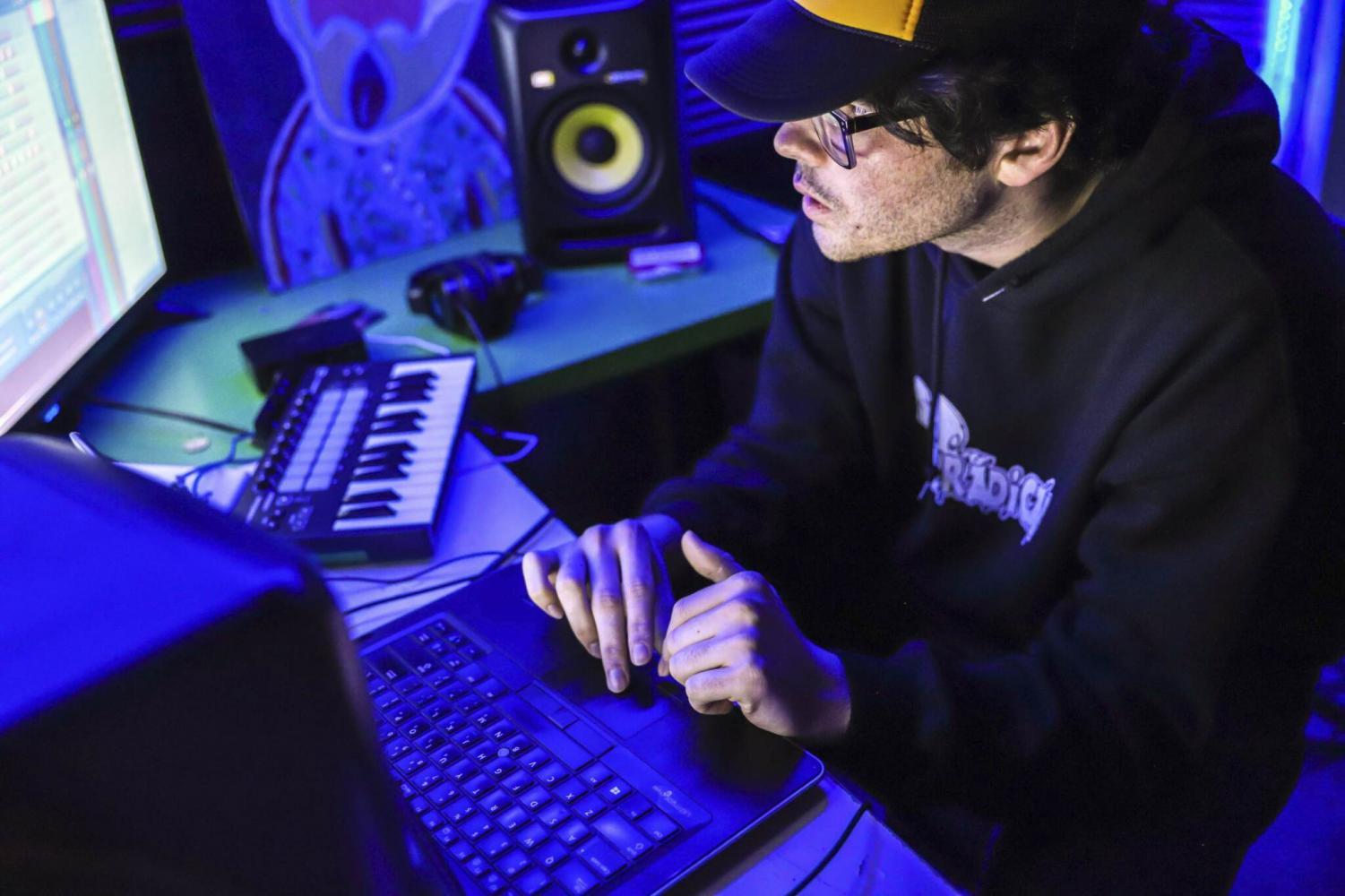 Nate Palmer nods to the bright rhythm of soul music and rap beats filling his tiny basement recording studio in South Oakland. The hue of blue light from the computer monitor and strung-up Christmas lights beam down on the hat, labeled “HUGE PALMER,” perched on top of his head.

The studio, formerly a closet, features his recording equipment and mixing software, as well as numerous vinyl records, including music from the film “Close Encounters of the Third Kind.” Sometimes, Palmer plays nature shows or old cartoons on mute to inspire him while he works. But most of the time he’s focused on listening to his beats and fragmented rhythms over and over again.

Palmer, a junior communications major, discovered his talent for music making during middle school. Since then, he has recorded 59 tracks across three albums on SoundCloud and performs at basement shows. A Pittsburgh native, Palmer said he really found inspiration for his raps and beats around the City when he was in high school.

“I always liked that [it had] this blue collar charm and I just liked the griminess...all of this stuff going on that isn’t necessarily beautiful or anything but people here still appreciate it,” Palmer said.

Now, Palmer draws more of his inspiration from AdultSwim cartoons like Robot Chicken because he likes the way the grainy VHS texture of old cartoons sounds like his music. Although Palmer still finds inspiration around the Steel City, in some ways he feels that Pittsburgh has lost some of that “blue collar charm'' he used to be inspired by.

“I think the City’s just changing, it’s becoming a happening place to be — like if you go down to East Liberty — it’s just a new kind of Pittsburgh for young people,” Palmer said. “I always thought there was something special here that no one knew [about], but now it seems like people do [know] so it’s losing some of its charm in that.”

Despite the change, Palmer still feels connected to the City and knows he wouldn’t be the creator he is today without Pittsburgh. Since coming to Pitt, Palmer has continued to make music, often performing at house shows where he freestyles with friends and performs some of the songs he works on in his free time. Over the years he has often performed under a variety of stage names including Daddy Ginger Ale, Truey Voutin — which is still his SoundCloud handle — and Gangster Bear.

But since his first year of college, he has been performing under a new name. During orientation, Palmer introduced himself to his floor as “Big Nate.” As a joke, he said, whenever he spoke loudly or got excited, Palmer’s close friends would call him “Huge Palmer.”

“I thought that would be a really good stage name,” Palmer said. “I guess that’s another side of me because I’m not always like that. The way I saw it was that if I’m going to perform and make music [I] should be a very confident version of myself.”

Palmer’s friend, self-proclaimed hype man and roommate, Zeve Cohen — a junior mechanical engineering major — has witnessed the transformation from Big Nate to Huge Palmer firsthand. Since their first year, Cohen has been to most of Palmer’s shows. Throughout this time, Cohen has seen how embodying Huge Palmer has influenced Palmer as a performer.

“I think he has a really great stage presence in the way that he seems very comfortable and relaxed on stage which is good because then the audience is more in it with him,” Cohen said.

In the past, Palmer said he felt pressured to appeal to his audience, and didn’t enjoy performing or making music this way. But over time Palmer’s found that as long as he likes what he’s making and is happy with the product, he enjoys performing and he feels the audience enjoys it too.

“Especially now, so many people make music it’s hard to make something completely new,” Palmer said. “I think the easiest way to do that is to build off of what someone else is doing or blend things together in a way no one would expect to do.”

For some of his newer projects, Palmer begins by sampling soul music, like “Maybe Just Maybe (We Can Fall in Love Again)” by Blue Magic, on YouTube. His repertoire primarily consists of emo-rap and beat tracks based off of soul music with a ’70s funk sound. While YouTube clips of nature shows run on mute, he begins to cut and test different snippets of the track — often listening to the same sample on loop multiple times.

Once he’s found the perfect sound bites, he begins to search through an endless catalog of instrumentals that he’s built up over the years. He’ll click through drums — kick, snare and bass — and then horns — saxophones and trumpets — often blending the original soulful sounds with up-tempo rhythms and brighter tones.

As the nature shows and cartoons run silently in the background, he listens to loops over and over again, isolating and rearranging the rhythms as he goes. Palmer said that he’ll sometimes inadvertently stay up until the early hours of the morning just trying to perfect a beat. His friend, Ben Johnson — a first-year pharmacy school student — said this is something he finds admirable about Palmer’s work.

“I think one thing that I really admire about him is his perseverance — because he makes his own beats and he makes his songs,” Johnson said. “He’s the type of guy who I feel is always thinking of ways to improve [his music].”

Palmer and Johnson perform at shows together, often freestyling over beats that Palmer has made. Working with Palmer has given Johnson the opportunity to grow as an artist. Since collaborating with Palmer, Johnson has started working on a mixtape that he hopes to release this summer.

Johnson often runs his ideas for songs and lyrics past Palmer, who offers helpful critiques and advice for Johnson’s music. Johnson said he attributes a lot of their success on stage to the friendship they’ve cultivated off stage.

“The fact that we vibe and have good energy together outside of music allows [us to] just have a lot of fun with [our music] and not really worry about what the other person’s doing and just enjoy it,” Johnson said. “If people get to hear that, great. If not, we’re still having fun.”

Since becoming more serious about his music, Palmer said he has faced many ups and downs in his mental health. He admits that his struggles with his mental health have inspired him to let his mood guide the music he makes. Although Palmer strives to capture a lot of positive energy in his melodies and rhythms, he often finds his work reflects his emotions at the time the music is made.

Palmer hopes that by staying true to his emotions, he will be able to connect with his listeners better. But even in his sadder songs, he said he hopes to shed some light, often connecting back to how he overcame his struggles. Whether it’s through his beats or lyrics, Palmer said touching on the transient nature of happy and sad moments is critical to creating honest music.

In the future, Palmer hopes that he’ll continue to make music and stay true to his emotions and wants to continue helping others come into the local music scene. Palmer said he also hopes to work a little more on marketing his music as well.

Palmer often finds himself doodling logos for the Huge Palmer brand. Going forward he hopes to market his brand more through creating music videos, merchandise and making music for short films. Ultimately, he wants to continue exploring the other artistic elements involved in making music, while still continuing to produce his own beat tracks.

“I wouldn’t say I’m successful in numbers but I’m successful in making music that I like, releasing it, going to shows and having a lot of my friends come to have fun with me,” Palmer said. “Even having people call me Huge Palmer when they see me.”