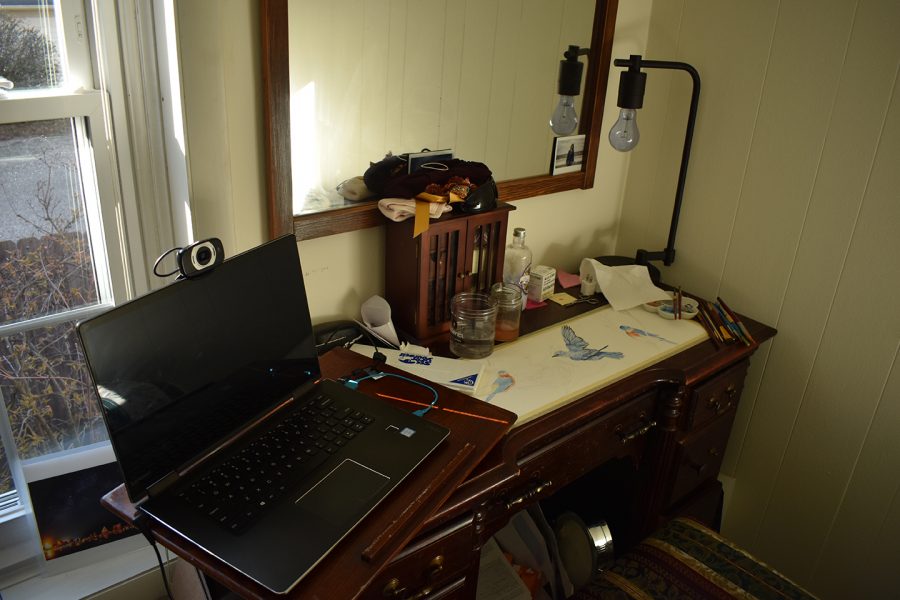 Senior studio arts major Azize Altay Harvey has had to figure out ways to finish art projects at home while learning remotely.

Azize Altay Harvey, a senior studio arts major, couldn’t get her supplies out of the Frick Fine Arts Building before it closed. So instead of using a traditional canvas for her final project, she’s painting a chair in her off-campus residence.

“This is kind of what studio arts teaches you,” Harvey said. “It’s finding where the limits in space and money and time are and creating within them. It’s less about material and more about [an] idea and what you can make with what you have.”

At the end of most spring semesters, the studio arts department holds a senior exhibition in the University gallery in the Frick Fine Arts Building for students who graduate that calendar year, like Harvey. The exhibition features three to five works from each student, in addition to work from students, selected by faculty, in other academic years and majors.

But because of the COVID-19 pandemic, the studio arts department is holding this year’s exhibition in an online capacity on the department website. Seniors and professors involved are disappointed with the transition, but have found new ways to work from home with what they have.

Delanie Jenkins, a professor and the chair of the studio arts department, teaches a mandatory exhibition class for studio arts majors every spring semester. She said students in her class typically finalize what works they would like to share and learn how to present them in a gallery space. This year’s class holds 11 seniors who will graduate either this month or in December.

In the meantime, Jenkins is working with her students to include more images and text in the exhibition course’s PDF catalog of the works with artist statements and descriptions.

“I was consulting with them, telling them, ‘Here’s the things that I think would be appropriate, what do you think,’” Jenkins said. “And they said, ‘Well, we want more.’ So I was like, alright, let’s figure out how to give you more.”

Increasing activity on the Pitt Studio Arts Instagram page has also been a resource to give senior students more exposure, providing a public, in-depth look at what they’re working on and how they complete the projects. The posts have been a combined effort of the senior exhibition class and Alyssa DiFolco, a program coordinator.

The Instagram page featured Harvey, who mostly works in mixed media, on April 4. The post consists of a slideshow of Harvey’s work, including a paper cutting project called “The Tale of Medusa.”

A student in the exhibition course, Harvey said suspending the in-person gallery was ultimately the best decision for the health of students, faculty and potential gallery attendants, but is still disappointed.

“I’ve been having different reactions to it depending on the day and how much I think about it,” Harvey said. “I think that’s what everyone has been feeling, just this sense of loss.”

Jenkins called the senior exhibition experience a rite of passage for graduating studio arts students, as they often invite their friends and family to come see what they’ve created. Jenkins added that while not being able to hold a physical exhibition is a let down, she is still excited to honor her students’ work in whatever way she can.

“All of this is about celebrating our really talented students who are about to walk out the door,” Jenkins said. “[We’re] celebrating their work and celebrating this significant accomplishment for them and featuring their artforms that they have honed the last four years in the department.”

While the department is trying its best to convert the exhibition to a digital space, Jenkins noted that not all of the work easily translates. She said many students have created 3-D or sculpture works, some of which have taken up to a year to complete.

She recalled the work that Lorenzo Buchhalter, a senior studio arts major also in the exhibition course, submitted to the exhibition. A series of small paintings, “Details in Observation, Recollection, Memory & Nothing,” tells the story of Buchhalter’s grief. Jenkins said she thinks there’s more than 100 individual paintings in the piece, and laments they won’t be presented in the intended space.

“That would be an amazing thing to see on one wall, like a constellation of these kind of small intimate paintings together,” Jenkins said.

“Her work was sort of these iridescent sculptural paintings that she was planning on having hang from the ceiling and the light would make them shimmer as they turn,” Barker-English said. “I just keep thinking about that and how disappointing it must be to not be able to show that in the space it was made for.”

Jenkins said the gallery exhibition, in addition to serving as a culminating moment for students, was designed to help students learn how galleries operate and the work that goes into putting one together. She said publically exhibiting one’s art is a large part of the creation process.

Because of the value in experiencing art in-person, Jenkins said she’s working to schedule a make-up gallery at some point in the future if they’re able to organize all the student work again.

“It won’t be the same that it’s been done before,” Jenkins said. “But if we can even show one piece from each person somewhere in a community kind of collective situation, that would be really lovely.”