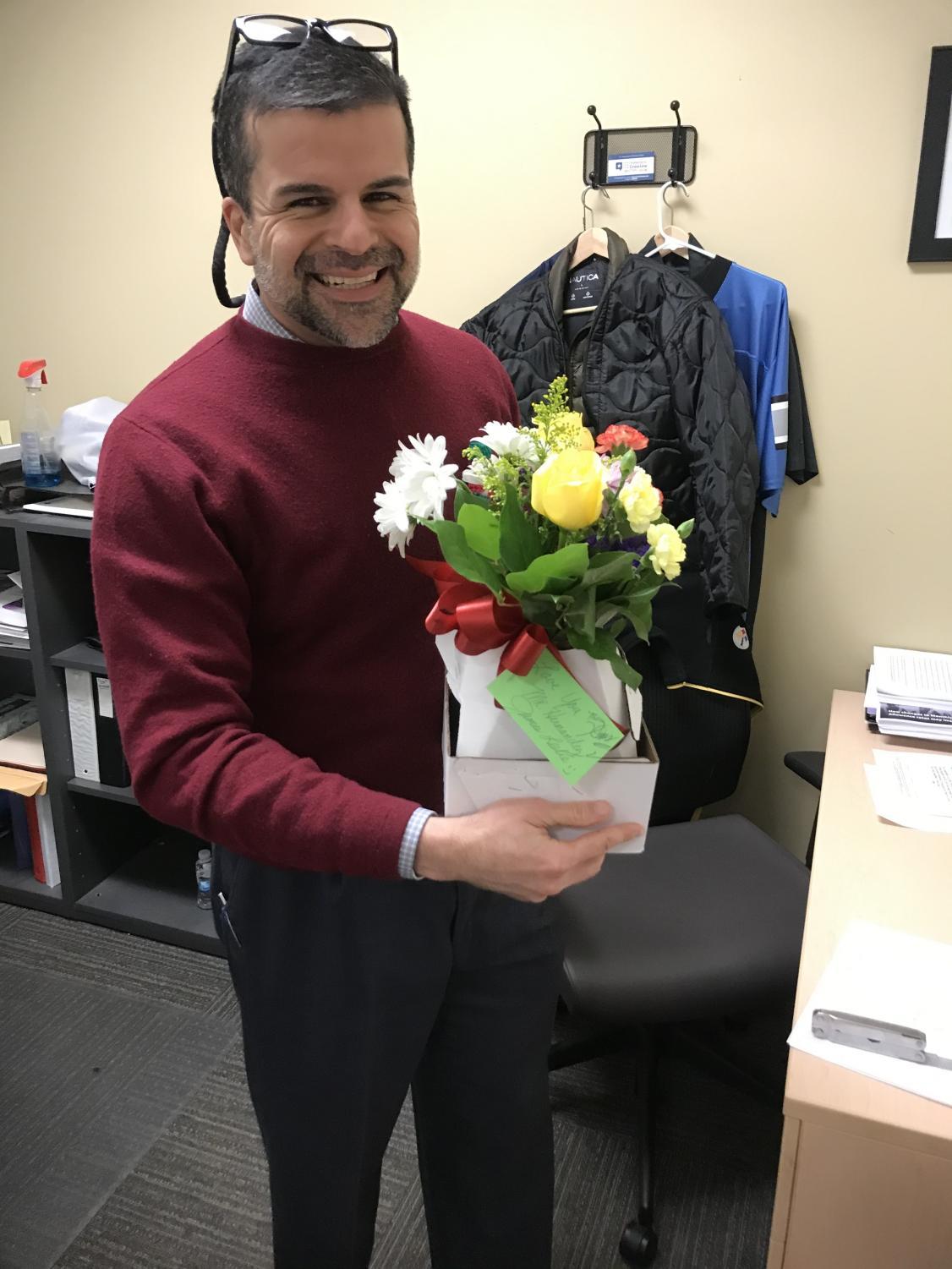 Steve Hernandez is used to helping whoever walks into his office without hesitation, no matter how shocking the situation is or how much it demands of him. When a student veteran who had not been paid by the Department of Veterans Affairs in two months came in with pictures he had been drawing and selling to buy bananas to live off of, Hernandez didn’t think twice about using some of his own money to purchase the man’s artwork.

“He reached into his backpack, and pulled out like three bananas and he started crying,” Hernandez said. “I run up to an ATM machine, [take out] 100 bucks. ‘I’m buying your picture.’”

Retired Lt. Col. Hernandez is Pitt’s benefits coordinator in the Office of Veterans Services. While one part of his job involves sending data to the VA about the roughly 500 student veterans and dependents of veterans at the University, another part is helping anyone — student, veteran, ex-convict — who comes into his office.

While Hernandez is deeply committed to the University, he’s not a Pittsburgh native. He grew up in Saginaw, Michigan, and after graduating from high school, attended the United States Air Force Academy in Colorado. He served for 23 years in the Air Force and was stationed and deployed around the globe in places including Japan, Afghanistan, Hawaii, Turkey, Saudi Arabia and South Korea.

Hernandez’s travels brought him to Pittsburgh in 2012, when he and his family were relocated so Hernandez could serve as commander of Pitt’s Air Force ROTC program. He retired from the Air Force in 2014.

After retiring from the military and integrating back into civilian life, Hernandez faced an issue common to veterans — unemployment. He was unemployed for one year, and in that time, only managed to secure one job interview.

Around this time, a former OVS director told Hernandez about the opening in the office as a benefits coordinator. Hernandez applied simply because it was this job or nothing. When he started the job, Hernandez said he was just grateful to have a paycheck again — he didn’t expect to find such a satisfying entry-level data job.

“That transition to being a helper isn’t anything I could have expected, certainly isn’t anything I wanted,” Hernandez said. “I just did it because I needed a job. But all of those things conspired to put me into a place to help, and I have found that to be as fulfilling as anything I’ve ever done.”

OVS implements an open-door policy among staff members that allows them to be more than just an information hub for veteran students. This policy allows anyone — student veterans, dependants of veterans, people mistaking the office for the VA hospital on upper campus — to receive help from the staff. That help varies from being told where the real VA is to opening up offices as a space for veterans to receive mental and emotional help.

Hernandez helps students battling depression, anxiety and post-traumatic stress disorder, as well as those who are self-medicating with drugs and alcohol. He has attended Alcoholics Anonymous meetings with students and personally brought them to hospitals for detox. Hernandez said the open-door policy has made a huge difference to the students and is what sets OVS apart as a resource for student veterans.

“We really act as like frontline, untrained, uncertified social workers,” Hernandez said. “I’m okay with being vulnerable and talking about vulnerability. But that’s something we’re all willing to do here is, if you’re willing to have those tough conversations, part of the drill I think is you yourself have to be willing to expose some vulnerabilities.”

Hernandez said showing this vulnerability is a place where many student veterans struggle, but the office staff is always ready to listen and help student veterans through whatever they may be working through. He added that some student veterans generally have trouble overcoming communication barriers, but he pushes students to overcome this by being vulnerable himself and listening to what they have to say.

For student veteran Frank Bullock, Hernandez was the support that he needed to get through his college experience. Specifically, he remembered that he was hospitalized partway through one of his semesters, and Hernandez made sure that Bullock could recover and not worry about his academic responsibilities.

“His effect on me was one that made me realize that leadership of self and service to others wasn’t another value that I had to forgo as a result of hanging up my military service hat,” Bullock said. “If it had not been for him, I can say beyond a shadow of a doubt that I would not have graduated from the University of Pittsburgh.”

The OVS staff as a whole are committed to helping students. Brett Foley, one of Hernandez’s coworkers and a 2014 Pitt alumnus, helps Hernandez to mentor and guide student veterans as the OVS program coordinator and work-study supervisor. Foley, who has worked with Hernandez since 2014, said that among Hernandez’s other qualities, the ability to really listen is what makes him such a great resource not just to veterans, but to anyone who needs him.

“I think, more than anything, sometimes we just need a person to listen. And genuinely listen,”  Foley said. “When you’re talking with somebody sometimes, you can get the feeling whether or not they’re there really listening to what you’re saying. Steve is always 100% present — whenever you are speaking with him, he’s always giving you his full attention.”

Hernandez also puts forth the extra effort to get to know maintenance workers, fellow employees and anyone who comes in the doors of OVS so that everyone feels like they are part of the community. Foley said that Hernandez also takes this mantra of building connections outside of the office and into his own home by inviting the staff and work-study students to an annual dinner hosted by his family.

“He’s all about building a sense of community. You don’t have to go to dinner over there, but he always presents it as an option. I always take advantage because they’re all so very kind,” Foley said.

Hernandez attributes a large portion of his hospitality and generosity to his Christian faith, which plays a pivotal role in his life. He attends First Baptist Church at the corner of Bayard Street and Bellefield Avenue in Oakland, where he serves as a moderator, deacon and trustee. Hernandez also leads a bible study on Monday nights at Renewal, a halfway house Downtown for those with criminal backgrounds.

“Whether it’s to ask for help, whether it’s to pray, whether they need money,” Hernandez said. “And it’s not like I got a fat wallet, but if a guy’s in a bad, bad place, I might help him out. If they need medical attention, like they need detox, I’m going to try like heck to find them detox.”

The sense of community that Hernandez tries to build extends past his work in the City. While stationed abroad in Germany, he said his daughter, Nara, became very ill. It was German teachers, nurses and doctors who saved her life. Hernandez said it made him realize that about 50 years ago, the Air Force was firebombing Germany during World War II.

Nara Hernandez, now a junior computer science major at Pitt, said her father has shaped her into the person today, focusing on her relations with others.

“My dad has really influenced me to reach out to lonely people and just encouraging me to take that step to be active has really expanded my network of friends,” Hernandez said. “I think my dad understands that it’s a big world out here, but we’re all in this world together, so it’s important for us to be able just be aware of each other, understand each other, not be shut down by fear.”

Many veteran Pitt alums who have been helped by Hernandez are now helping others. Bullock is employed by U.S. Rep. Tom Rice, a South Carolina Republican, as the constituent services representative, and the student whose sketch Hernandez purchased graduated from Pitt with a social work degree and now helps other veterans.

Hernandez said at the end of the day, while he’s helping lots of people through his work and volunteering, he is just a small cog in the big machine.

“I’m just planting seeds,” Hernandez said. “And maybe those seeds will blossom and maybe they won’t. But your duty is to keep planting those seeds. I’m pretty sure I’m not saving anyone. I’ll leave the saving up to Him.”