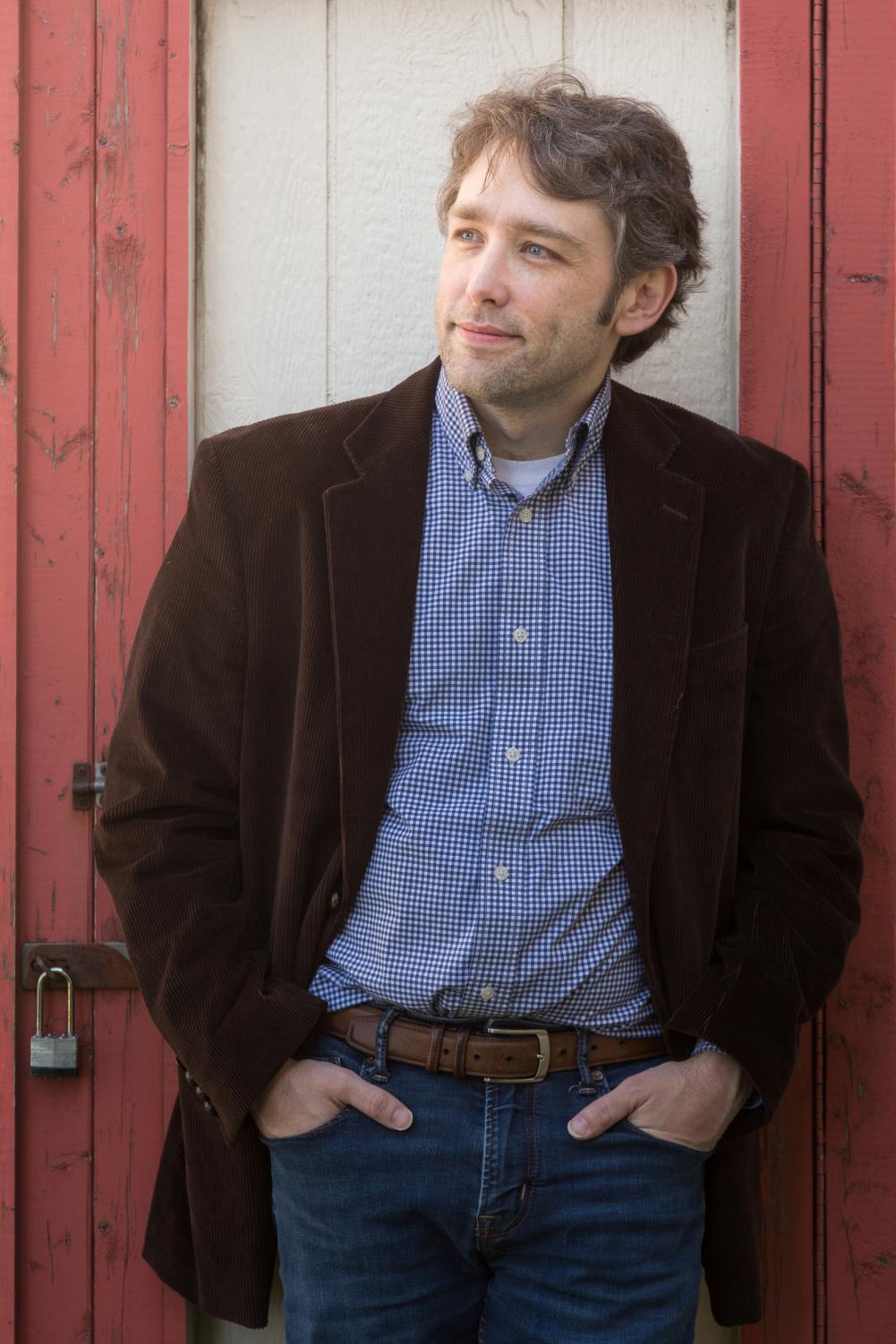 When he was growing up, doctors often told RJ Thompson that he’d be lucky to make it to his 20s or 30s.

“When you're an impressionable young teenager and you hear that,” Thompson said, “what do you do? Like, it's really messed up. So it was then that, like, I just decided I'm going to follow my passions and put all of my effort into them.”

Thompson, the associate director of student engagement within Pitt Business, was born with cystic fibrosis, an incurable genetic disease that affects the lungs and pancreas. As Thompson’s doctors told him, most people with cystic fibrosis die young, but Thompson just turned 35 and is in relatively good health — thanks in part to the University of Pittsburgh Medical Center.

Thompson has been coming to Pitt’s health care partner his entire life to receive care for his cystic fibrosis. He’s participated in many medical research trials throughout the course of his treatment that have helped to lessen his symptoms and led to breakthroughs in drug and gene therapies for cystic fibrosis — including Symdeko, the medication he currently takes to lessen the symptoms of his disease. Recently, the FDA approved a new, more powerful gene therapy called Trikafta that Thompson will soon be on.

“What [Trikafta] does is essentially eliminates the symptoms of the disease completely,” Thompson said. “So I often tell people like when you have a cold and your nose is congested, your lungs have mucus in them. That's basically me every day of my life. And the gene therapy eliminates those symptoms."

This medication has allowed him to pursue a full-time career, something few people with cystic fibrosis are able to secure. At first, Thompson’s parents were hesitant to support him pursuing an education and a career beyond his associate’s degree. But Thompson was determined to get the most out of his life, even if it meant that life was shorter.

“Because most people with CF die younger or don't have great life expectancy,” Thompson said, “I made it a point to really put a lot of focus on the things that I'm passionate about in life — not just my career, but a number of things.”

Thompson made sure to do just that, chasing his early passions into his adult life and career. He was passionate about design from an early age. He started designing when he was 11, frustrated that his Captain America action figure didn’t come with the hero’s famous shield. His family had just gotten a new computer that came with graphic design software, so Thompson used that software to make and print a shield for his action figure — basically serving as his action figure’s own Howard Stark.

This early experience sparked Thompson’s passion for design, as he enjoyed being able to create things for himself. So, he started working with Legos, Adobe Photoshop and Illustrator, learning how to code in HTML to build and design websites before moving on to 3D animation modeling and video editing. He had a whole suite of design experience by the time he left high school, and knew he wanted to study design in college.

Thompson obtained his associate’s degree in design in 2004 from the International Academy of Design and Technology in Pittsburgh, which is now closed. Despite a brief struggle with his parents — who wanted Thompson to stop going to school after getting his associate's degree out of concern for his health — he convinced them that he needed to continue with school in order to live his life the way that he wanted to. Thompson went on to obtain his bachelor’s in design from California University of Pennsylvania in 2007.

After graduating from Cal U, Thompson worked for Heinz North America on a cross-Atlantic team with Heinz Europe to design the logo on Heinz ketchup bottles. After two years of working at Heinz, Thompson decided to check out a portfolio show, where art students were displaying the projects they’ve been working on, at his alma mater, even though the show took place in the middle of his work day.

He left the office without telling anyone and stayed at the portfolio show for about three hours. Although his supervisor yelled at him when he returned, Thompson has no regrets about taking the risk and going to the show, because it led him to an important realization — he wanted to teach.

“I'm very aware that my time, despite the medications that I'm on, is just a little bit more limited than everyone else's,” Thompson said. “And I may live to be 100. I have no idea. But, you know … I wouldn’t be here if I did not take foolish risks in some cases. And in some cases calculated risks.”

Thompson applied to grad school with the intent of becoming a professor. He left Heinz and got his MFA from the Savannah College of Art and Design online before becoming a professor at La Roche College in Pittsburgh at 24 years old. Thompson then taught web design and web portfolio at Carnegie Mellon University before moving on to teach at Youngstown State University in Ohio.

“At the time it all clicked into place,” Thomson said. “I have a curious mind and an ambitious spirit, so higher education and teaching, specifically being a faculty member, gave me the freedom to explore things that I was curious about.”

Thompson used that freedom to run several design companies while he was teaching higher education. He successfully sold his first three companies and is now on his fourth company, Plus Public. At Plus Public, Thompson uses his design background to rebrand municipalities and increase community engagement, an idea he developed while teaching at Youngstown State University.

Over the course of Thompson’s seven years at Youngstown State, he received a number of different accolades, raised more than $250,000 in grant money and became tenured faculty. He was able to rebrand the city of Youngstown, by changing their signage and logos which is what drove him to create Plus Public. His ability to juggle many projects and execute them efficiently is a part of what’s made him so successful — something that Chris Driscoll, Thompson’s friend and colleague here at Pitt, can attest to.

“I've seen RJ's energy and his creativity in terms of coming up with ideas, workshopping them and then executing them quickly and efficiently.” said Driscoll. “Most people can't do all those phases of a project because they all generally call on a different type of skill set. But RJ, he will just get it done.”

Though Thompson was able to accomplish a lot at Youngstown State, he found he wanted a change of pace and decided it was time to take another risk.

He called two friends at Pitt Business — including Driscoll — to see if they knew of any available positions here. Since he was from the Pittsburgh area originally and happened to have two old friends working there, it seemed like the perfect fit. Luckily, a position had just opened up — the one he has now at Pitt — and Thompson quickly snapped it up.

Most people wouldn’t have given up their position as a tenured professor to work on the staff side at a completely different university, but Thompson has different priorities than most. He said he’s not afraid to “fail forward,” and wants to pass that philosophy on to students as the associate director of student engagement within Pitt Business.

“It's like, yeah, you're going to school for four years, and you're putting all this money into it, and it might take you to the places where you want to go,” Thompson said, “but if those places don't make you happy, then you’ve got to chase what does. Some people never find that out until it's too late, and that can be really unfortunate. So I just try to give [students] the tools to do that.”

Helping students understand that they can have the careers and lives that they want by taking risks and stepping out of their shells to chase their passions is a big part of why Thompson loves working in higher education. Thompson constantly pushes students to be the best that they can be — something that Lorenzo Devine, a former student of Thompson’s, knows very well.

“He challenges the students in a way that makes them better in the end,” said Devine. “It was never challenging students for the sake of doing it. Rather, it was challenging them to get them to come up with a solution that may have a better result than he had imagined, and it made everyone involved in the process better in the end.”

Thompson is currently using one of his own passions to show students at Pitt an example of how you can turn the things that excite you into a career.

As a lifelong Lego builder, Thompson is passionate about Legos — he has many in his office — and used that passion to create an event for students here on campus. The head of Lego North America was scheduled to come to campus on April 17 to do a presentation on the business side of Legos. Though the event was canceled due to the COVID-19 outbreak, Thompson plans on moving the event to the fall.

The event will feature an exhibition of Legos and build sessions, and, according to Thompson, it should be a fun and informative day for students to learn how they can take a passion for something, like Legos, and make it into a giant event or an innovative career.

Through this Lego event and through working with students at Pitt in general, Thompson hopes to give them the tools to understand that while they do need to take care of themselves and work within the realities they face, they don’t have to be boxed into a single interest or talent. They can go outside of themselves, chase their passions and take risks, just as he has, in order to have the best possible life.

“That's not a quality of life, right? Just sustaining and not growing. There's nothing there … I need to go do these things. And if in doing them I'm fulfilling my passion, [even if] my health is declining for whatever reason, whatever factor, right, then that's okay,” Thompson said. “Because I would have lived a life in pursuit of what I cared about, as opposed to having a longer life where I pursued nothing.”