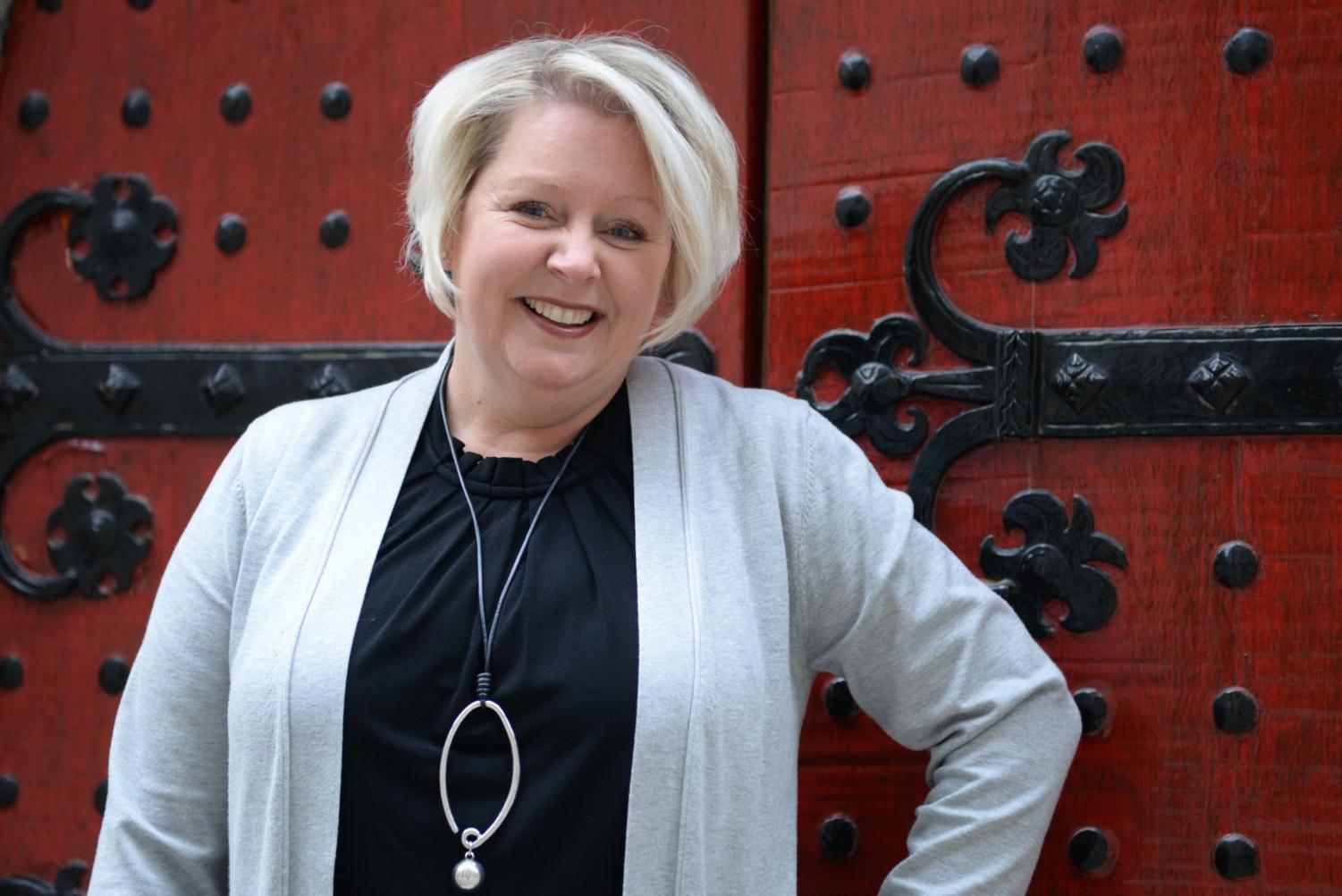 Any Pitt student interested in studying Swedish ends up talking to Eva Albertsson sooner or later — after all, she’s the only professor who teaches it.

It’s not something she really minds, though. She enjoys the small class sizes and working with students who have a genuine interest in her native language and culture.

“They have gone out of their way to make room in their schedule to take Swedish. They often have a personal interest,” Albertsson said. “I never get anyone who’s [in class] but doesn’t want to be there, and as a teacher that is such a gift.”

Albertsson has been the sole Swedish instructor at the University for the past 16 years. On her own, she teaches eight levels of Swedish language and a course in Swedish culture, runs the Pitt in Sweden study abroad program and advises the Swedish minor.

Her path to becoming Pitt’s one-woman Swedish department wasn’t clear-cut. Albertsson, a Swedish citizen, originally wanted to be a lawyer in her home country. Her mother was a police officer who worked with refugees, and she saw how the law could be used to help people. But looking back, Albertsson knows her vision of the legal field was unrealistic.

“I realized I had on very rose-colored glasses when it came to [law]. I was thinking more about ‘Law and Order,’” she said.

Even if it wasn’t part of her life plan, Albertsson always knew she was interested in language study. In Sweden, students receive nine years of mandatory schooling before either entering the workforce or continuing to upper secondary education, where they specialize in a given academic field depending on their plans for university. Albertsson’s program was broad and allowed her to pursue a range of interests, and she took the opportunity to study eight languages — Danish, Russian, Norweigan, English, German, French, Italian and Latin.

Then she won a scholarship from the SwedishAmerican Foundation to study at Gustavus Adolphus College in Minnesota. When Albertsson went back to Sweden, she wanted to continue learning English to meet the language requirement for law school. On her mother’s advice, she entered into a language education program at Lund University and unexpectedly fell in love with teaching.

“I was literally just going to do it for a year or so to see what I thought about it,” she said. “I never went to law school, and I never looked back. I loved it. The second I got out into the classroom, I just found my place.”

Albertsson met her now-husband at Lund University. Upon graduation, he took a job as an engineer with a multinational company, which required the couple to constantly move around for months at a time. For about nine years, Albertsson took long sabbaticals from her teaching jobs to follow her partner around the world to countries like Australia and South Korea but always returned to Sweden.

When the family finally came to Pittsburgh, Albertsson decided it was time to settle down in one place in order to give her children a more stable life. She stayed behind while her husband continued to move around for work.

“[We] came here, and it was only going to be, excuse the dad joke, a ‘Pitt stop’ for two years, but that was 20 years ago now,” she said. “[Our kids] wanted to grow up in one place and go to school in one place.”

Albertsson applied for her job on a whim, four years after settling down in Pittsburgh. She learned about the opening from a newsletter sent out by the Scandinavian Society of Western Pennsylvania — which had originally ended up in the spam folder of her and her husband’s shared email inbox. By the time she saw it, the deadline for applications had already passed.

“My husband, having traveled, was jet lagged and decided to go through our spam folder and found [the newsletter] at four in the morning,” said Albertsson. “It was a Sunday night, Monday morning. I woke up and called around 8, and [the department] listened to my resume, said, ‘Come in,’ interviewed me the same day and the rest is history.”

Claude Mauk became director of the Less-Commonly-Taught Languages Center the same semester that Albertsson started teaching at Pitt. The department originally only offered four semesters of Swedish, with no possibility of a minor, but Mauk felt that Swedish students should be able to get the same depth of instruction as other language students.

According to Mauk, Albertsson had a big hand in expanding the Swedish program, especially since she was the only person in LCTL with the knowledge to design upper-level Swedish curricula.

“I can’t press a button and have a program magically grow,” he said. “[Albertsson], like most of the other instructors in the center, is running her language program. She’s the driving force behind how the Swedish program evolves.”

Albertsson said she wanted to make a Swedish education practical for her students. She saw introducing the minor as a key way to make that happen, because it would mean that at the end of their Swedish career, students would have real credentials on their transcript to prove their language ability.

“That has been the motivation for me, to make it useful for the student, not just a language that you take for fun,” she said. “But make it into something students can use when they leave Pitt, something they can use on their resumes, in their job interviews.”

Swedish classes tend to have much lower enrollment than other language courses. Albertsson’s Swedish 1 courses are usually composed of about 20 students, and class sizes get smaller as the level increases. This semester, she has just one student — Lovisa Ljungqvist Brinson, who also acts as a teaching assistant for Swedish 2 — in her Swedish 8 course.

Ljungqvist Brinson, a junior majoring in neuroscience, enrolled in Swedish because she grew up speaking it with her family and didn’t want to lose her fluency while she was away at college. Albertsson’s classes stress authentic conversation, and Ljungqvist Brinson said she likes that the content feels tailored to her own interests.

“I usually describe the classes with [Albertsson] like playdates. It’s never boring,” she said. “Right now we’re talking about Vikings and their history and runes and the [Norse] gods. I’m really interested in [those topics], and she knows that.”

Ljungqvist Brinson also said Albertsson genuinely cares about her students. She’s careful not to assign too much work if students are busy, and she constantly checks in on their mental health.

“She’ll ask me, ‘Do you have a lot of stuff going on this week? Should I assign this writing assignment?’” said Ljungqvist Brinson. “She’ll switch things around to make sure you’re able to perform your best at things and you’re really okay.”

Except for her husband and three sons, Albertsson’s entire family still lives in Sweden, and she returns every year to visit them. Although she misses her family and her country of birth, Albertsson feels as if she belongs in Pittsburgh just as much as she belongs in Sweden.

Still, sometimes the cultural differences between Albertsson’s two homes are glaring. She sometimes still feels uncomfortable with Americans’ willingness to be open to strangers, because Swedes tend to engage in less small talk. In fact, “small talk” can be translated to “kallprat” in Swedish — literally meaning “cold talk.”

“I take everything literally as a Swede. I don’t speak unless I really really mean it,” Albertsson said. “They say it takes a really long time to get to know [us]. You don’t really know anyone until after ten years, and if you’re lucky you get invited into their homes. I don’t think that’s quite true, but there is a kernel of truth in it.”

Although she loves the United States, Albertsson knows she has been distanced from her culture. In Pittsburgh, she feels Swedish, but when she returns to Sweden, she feels Americanized.

“I always hear that I’m not the typical Swede when I come back nowadays,” she said. “I’m happy [in both places], but I stand out. When I’m home, I’m the woman living in the States, and when I’m here, I’m the Swede. So you do lose a little bit of yourself.”

Ultimately, however, Albertsson thinks that it’s important to recognize cultural differences. During the Pitt in Sweden maymester program, she takes students on field trips to show them the aspects of Swedish life that Americans typically find confusing, like the Swedish educational and political systems.

The trip takes place in Uppsala, a university town. Albertsson pairs her students with language partners from the local universities in hopes that they’ll learn about each others’ cultures and stay in touch once the program has ended. Although young Swedes might speak English and consume American media, Albertsson said students begin to realize their differences once they have deeper conversations.

“[I] show them that even though we might be very alike on the surface,” she said, “there are differences, and we should be aware of those differences. We have fun finding them and exploring them.”

“And I show them not everything is like ‘Midsommar,’” she added, laughing.