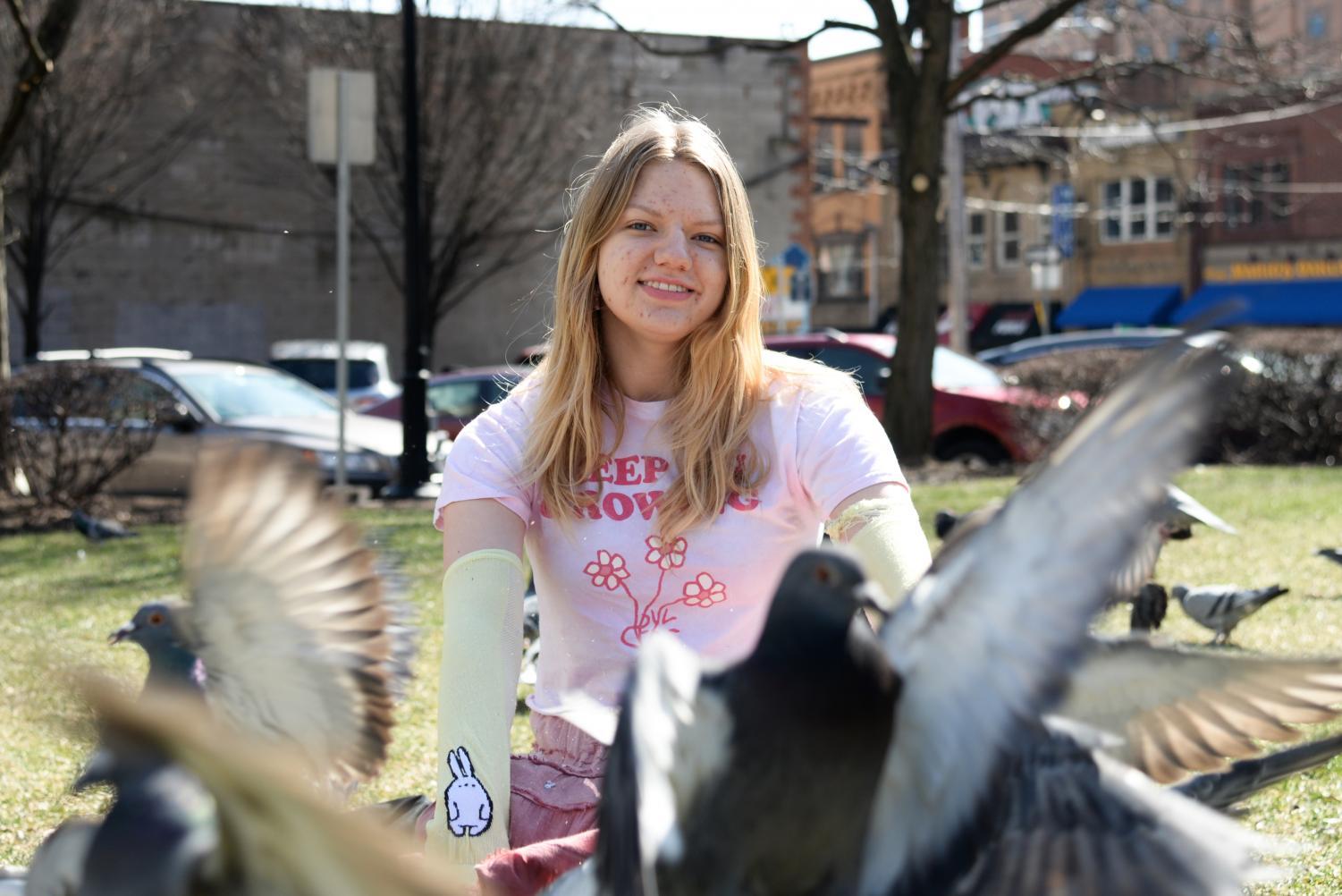 Melinda Shehee rolls up on her Heelys to the stretch of grass between Oakland Avenue and South Bouquet Street. About a dozen of her closest friends are waiting for her. Some mill around in the grass, scratching their claws into the dirt. Others are just sitting quietly, small beady eyes fixed on some object of interest — a crust of bread, maybe, or another pigeon that’s looking particularly attractive. Some of them move towards Shehee. They know what’s coming.

“Oh, there’s the babies,” Shehee coos. As she pulls on her yellow armbands, a faded pair that she keeps in a small backpack with other tools of her trade, more birds begin flocking down and landing around her.

With her loose blond hair, round sunglasses, a long, sequined skirt and the distinctive yellow armbands which protect her from scratches, the pigeons of Pitt recognize Shehee, a sophomore social work major and Oakland’s premier pigeon wrangler. She refers to them, affectionately, as “the Pidgeottos,” Pokémon-style — which feels fitting, since she’s probably the closest thing Pitt has to a Pokémon trainer.

“Some guy saw me working with the pigeons and he said, ‘Is that like…an army?’” Shehee tells this story like a stand-up comedian, with big gestures and character voices. “And I was like, ‘What do you mean?’ And he was like, ‘You do that —’” here, Shehee mimics her own beckoning movement, calling the pigeons toward her — “‘and they come down. Can you like….sic ‘em? Can you make ‘em, like, march?’ And I was like, ‘Maybe…’”

When Shehee moved to Pittsburgh from the Chicago area for college, she didn’t have a particular affinity for pigeons, though she’d always loved animals. In fact, there were a couple of lightbulb moments for Shehee in her first year at Pitt that led her to her current hobby of pigeon-training.

First, she realized that she could make a living off a longtime passion for activism — specifically, disability rights work — by majoring in social work. Shehee has a speech impediment and attention deficit disorder, and she wants her career to involve helping other people with disabilities.

“I was raised to believe that I was inherently lesser or inherently wrong. It took me until freshman year of high school to realize that I was grateful that I grew up with these disabilities,” Shehee says.

She’s hoping to become a behavioral therapist, helping children with disabilities develop skills and routines they might struggle with otherwise.

Here’s where the second lightbulb moment comes in, and where it all comes together, pigeon-wise. In her early psychology courses, Shehee’s professors taught her about the basic psychological principles of learning — the sort of ideas she’d be applying in her future therapy work.

Looking for a way to put what she was learning into practice, Shehee landed on pigeons. Or, more accurately, pigeons landed on her.

The pigeons were everywhere in Oakland, and they weren’t shy — why not try to train them using some of these learning principles? Shehee bought some oats and set to work teaching the pigeons who she was and what she wanted from them. More than a year on, with the help of a treat or two, Shehee can get the pigeons to fly down when they see her coming, hop up on her arms, follow her around and more.

Some are more talented than others. Those are the ones that get names.

“My best pupil yet — he’s Halfway, he’s my favorite, he can just rapid-fire fly back and forth from arm to arm,” Shehee says.

Her routine for training Halfway to fly from her right arm to her left involves a variable ratio reward schedule. Halfway knows that if he flies from one arm to the other every so often, Shehee will open her hand and reveal a treat for him.

Barb Kucinski, a psychology professor who specializes in learning principles, says the methods Shehee describes using are in line with the main types of learning studied by psychologists.  There’s classical conditioning — training the pigeons to associate two different stimuli, the way Russian physiologist Ivan Pavlov trained dogs to associate the sound of a bell ringing with the idea of food. Neither of the stimuli is a reward, per se — neither of them brings about the other, but the subject learns to expect them together. Here, Kucinski says, Shehee has trained the pigeons to associate the sight of her with the concept of food.

Then there’s operant conditioning, the model Shehee uses when she offers a treat to the pigeons when they perform a trick. In this type of conditioning, the pigeons get a reward for good behavior. And pigeons are smart enough, Kucinski says, that they don’t have to be trained individually to learn to expect this reward. They can learn vicariously by watching others.

“[Operant conditioning] has been used working with children with autism, people with learning disabilities,” Kucinski says. “Finding the reward that is meaningful is key.”

Shehee compares her work with the pigeons to a kid practicing their times tables. She can’t practice therapy yet, but she wants to engage with behaviorism as much as she can.

“The foundations of a lot of the skills I would use in my work, they’re founded on these basic things like classical and operant conditioning, so the better you know how to use those fundamental things, the better you can go beyond those to develop more specific techniques,” Shehee says.

Pigeon training is probably Shehee’s most unusual hobby, but it’s not her only one. She writes poetry, and she likes to craft and spend time with her boyfriend, who sometimes sits with her while she’s working with the birds — though always at a slight distance.

Some people complain about the pigeons, accusing them of being dirty and a nuisance. But Shehee likes having them around, and she fiercely shoots down accusations that they pose a public health concern. Especially when she was first starting out, she had a strong instinct to protect the pigeons. Now she’s more realistic about the dangers they’re going to face, she says. But there was one time when she couldn’t help intervening.

“There was one whose wing broke, and it couldn’t fly — don’t get me in trouble for this — so I picked it up and wrapped it in my scarf,” Shehee says.

She wanted to take it to a wildlife rehabilitation center in Penn Hills, but she didn’t have her PantherCard for the bus, so she took the pigeon with her into her residence hall. They didn’t go unnoticed. But by the time a staff member had appeared to question Shehee, she had grabbed her PantherCard, stuck the pigeon in a box and was heading out the door towards the wildlife center. The bird was saved.

Shehee doesn’t spend all her time saving pigeons, but she has learned to speak their language. Her speech impediment, which was much heavier when she was young, made her gravitate towards volunteer work with nonverbal and semi-verbal populations as a teenager. Now, she prides herself on her ability to meet anyone where they’re at — even a pigeon.

“Once you know how they communicate, every living thing has things that show you how they feel,” Shehee says. “Everyone has the right to be able to communicate in some way.”