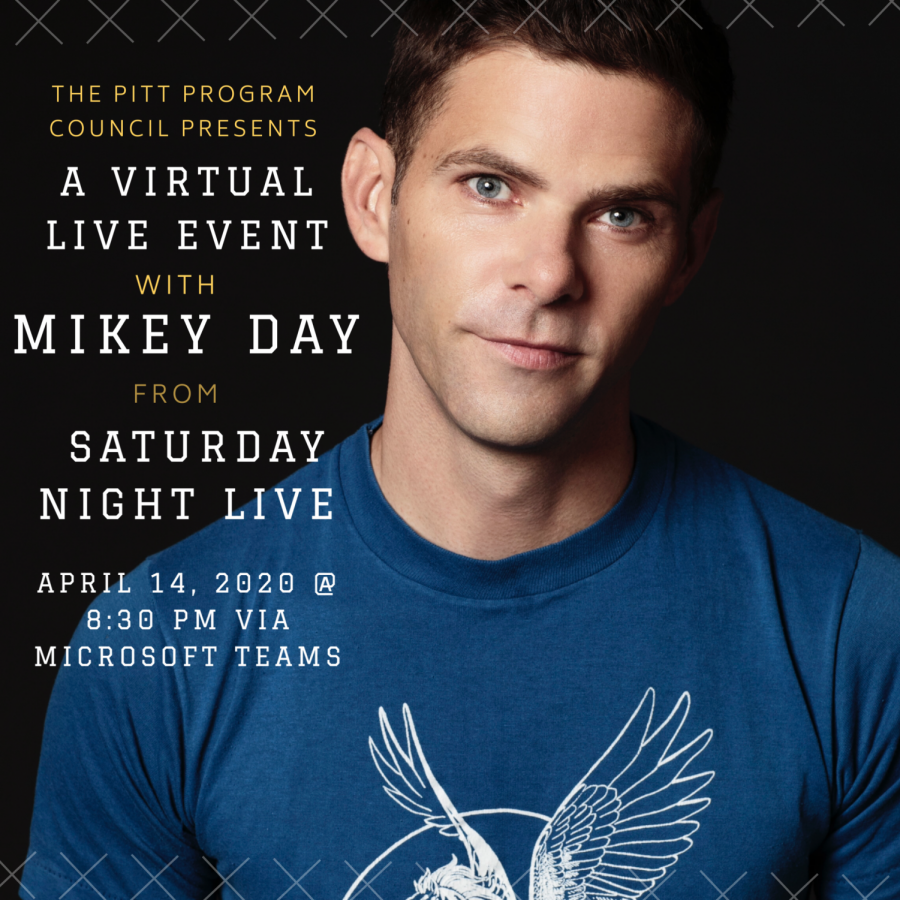 In contrast to his usual surroundings of props and vibrant stage lighting, comedian Mikey Day sat in his New York City apartment Tuesday evening surrounded by pillows and decor.

The “Saturday Night Live” star participated in a live Q&A session Tuesday sponsored by the Pitt Program Council on Microsoft Teams. During the council’s first-ever live virtual interview, Day answered a series of questions over the course of an hour to an audience of about 45 people.

Ellie Simmons, PPC’s director of advertisements and a sophomore marketing major, asked Day questions about his education, career, personal life and current adjustments due to the COVID-19 pandemic. Day is currently social distancing in his apartment with his wife, son and mother-in-law. Because New York City is one of the hardest-hit areas for COVID-19, he said he and his family show appreciation for the city’s health care workers with a nightly ritual.

“Every night at seven, everyone goes out on their stoops or out their windows and claps for the medical and essential workers,” Day said. “It’s kind of become a neighborhood tradition where everyone can go out and see each other.”

He also discussed his participation in “SNL’s” most recent episode last Saturday. Since the cast can’t meet to create a traditional “SNL” show in the studio, they had an “At Home” episode instead which featured Zoom skits recorded in their own homes.

“It was fun and it felt very historic in a way,” Day said. “It was obviously the first episode of its kind, so it was exhilarating wondering what it was going to be.”

The episode was different for both viewers and cast members alike. Day is used to acting in front of a live studio audience, so performing virtually was an adjustment and a new experience for him.

“It’s so different than the usual show,” Day said. “I was just on the side of my computer, waiting to enter the scene kind of like in a real sketch. That was one of the moments where I realized that I will remember this forever.”

Along with answering questions from Simmons, Day also responded to student questions at the end of the event, which were submitted through Microsoft Teams. One student asked what Day’s favorite part of his career has been so far.

Day, who has worked for “SNL” since 2013, said he enjoys being a part of such a popular and influential show.

“Right now, “SNL” has been such a highlight in my life,” Day said. “It’s just such an iconic institution. It’s cool to be part of the legacy, even if in a small way.”

Another student asked Day who his favorite musical guest was. Day said he doesn’t have a clear favorite but has enjoyed watching some very big stars perform on the show.

“I was there when Prince was there, and I was looking at him like, ‘Oh my god, that’s really Prince!’” Day said. “That was really cool.”

Although Day is a well known comedian, Simmons said PPC had no problem in organizing the event, and it came about just like any other lecture.

“Mikey Day was one of the names that came up in an email,” Simmons said. “I was pretty interested because I’m a huge fan of his, so we just started reaching out to him and his agent with William Morris Endeavors, and basically his timeline just worked with ours.”

Although the event was supposed to be held in person at Pitt, Simmons said Day and his team were happy to make it a virtual lecture. The event was historic for both PPC and for Day’s speaking agency.

“It was really cool because not only was that the first virtual live interview that Pitt has ever done, but also the first one for William Morris Endeavors, so a lot of their execs got to watch the interview to see how it went,” Simmons said. “He was super willing to work with us like that, so that was really awesome.”