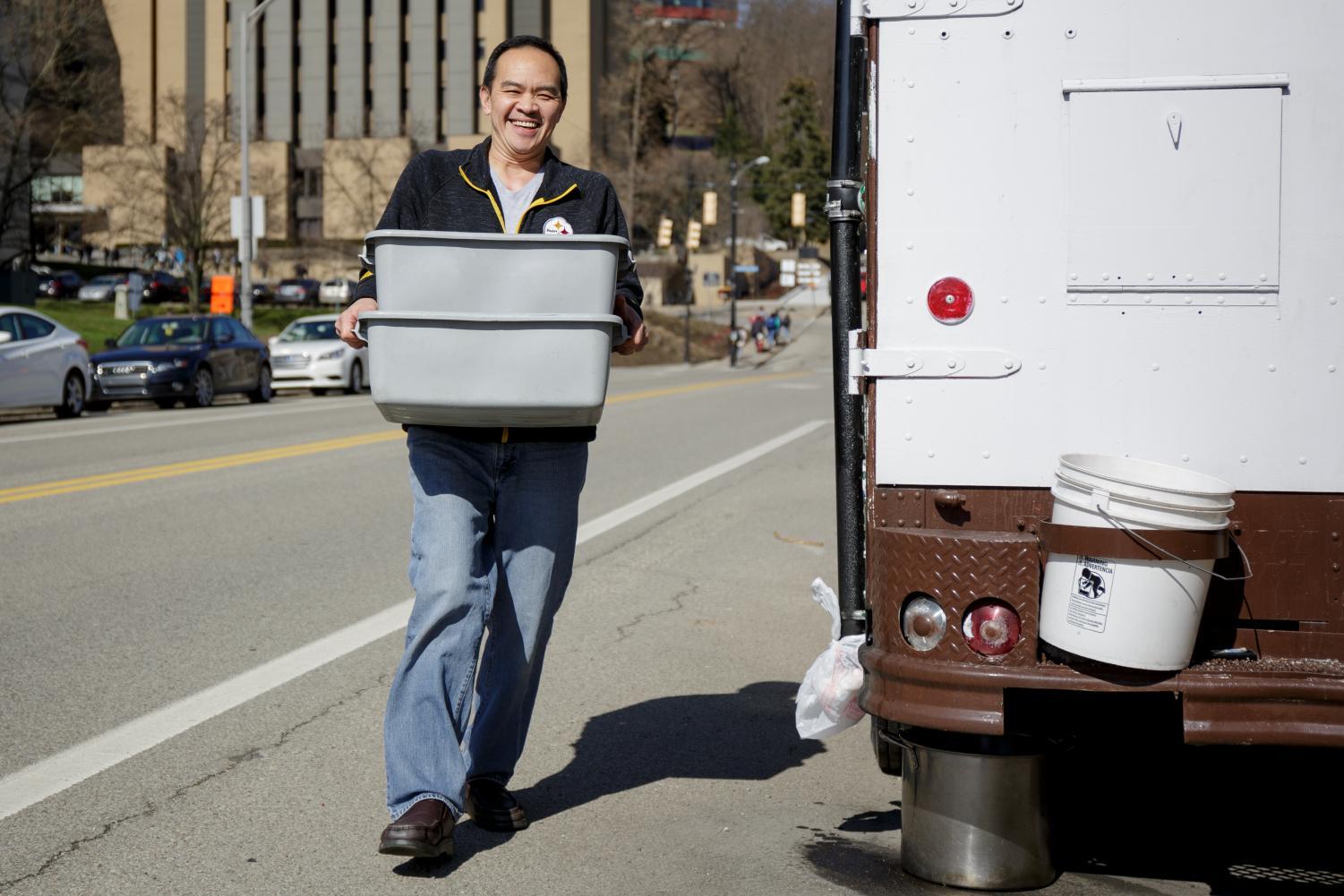 Thai Gourmet Express has called Oakland’s Bigelow Boulevard home since 2012. For nearly a decade, Timothy Vong has been serving up mouthwatering pad thai and pad see ew to dozens of students out of the modest food truck he owns with his wife Vilivan Vong.

But the Thai Gourmet Express experience is about much more than the delicious cuisine. From doling out free candy bars to giving students advice, Vong said interacting with others is what really stands out about the job.

“I try to create a friendly environment and give my customers a warm welcome,” Vong said, flashing the trademark grin he gives every customer he serves. “If I see a friendly, familiar face I come out and shake their hand. As for my students, I treat them and try and take care of them like they’re my own kids.”

Each morning, Tim and Vilivan head to Thai Gourmet — their Bloomfield restaurant the truck is named after — to prepare the day’s supply of food for the truck. Depending on the season, they serve 30 to 120 people per day.

“Fresh, fresh, fresh, everyday. People support us, so we want to provide that for them,” said Vong. “I’m very satisfied and happy to be involved in the Pitt community — to meet the new students in the fall and give them satisfaction.”

The 52-year-old Turtle Creek resident is very satisfied with the life he has now, though his journey to Pittsburgh and the restaurant industry he adores actually took several decades.

Vong compared his childhood years in Bien Hoa, Vietnam, to that of today’s average American kid — spent doing chores and playing soccer with friends. But following the Vietnam War, life became harder and more dangerous for his family. In 1979, his parents made the decision to flee the country with Vong and his five younger siblings to attempt to start a new life elsewhere.

The family paid to squeeze onto a small fishing boat with dozens of other Vietnamese citizens and head for a refugee camp in Malaysia.

But upon reaching the camp, the refugees found out its funding had dried up. The Malaysian police supplied the group with food and permission to live on a nearby beach for two months, but forced them out on a small fishing boat with few supplies after that. With no plan and no set destination, starvation and illness took the lives of some of Vong’s fellow passengers as the days went by.

“We almost gave up. The boat was just drifting in no man’s land. Everybody was on the last drop of their life,” he remembers.

But finally, in a scene that Vong likens to that of a movie, lights shone down onto the boat — three giant Italian naval ships had found them.

“When we got on that ship it was like heaven,” Vong says. “It was like we lived, then died, then lived again. Forty years later I still remember that.”

A pleasant nine-month stint in Italy came to a close with more good fortune for Vong and his family — a couple in West Virginia, Frank and Linda Lambert, had agreed to sponsor them. In 1981, a teenage Vong and his family headed to America to live with the Lamberts.

“At first we were shy. We didn’t know much English, and learning it was pretty hard,” he said.

But Vong said the Lamberts and the community as a whole made their guests feel incredibly welcome, going as far as to raise money to buy the Vongs their own trailer to live in.

“We will always be grateful and cherish them. We still keep in contact,” said Vong.

But once they were able to support themselves, the family decided to move again, this time to Pittsburgh. Vong graduated from Taylor Allderdice High School in 1989 and began taking classes at Pitt before pausing his education in 1991 to help support his family.

“It was very hard to struggle and juggle all that,” Vong admitted, without a trace of bitterness. “As the oldest I had to be responsible and be the foundation for my family.”

It was this need to provide for his family that originally brought Vong to the food industry. During school, he had been working part-time at a Chinese restaurant called Jimmy Tsang’s in Shadyside and upped to full-time upon leaving the University. It was there that Vong began to transform from a shy kid to an outgoing people person.

“I enjoyed greeting people, becoming friends with regulars and socializing with new people,” said Vong. “That’s the best thing about it — it’s the people!”

After around a decade of working full-time to help his family, Vong’s younger siblings had all graduated from college and his parents were stable. Now in his 30s, he was left with a choice — go back to school or continue a path in the restaurant business.

“‘Should I go back to school? Will it be too hard?’” he pondered at the time. “I had learned so much about restaurant skills already. I showed more of a passion towards cooking and how to run a restaurant, so I was leaning towards that.”

Rather than return to school, Vong took his cousin up on an offer to learn the ins and outs of the business at his restaurant in Chicago. But his time in the Windy City left him homesick, so he returned to Pittsburgh and took a job in Weirton, West Virginia, making bread pans in a factory due to a lack of education and job experience.

It was six months before a childhood friend named Bo Meng invited him to work for his Cambodian restaurant in the Cultural District — The Lemongrass Cafe. It was at Meng’s restaurant that Vong met Vilivan, a fellow employee and immigrant from Thailand. The two became friends, and the friendship eventually led to marriage in 2006.

Vong was doing what he loved again working under his long-time friend. Meng took notice of his customer service skills and quickly promoted him to management. Vong still waited tables and helped out in the kitchen even as a manager, performing every task the restaurant needed done. When The Lemongrass Cafe closed in 2003 and Meng opened up a new establishment in the West End called Angkor, Vong made the transition with him.

“Tim was an incredibly hard worker and had great customer service,” Meng explained. “He was a diligent, pleasant person to work with.”

Vong had now been working in the industry for most of his life. Vilivan had spent years working in the food industry in Thailand and had brought that passion to America. Their years of experience led them to leave The Lemongrass Cafe to start their own restaurant.

“It was disappointing to lose two workers I could trust, but they had to go do their thing. I understood — that’s part of growing up,” Meng said.

And thus, in 2004, Thai Gourmet opened in Bloomfield.

“The opportunity to run a business was a dream come true,” said Vong. “We are very happy at what we created. We worked very hard to achieve perfection.”

Tim and Vilivan spent years establishing a reputation for excellence and attracting customers, which included a base of students at Pitt. One student mentioned the existence of food trucks in Oakland, and the entrepreneurial Vongs decided they could achieve their vision of expanding the Thai Gourmet legacy with their own truck.

The two applied to the city of Pittsburgh for a parking permit. The city randomly picks an applicant to avoid favoring any particular individual due to high demand, and one therefore had a slim chance of landing in the Vongs’ lap.

“We were just throwing our names in the hat and playing our luck,” Vong said.

But destiny was on their side — they were awarded a permit to park on Bigelow.

“We were very happy. That university-centric location, with all the students, was perfect for our vision,” Vong said.

After fixing the truck up, passing a health inspection and finding suppliers, the Vongs were faced with the task of attracting customers all over again.

“It’s not like a restaurant, so it was hard at first,” Vong said modestly. “I would stand outside and socialize, say hello to people, answer questions — any friendly gestures. It started slowly, but I think we doubled our customers from the first to the second day.”

Chris Zurawksy, a Pitt alum and long-time patron of Thai Gourmet, said he enjoys eating at the food truck because of their commitment and because of Vong’s pleasant and friendly demeanor.

Vong’s kindness extends further than just his friendly mannerisms. Several years ago, Zurawksy asked Vong to cater his in-law’s 50th wedding anniversary, and Vong was more than happy to oblige. Vong was once again eager to lend a hand when the Squirrel Hill native — now a member of several Democratic clubs and committees — ran for City Council in 2011, putting one of Zurawsky’s campaign signs in his truck.

“There are so many work days that going to Tim’s truck is the highlight of my day,” Zurawsky said with a laugh. “I think about the food and my mouth starts to water. The price is right, it’s the most delicious food, it’s friendly and informal — just such a pleasant experience. It’s almost like an emotional connection. He’s just such an integral part of the Pitt community.”

From simply greeting passersby to allowing customers to call ahead so he can let them know if he still has the supplies for their order, Vong does everything he can to create that emotional connection Zurawsky described.

“I’m a people person. I like to connect,” Vong said. “I want to give them something back besides a smile because they support us. We get to know everyone and it’s like a big family and is very touching.”

And there’s no doubt that his positivity makes an impact. Some students frequent Thai Gourmet Express as many as three times a week throughout their four years at Pitt. There comes a point where they don’t even need to say their order.

“They trust me,” Vong said of his regular customers. “They say, ‘Tim, you know what I like!’”

Those customers don’t let his kindness go unthanked, always returning before leaving Pitt, be it for break or to journey off into the real world post-graduation.

“Students come back at the end of semesters and thank me for saving them money,” said Vong, who prides himself in his affordable prices and willingness to negotiate with students on a tight budget. “Then at the end of their time here at Pitt, they come back and want to take a picture with me. Sometimes they give me a hug! I try to make that little memory go a long way. I wish them success when they leave and definitely miss them.”

Vong can’t help but beam when talking about what his journey to creating Thai Gourmet Express has meant to him.

“Everything has been a blessing in disguise. America has given us so much opportunity,” Vong said. “I get to share my passion and help people. It gets your day going and has just made me so happy.”