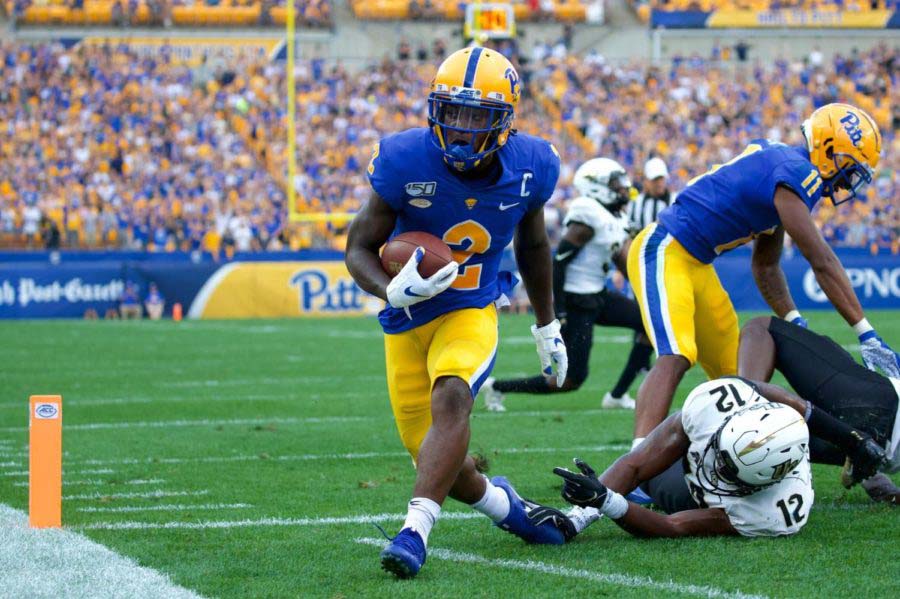 The awards and their recipients include:

This award is given to the male and female teams with the highest cumulative GPA for the 2019 fall and spring semesters. The men’s soccer and women’s volleyball team took home the honors with average GPAs of 3.081 and 3.512, respectively.

This honor is presented to the team whose student-athletes demonstrate the strongest commitment to making an impact in the community. Pitt football won the award.

Heart of a Panther Award

The Heart of a Panther award is presented to the student-athlete who best embodies the spirit of service through the Pitt Promise and is involved in the community above and beyond what is required. Tre Tipton, a redshirt senior wide receiver from the football team, was the winner.

James Conner Comeback of the Year

This honor, named after former Panther and current Pittsburgh Steelers running back James Conner, is presented to a student-athlete who returns to make a noteworthy contribution to their teams’ athletic success after an injury, illness or other hardship. Redshirt junior wrestler Jake Wentzel, who suffered a season-ending knee injury at the tail end of the 2018-19 season, won the award.

Named in memory of former Pitt wrestler and assistant coach David Sandberg, this award is presented to the senior who best exemplifies dedication to academic and athletic excellence, with an unyielding spirit and passionate commitment to the improvement of the University of Pittsburgh and its surrounding communities. Women’s soccer redshirt senior midfielder Juliana Vazquez was the winner.

Male and Female Performance of the Year

This award, solely based on athletic performance, is presented to a male and female student-athlete for the most remarkable or significant performance achieved during the 2019-20 academic year. The men’s winner was junior men’s soccer forward Edward Kizza, while the women’s honor was shared by gymnastics teammates and seniors Alecia Petrikis and Deven Herbine.

Newcomer of the Year

This award recognizes first-years and transfers for their contributions during their first years of intercollegiate competition. First-year setter Lexis Akeo of Pitt volleyball won the award.

Team Moment of the Year

This award is presented in recognition of a striking performance by an individual or group in a specific competition that led to a shift in momentum. Pitt football was recognized for its fall 2019 upset victory against No. 15 UCF.

Male and Female Athlete of the Year

Presented to a male and female standout student-athlete who has demonstrated outstanding athletic performance during competition and has been instrumental to their teams’ success, this award was given to redshirt sophomore Micky Phillippi of Pitt wrestling, and junior Kayla Lund of Pitt volleyball.

Team of the Year

This honor is for the team that exemplified outstanding athletic achievement in the 2019-20 season. Pitt volleyball took home the award, after putting together a 30-2 regular season that saw a record-breaking six Panthers earn All-ACC honors.

This award is presented to the male and female senior student-athlete who best represents the student-athlete “ideal” of academic scholarship, athletic achievement, leadership qualities and citizenship. These recipients will be added to the Varsity Walk, a collection of stone-embedded names outside of the Cathedral of Learning. The winners were wrestling senior Demetrius Thomas and volleyball redshirt senior Stephanie Williams.

The Panther Award is presented to the male and female senior student-athlete who has promoted Pittsburgh Athletics through his or her outstanding athletic achievement, and its recipients will also be added to the Varsity Walk. Seniors Maurice Ffrench and Layne Van Buskirk, from the football and volleyball programs, respectively, received the honor.

Gold Standard Teammates of the Year

This honor is presented to the student-athlete who most effectively inspires his or her team through exemplary commitment, composure and integrity. Winners, one per team, were: