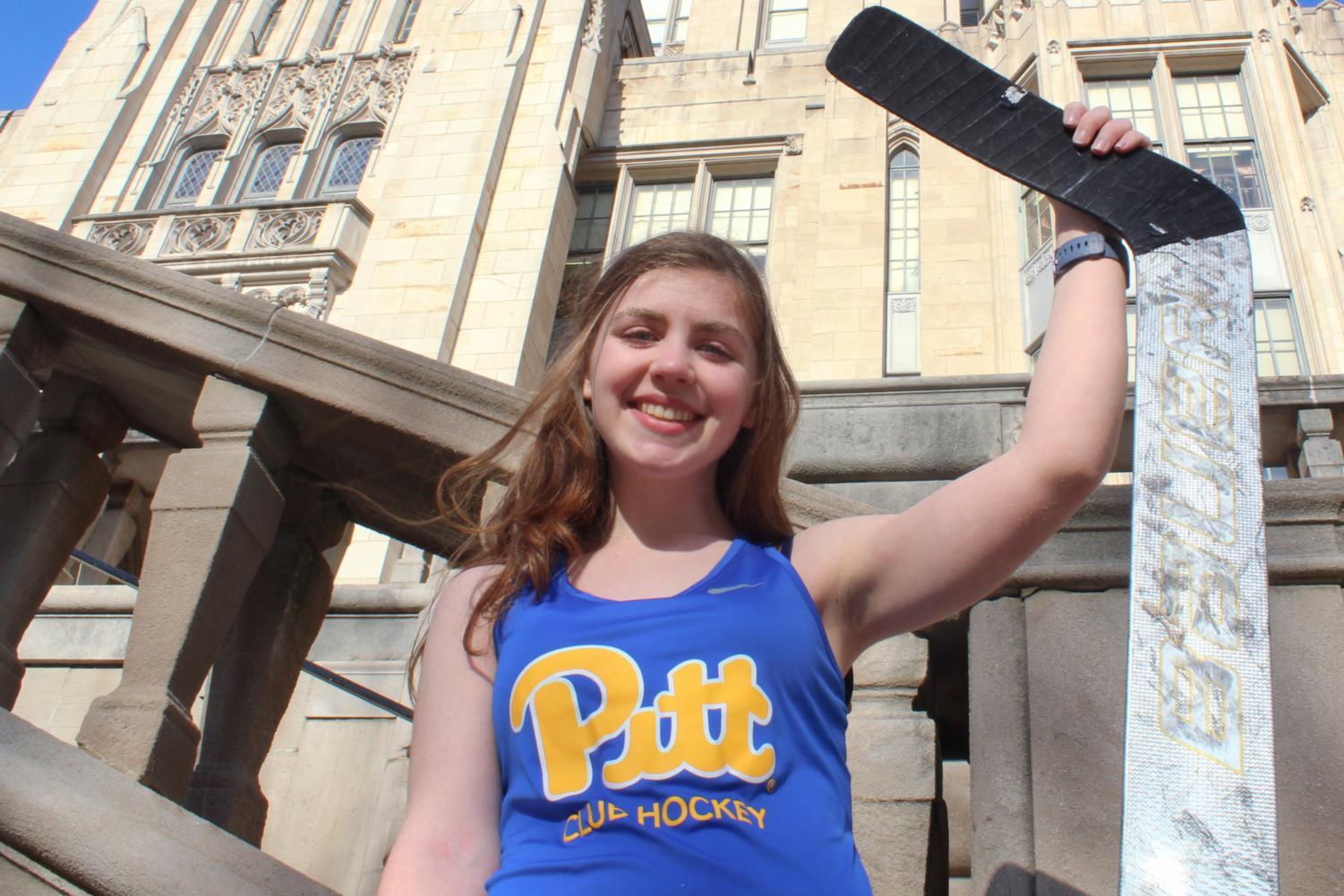 Katie Rerko: Get your head in the game

When she isn’t protecting the net from blistering slapshots, Katie Rerko protects her peers by educating them on an injury that has damaged careers and lives outside of the rink.

Within the organization, Rerko, a psychology major, specializes in raising awareness about the immediate and long-term effects of concussions as well as promoting measures to decrease the risk of concussions anytime someone steps onto the playing surface.

“I talk about my experience with my concussions to try to raise awareness because there’s not as much awareness for concussions as there should be,” Rerko said. “Especially with ice hockey being a pretty contact-heavy sport, it’s important that people are aware of concussion symptoms.”

Rerko received her first concussion in the seventh grade while playing ice hockey. Since then, she’s had one more documented concussion, during her first season of high school. She emphasizes the word “documented,” as she suspects having suffered others that weren’t officially diagnosed.

Sports have always played a major role in Rerko’s life, so much so that it’s easier to ask what sports she hasn’t played rather than what she has. She’s swam, played field hockey, softball, lacrosse and soccer. It wasn’t until the fourth grade, when her family moved to Urbana, Maryland, that she found her true love — ice hockey.

Rerko soon wanted to play the sport at an organized level, but there remained one problem — she didn't live in an area known for hockey whatsoever. Because of this, girls’ hockey leagues did not exist anywhere near her. So she competed in boys’ leagues.

For the next four or five years, Rerko played in several boys’ hockey leagues. On the rare occasion that she did find a girls’ league, she had to drive as far as two hours away to reach practice. Although she played against a few other female players in boys’ leagues, none of them played her position. As the starting goalie for her high school team her first year, many of her opponents underestimated her abilities in net.

“Especially from where I was from, there wasn’t really a developed girls’ hockey league,” Rerko said. “Being able to compete with guys in a male-dominated sport I think definitely threw people off.”

In the eighth grade, coach J. Laffeyette Carter approached a local rink Rerko played at, informing her team of his new organization, SAFEO. From there, Rerko contacted Carter to convey her interest. A couple weeks later, Rerko and some of her teammates met with Carter again to learn about concussions. Later that day, they appeared in a TV interview at the outdoor ice rink in Bethesda, Maryland, to promote the organization and encourage safe practice.

Because of her involvement in SAFEO, Rerko realized she needed to make changes as an athlete to better protect her brain. One of the immediate realizations she made involved her own safety, playing among athletes much larger than her.

“I used to play hockey with boys, and I’m obviously not very big,” Rerko said. “I played against boys that played Junior A and Junior B hockey. Playing with them probably wasn’t the smartest decision, because just anatomy. They’re bigger and stronger and I’m 5’2”, weigh 110 pounds. There was just a lot of danger.”

Rerko’s mother insisted that she stick to playing solely against other girls. In addition, Rerko made sure to purchase the safest goalie equipment, as a quality helmet can make a huge difference on the impact of a collision. She’s also had to change the way she plays.

“For players, [they can focus on] keeping your head up,” Rerko said. “If there’s a shot that I know is coming towards my head, I’ll duck. It’s not worth saving it at this point. Just making sure you’re aware of your surroundings.”

As she got more serious about the sport, Rerko started to participate in girls’ showcases for college recruitment. While at a showcase in Massachusetts, a coach for a Boston prep school offered her a spot on their roster, where she played her junior year, taking online classes in the process.

“This all happened at the end of the summer, so I had basically two weeks to pick up and move to Massachuesetts,” Rerko said. “It was very sporadic, but I think it was worth it. I had a lot of fun doing it.”

As Rerko decided on a college to attend, she knew the school must have a club hockey program for her to further her playing career. That’s when she reached out to Jim Napoli, the head coach of the women’s club hockey team at Pitt, where she had already been offered admission.

After meeting Napoli and learning about the program when touring Pitt’s campus, she realized she wanted to spend the next four years in Oakland.

As a first-year goaltender, Rerko was thrust into the starting role almost immediately when the team’s veteran starting goalie experienced medical issues. In her first year, Rerko started every game in net.

“It’s a little remarkable to me, to have to step in right away and play every game,” Napoli said. “And she did a fine job. She works really hard.”

Rerko’s teammates immediately took to her. Sophomore forward Cierra Lutz noted that her confidence in net allows their defense to push forward on offense, knowing they can trust her to protect the net in transition. Also, her skills make the whole team better when the players practice against one another.

Heading into her second season in goal, Rerko looked to develop her leadership abilities on and off of the ice.

“Being a goalie, a lot of people look to you for support no matter how the game’s going,” Rerko said. “We’ve had lots of issues this season of people playing positions that they’re not used to, so that made us have a pretty rough season. I just try to stay as positive as I can, even though things didn’t really go the way we wanted to this season.”

Rerko praised Napoli and the rest of Pitt’s coaching staff for caring about their players’ safety.

“Our coaches are very understanding when people are injured or when they have some type of head injury,” Rerko said. “If they need to miss practice [because of their injuries], then they by all means can miss practice without being punished.”

Napoli attributes resources like the UPMC concussion center, a special division of the UPMC Sports Performance Center located on Pittsburgh’s Southside, as a huge help in making the sport as safe as possible.

“Fortunately, being at the University of Pittsburgh, you’ve got the UPMC concussion center at your fingertips, so you can get the world’s best care,” Napoli said. “[The players] are here to get an education and be successful students number one, and we certainly don’t want something that happens as a result of playing the game to impact that more than it has to.”

Although her school semesters are now filled with classes, practice and homework in Oakland, Rerko has stayed active in SAFEO during the summer. She visits youth hockey teams to talk about her own experiences with concussions and how to recognize symptoms of the injury. This summer, they plan on hosting a hockey camp for kids that will enhance concussion awareness while developing their skills on the ice.

Despite over four years passing since her concussion in the ninth grade, Rerko believes that the injury still impacts her day-to-day life.

“It’s hard sometimes to do school work because I don’t have the same attention span that I used to,” Rerko said. “It’s made me question if I continue to play hockey over the next two years, is it really worth it? I could get hurt again, and it’s my brain. That's kind of more important than playing two more years of hockey.”

Lutz shares Rerko’s concerns about severe brain injuries in the sport. A history of concussions have compounded previous neurological issues of her own, causing seizure-like episodes and frequent nausea. These issues have even caused her to retake classes, as a concussion left her unable to leave her bed her first year of college. She appreciates Rerko’s commitment to the topic.

“Katie is very humble about her devotion to concussion prevention and awareness,” Lutz said, “but it’s a great cause to champion and we’re all very proud of her. It’s been an important part of her life for a long time.”

When she’s done with her undergraduate degree, Rerko wants to continue her education at occupational therapy school. Although she’s gained plenty of experience working with children, she also sees herself practicing on the other end of the age spectrum.

“I worked with elderly patients in the hospital over the summer and I really liked that, so I probably want to work in a nursing home,” Rerko said with a laugh. “So, I guess either elderly people or kids.”

Rerko, a longtime Pittsburgh Penguins fan, has tried to model her game in many ways after her favorite player, former Penguins goalie Marc-Andre Fleury. Like Fleury, whose 180-pound frame makes him somewhat undersized in today’s NHL, she must utilize her athleticism and flexibility in net.

What stands out most to her, though, is Fleury’s ability to lead on and off the ice. She aims to employ Fleury’s work ethic in all aspects of her work.

“Not only is he a fantastic goaltender, but he’s a positive person and you can see that his team really likes him,” Rerko said. “If your teammates like you, it makes it a lot easier to have a better season.”